You can create the same under Settings:

Since I am doing a fresh install the simple answer is to just disconnect the device from the network. I got blind sided accustomed to using the Professional version and having the option to setup a local account regardless of whether the device was connected to the network. 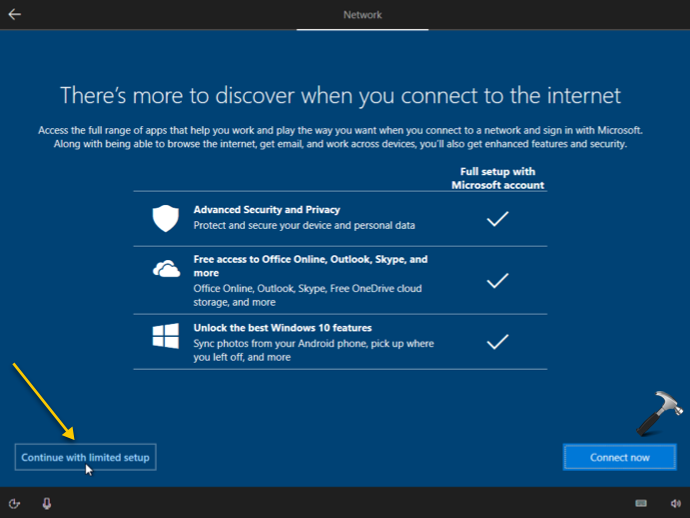 Disconnecting from the Internet during OOBE is definitely the way to go. If you create a local account after initial setup, you're still stuck with a Users directory name based on the first few characters of your email account. The only way around this is to create a new user account with Admin privileges, sign out of the initially created account, sign back in with the new account and finally delete the initially created account.

Does anyone know what websites it's trying to hit during install so that I can possibly always block them (or at least temporarily block them)?

Disconnecting from the internet works except I'm using a PXE server to re-install w10 and that PXE server is connected to the internet and although I could set rules to block the pxe server temporarily from using the internet, I'd rather add some dns block entries to prevent Microsoft from reaching out. I'm hoping they use specific sub-domains that aren't needed for other Microsoft services, but I may be out of luck.

In this specific instance, I had a laptop that came with w10 home, was later upgraded to w10 pro, and then domain joined, needed a reinstall of the oem windows, and the "limited setup" doesn't exist with home.

Disconnecting the network is no longer required. During setup you can pick Personal (not business), and at the bottom left is a non-obvious link button that says something like "Offline account". Click it. then on the next screen there is another link button in about the same place that says something like "Limited Access". Click that. Now you can set a password for a local admin account as desired.

Unfortunately, I think that option is only available if you're installing w10 pro (I see it there), but not w10 home (like most OEMs sell).

I hotspot my phone to do the setup, then when it prompts for an email account turn off the hot spot & click the back arrow it will then prompt for a local account
makes it easier then turning of WIFI for Mutiple users

9 people are following this question.

EventcombMt is not working properly in my windows 10 system

How do I stop Feature update 1903 from installing