Why is this interesting? One of the site developers at one of my customers approached me and said that “Hey, you know we have a couple of internal users who complain about our website performance. They say its always slow and takes forever for pages to load….”. My response was “Ok, what data do you have to prove this is correct”.. the response was “None”

We took the IIS log files and run the following script

The script produced a list of users who had the longest average time for pages to load during the period of the IIS log file. 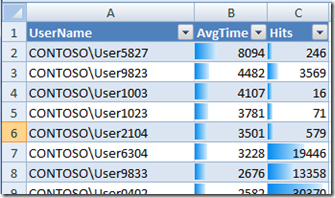 These two scripts gave the site developer enough data to have a dialog about site performance with the end user in a more productive way.