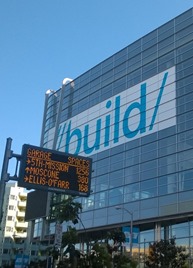 Last week I had the pleasure of speaking at //build/ which is the premiere developer event of the year for Microsoft. As I mentioned in the rollup yesterday, yours truly spoke in the Office & SharePoint developer track. According to the tweets and feedback afterwards, my session went really well. You can watch it here: Developing Office 365 Cloud Business Apps.

Although the Office team did have presence at //build/, it was definitely dominated by Windows, Azure and .NET. As a long-time .NET developer, it was an amazing and electric vibe! As an employee, it was far better than any morale event I’ve ever been to. It was awesome seeing all the positive reactions to our announcements. There was a lot of love given to us .NET developers, and at the same time cross-platform development permeated the hallways.

The larger team that I work for in Visual Studio is responsible for a ton of Visual Studio tools (as you probably know from my posts here), but our team is also responsible for the core .NET framework, CLR, and Managed Languages (VB, C#, F#) among a lot of other things. Boy! Did .NET and languages make a big splash at //build/.

The second day keynote featured the legendary Anders Hejlsberg where he published “Roslyn” (the .NET Compiler Platform) onto CodePlex live and announced the open sourcing of the project. The applause was deafening in the overflow room I was standing in. (Yes there were many overflowed overflow rooms.)

This highlights the change of attitude across all our teams to really embrace open source and cross-platform development in the “New Microsoft”.

As a Visual Studio user, you can install a preview into VS2013 that will switch you to the Roslyn compiler to get the new language features as well as IDE enhancements that Dustin and Mads showed off at their (overflowed) session. Also check out these related Channel 9 interviews.

I also encourage you to read Matt’s post about how you can get started and really understand what you can do with Roslyn: Taking a tour of Roslyn. 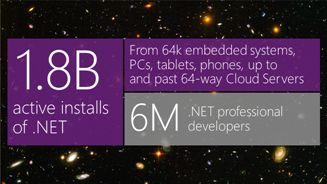 That’s not all for .NET by a long shot.

Did you know that there are 1.8 billion active installs of .NET and 6 million .NET developers in the world? Yep, we’re committed to it.

Soma posted about The .NET Foundation and .NET Platform Innovationthat we are building upon. The .NET foundation is the steward of a growing collection of open source technologies for .NET, maintained by MS Open Tech, who are our partners in this endeavor. Besides the Roslyn project, .NET foundation includes many active .NET projects that we will be contributing to with the community. This includes a big partnership with Xamarin for building cross-platform native mobile apps.

Another big announcement for .NET was the .NET Native Preview, which offers you the performance of C++ with the productivity of C#. The preview release enables you to build Windows Store apps which start up to 60% faster and have a much smaller memory footprint. We will continue to expand native compilation for the range of .NET applications in the future. Read all about it on the .NET Team blog: Announcing .NET Native Preview

Also released as part of the next generation of .NET was another preview of RyuJIT (CTP3), an improved JIT compiler, now with SIMD support. If that sentence doesn’t make sense, read Immo’s post where he explains it all extremely well, even to us mortals: The JIT finally proposed. JIT and SIMD are getting married.

Jay & Habib both had some good sessions and Channel9 interviews with other members of the team on our .NET innovations that you should also check out.

But wait there’s more! So… much… more…

Here’s some more awesome things for .NET developers to bite into.

Of course there is so much more to explore. Check out Channel 9 for all the //build/ content.

You asked for it, you got it. .NET Native, Open, and Cross-platform.

I have to be honest, the weeks leading up to //build/ had many of us running around like chickens with our heads cut off trying to organize all of the release timings with the sessions and keynotes, marketing and PR, web site & blogs publishing, etc. We had so many fabulous releases though and it was amazing to see it all come together. It was definitely worth all the hard work and I couldn’t be more proud of what the team has accomplished.

It’s an absolutely exciting time to be a .NET developer.