This last weekend I spoke at Silicon Valley Code Camp -- the biggest code camp in the world! I delivered two sessions that were very well attended -- I think the room held about 50 people and both sessions were filled. Thanks all for coming!

In the first session I focused on building HTML5-based business apps with LightSwitch and deploying them to Azure. There were some familiar faces in the room, but most of the folks I had never met before so it was great to see new people interested in the technology. Most of the developers there were using Visual Studio already. A big handful had downloaded the Visual Studio 2013 RC so that was great to see as well. One person even followed along (in both classes) as I built the demos. The second session drew a lot more SharePoint developers, understandably, since it focused on the new Cloud Business App project in Visual Studio 2013 that streamlines the way you build custom business apps for SharePoint 2013 / Office 365.

Here are the main things I showed in each session as well as links to the demo projects and slides.

I based this demo on the Contoso Moving Company Tutorial we released back in April. Here we started with a LightSwitch solution with a desktop client and added an HTML mobile companion client to it. I showed:

You can get the slides and demos here.

I based this demo on the Contoso Foods SharePoint Tutorial we released back in April, but instead I used the Cloud Business App project template to streamline the setup of the SharePoint project. I used an Office 365 developer account which you can get for free if you are an MSDN subscriber (or a free trial if you aren’t). Head to https://dev.office.com to get started.

You can get the slides and demos here.

Also here are some more resources to explore:

After my sessions I was in a hurry to make it to Game 2 of the ALDS in Oakland (Go A’s!!) but I did have time to chat for a few minutes and take a photo with many of the Microsoft MVP speakers that were there. Great seeing you all! 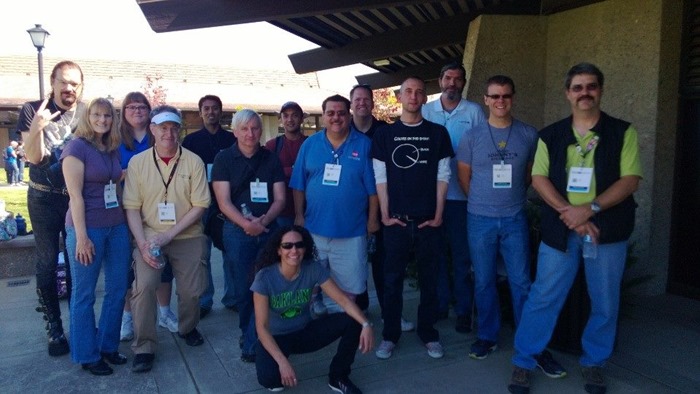