We've just posted updated versions of the HD Photo Plug-ins for Adobe Photoshop Software to the Microsoft Download Center.  There are now versions for both Windows and Macintosh OS X.

There is an updated beta for Windows Vista and Windows XP, plus a new beta for both Intel and PPC Macs running OS X.

In addition to the direct links above, you can always find the various HD Photo downloads by going to the Microsoft Download Center at https://www.microsoft.com/downloads and searching for "HD Photo".

Based on a lot of really good customer feedback, we've redesigned the encoder options dialog box, separating the basic and advanced controls in two separate modes.  This is more consistent with similar dialogs in Photoshop, allows the dialog to be  smaller, and makes it a less confusing.  We also did some other re-arranging and general clean-up of the dialog user interface, with better consistency among related controls.  The pixel format control will now only offer the pixel formats that are compatible with the current image mode in Photoshop.  You can save to any of the supported HD Photo pixel formats, but you may first have to convert to the correct image mode from within Photoshop.  The encoder options dialog also remembers it's state, so it will re-open in the same mode and with the same settings as the last time it was opened within the session. 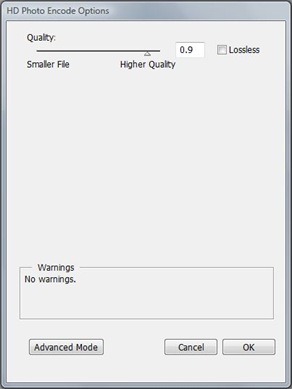 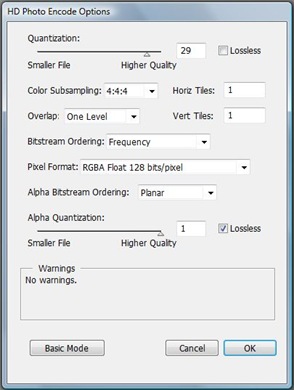 Clicking the "Advanced Mode" button switches the dialog to a different set of encoder controls.  Rather than the more simplistic Quality setting in Basic mode, the Advanced mode provides full control over all the detailed encoder settings.  These settings are fully documented in the included ReadMe file, and we've talked about them in a previous post on this blog.

We also implemented a major architectural overhaul of the underlying codec and memory management.  These changes significantly reduce the memory requirement to encode and decode an image, improving performance and allowing support for much larger images without encountering memory limits.  This was a fairly major change, and the main reason why it's taken us longer than we planned to ship this beta.

The tiling options in the previous beta did not really operate correctly and that's been fixed.  We fixed a bug when saving to an HD Photo file from a RAW file that was opened in Photoshop from Lightroom.  There were a handful of other more obscure bugs that have also been fixed.

The Setup program has also been completely overhauled.  It will now automatically locate the installation of Photoshop CS2 or CS3 and install the plug-in directly to the appropriate directory.  If you have both versions, it will be installed in both places.  It also creates an entry under the Programs menu to provide easier access to the ReadMe documentation file and the End User License Agreement (EULA.)

Did You say Mac?

The encoder options dialog is functionally identical to the Windows versions, with all the same options and controls. 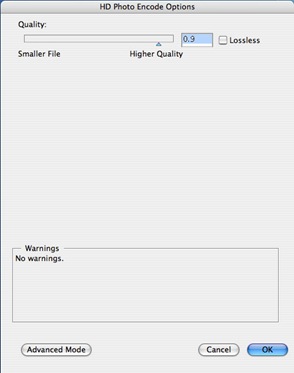 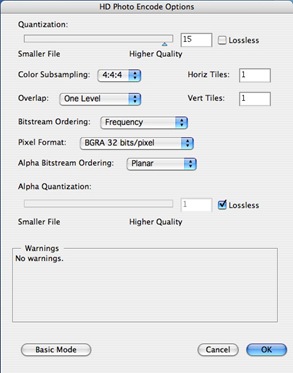 One very cool feature with the Mac version is support for thumbnails in the OS X finder.  OS X doesn't currently HD Photo as a native format.  However, whenever Photoshop writes and HD Photo file, it also creates a thumbnail on the resource fork in a compatible format for OS X.  The result is great looking thumbnails for HD Photo files in Finder.  Very cool! 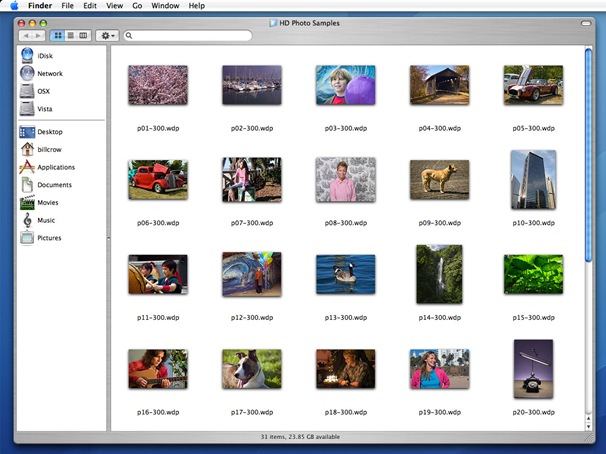 The Mac installation package is a disk image containing the documentation and separate installers for both Photoshop CS2 and CS3.  Run the appropriate installer for your version.  It will only install if it finds the compatible version of Adobe Photoshop.

Yes, these updated releases are still officially in BETA mode.  We believe that these are the final versions, but because we made some significant changes and this is the first public release of the Macintosh version, we elected to keep them in BETA mode for this release.  We're continuing to do additional testing, and as always, we welcome any comments, issues, bug reports or other feedback.  We're also very interested to hear if you run into any problems installing the plug-in on either Windows or Mac OS X.  You can post your feedback via this blog, or send it to the "hdphoto" email name at microsoft.com.

We're very excited to be able to release these updated plug-ins, especially with the addition of support for Mac OS X.  Have fun and let us hear your comments.