This is an issue on which I've been chasing my own tail for some time, it seems.  Remote deployment of BizTalk applications from Visual Studio 2005 to our development BizTalk 2006 server (a VMWare virtual server) does not work, which means all of the BizTalk developers (all two of us, previously) had to log onto the server and develop within Visual Studio on the server.  While annoying, this wasn't a terrible deal when there were two of us doing BizTalk development.  Now, counting contractors, there are seven (six, I suppose, since Friday is my last day at this company).

Richard Seroter had previously written this blog post, which we thought would resolve our issue (based on this Usenet thread); however try as we might, it didn't fix our issue.  I completely gutted and re-installed MSDTC in as many ways as I could think of with no luck.

Today I was going to request the server team to build a new VM from scratch.  No clone, no image.  Since I knew I'd have to justify this somehow, I started digging for references, and happened across this post (from 2005, sadly), in which a commenter suggested removing the HKLM/Software/Microsoft/MSDTC registry key between uninstalling and reinstalling MSDTC.  Voila!  That worked!

So, the final resolution for this server was as follows: 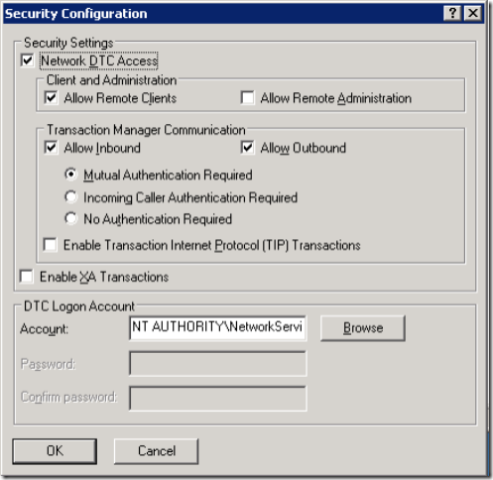