The following post was contributed by Benjamin Rampe a Senior PFE working for Microsoft.

While studying up on Windows 10, I came across a technique that has been shown to reduce the time it takes to apply an OS WIM to disk by 20 – 50%*.  That’s a fairly significant savings in time and the implementation of this technique is relatively easy and does not require you to change how you deploy Windows.  Believe it or not, the savings come from adjusting the OS power management settings during a deployment.  While there are multiple ways to implement these power management settings, below I’ve outlined what I consider the most non-intrusive to existing deployment methods. 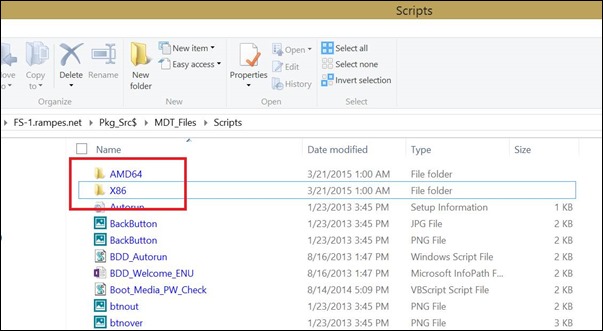 2. Insert a step early in the task sequence to set the power management scheme to “High performance”

3. After every “Restart Computer” step within the Preinstall, Install, and Post Installphases, insert another action to reset the power management scheme to “High performance” using the PowerCfg.exe from the MDT Files package.  These 3 phases all run under WinPE which does not persist the power scheme between reboots.  For example:

4. After the first “Restart Computer” step within the State Restorephase, insert another action to reset the power management scheme to “High performance” using PowerCfg.exe from the native (full) Windows OS as shown below.  (NOTE:  Perhaps a better alternative to implementing this step would be to set the power scheme to High performance prior to image capture which would provide the added benefit of using the High performance scheme during PnP enumeration, driver installation, etc.):

5. Finally, set the power management scheme to the scheme you wish for the system to use after the deployment.  In the example below, the GUID for the Balanced power scheme is set.  GUIDs for the built-in power schemes in Windows can be found here.  To set the GUID for any custom scheme, use “PowerCfg.exe –L” to obtain the scheme’s GUID and paste into the Command line for the action: 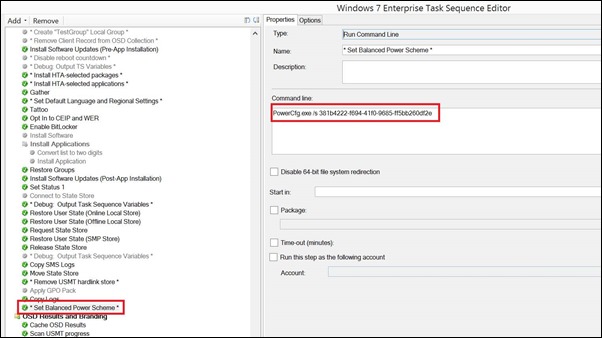 Early results are very promising using this technique, we would love to hear if this improved the speed of your deployment via the comments.

Disclaimer: The information on this site is provided "AS IS" with no warranties, confers no rights, and is not supported by the authors or Microsoft Corporation. Use of included script samples are subject to the terms specified in the Terms of Use .