Security implications of upgrading to Windows 10

Windows 10 has new security features that protect the system from malicious code being inserted in to the system startup process. The foundation of these security features are UEFI and Secure Boot. UEFI requires a new disk format and device firmware changes. These requirements effect the choices and configuration options when migrating from Windows 7 to Windows 10.

Unified Extensible Firmware Interface (UEFI) controls the boot process of the PC. UEFI can operate in one of two modes: UEFI mode or BIOS-Compatibility mode. When operating in UEFI mode, UEFI verifies the signature of the Operating System bootloader to ensure that no malware (rootkits) have been introduced. When in BIOS-Compatibility mode, UEFI allows operating systems to boot in the same manner as they did under the older BIOS system.

Secure Boot is a feature of UEFI that insures a personal computer will only boot software that is trusted by the manufacturer. When the PC starts, the firmware checks the signature of each component of boot software: this includes firmware drivers (option ROMS) and the operating system boot loader. If the drivers or boot loader are not signed with a certificate that is in the UEFI firmware database, the system will not boot. 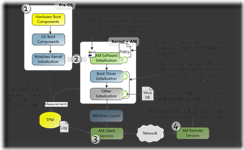 Device Guard is a combination of enterprise-related hardware and software security features, that when configured together, will lock down a device, so that it can only run trusted applications. If the application is not trusted it cannot run period.

Device Guard uses the new virtualization-based security in Windows 10 Enterprise to isolate the Code Integrity service from the Microsoft Windows kernel itself, letting the service use signatures, defined by your enterprise-controlled policy, to help determine what is trustworthy. In effect, the Code Integrity service runs alongside the kernel in a Windows hypervisor-protected container.

Introduced in Windows 10 Enterprise, Credential Guard uses virtualization-based security to isolate secrets so that only privileged system software can access them. Unauthorized access to these secrets can lead to credential theft attacks, such as Pass-the-Hash or Pass-The-Ticket.

UEFI was available in the Windows 7 timeframe. However, Windows 7 systems typically used UEFI in BIOS-Compatibility mode and MBR disks. This means, that to migrate a Windows 7 system to Windows 10 and take advantage of the new security features, the disk must be repartitioned using the GPT format. The system firmware will also have to be configured to use UEFI mode. Depending on PC vendor, it may be possible to automate the firmware configuration during the ConfigMgr OS deployment task sequence. Repartitioning, during an OS deployment task sequence, requires the system to be on a LAN and that sufficient space is available on a ConfigMgr State Migration Point in order to back up any data on the system. It is possible to detect if a system is on a LAN with sufficient storage, to do the repartition and firmware reconfiguration, or just upgrade, without repartition or firmware reconfiguration, if the system is remote.

This post was contributed by David Hornbaker, a Senior Consultant with Microsoft Services.

Disclaimer: The information on this site is provided “AS IS” with no warranties, confers no rights, and is not supported by the authors or Microsoft Corporation. Use of included script samples are subject to the terms specified in the Terms of Use