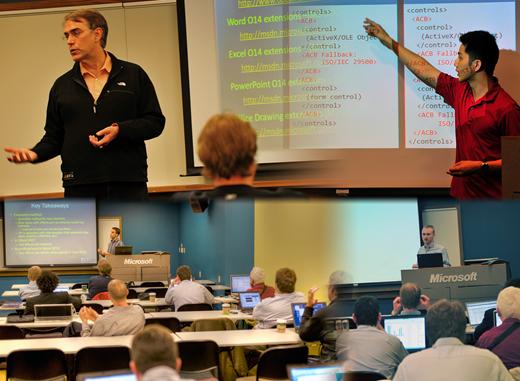 If you’re using the Office 2010 Technical Preview and you’re the type of person who likes to look closely at the markup of documents that you’ve created (as most readers of this blog are), you may have noticed some new namespaces that Word, Excel, and PowerPoint used for new functionality such as sparklines in spreadsheets or presentation sections.

Last Friday, at a DII workshop in Redmond, program managers from the Office product groups explained how these new namespaces are used in Office 2010.  This event was scheduled for the day after the SC34 Plenary which took place in nearby Bellevue, so that interested SC34 members could easily attend.  In addition to the SC34 attendees, several US-based ISVs were also present, which led to a good roundtable discussion in the afternoon with a variety of perspectives represented.

Office 2010 takes advantage of two types of extensibility mechanisms in ISO/IEC 29500: extension lists and ACBs (alternate content blocks).  These extension points, which are documented in the text of the standard (see Part 3), provide implementers with a standardized way to innovate and add new functionality while maintaining conformance to the standard itself.  The core concept is that an implementer can provide more than one representation for an object (a shape on a slide, say), and then consumers of that document can render the version that they understand.

The workshop featured four presentations on how Office 2010 uses ACBs and extension lists.  Word/Excel/PowerPoint program managers (Zeyad Rajabi, Chris Rae, and Ric Bretschneider, respectively) explained examples from each of those products, and Nick Chiang of the graphics team covered some general concepts about how graphics are handled in Office 2010.  The presentations included demos of various new types of functionality in Office, followed by deep-dive explanations of the markup used to serialize this new functionality.

All of the presentations are now available for download here, and documentation of the specific extensions used by Office 2010 can be found in the Microsoft Office File Formats section of the Open Specifications Developer Center on MSDN::

After the presentations on Friday, we had a roundtable discussion of the topics covered during the day, and a variety of related topics.  Here are some of the points of discussion that I found most interesting:

It’s great to have so many experts in one room, sharing their thoughts on these topics, and I learned a lot from the wide variety of opinions expressed.  What do you think?  Do you have a strong opinion on any of these topics?  Let me know in the comments below.