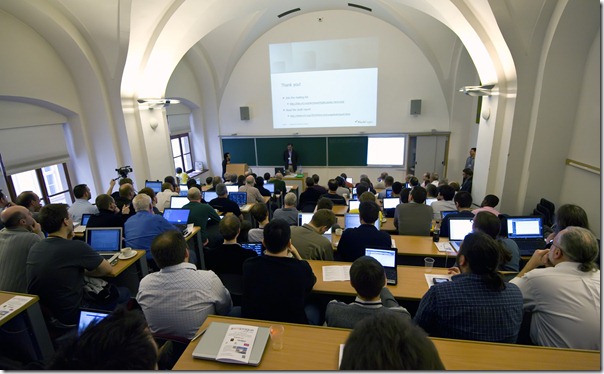 I attended the XML Prague conference over the weekend, where I had the opportunity to see some great presentations, meet some interesting people, and drink plenty of Czech beer. The latter being a requirement for any trip to Prague, of course!

The conference was scheduled on the weekend between meetings of the W3C XSL working group last week and the ISO/IEC JTC 1/SC34 working group and plenary meetings that are taking place this week, which made it convenient for SC34 members to attend as part of the same trip to Prague. Today at the SC34 WG4 meeting we have several attendees who were also at XML Prague, including Jirka Kosek (Czech Republic), Mohamed Zergaoui (France), Murata Makoto (Japan), and my colleague Chris Rae and I, who are participating in SC34 as members of the Ecma TC45 delegation.

As you can see from the conference agenda, there were presentations on a wide variety of XML topics over the two days. As noted in the closing keynote (more on that below), there was a general theme of “XML in the browser” that cut through many sessions, as well as sessions on other topics such as EPUB, JSON, DITA, and others. The room was packed, with nearly every seat taken and extra chairs lining the aisle, for the opening session by Norm Walsh (above) that covered the history of HTML and XML and some of the use cases that have been considered by the W3C TAG HTML/XML Task Force. And the room stayed packed, all weekend long, with none of the drop-off in attendance many conferences experience.

After a full day of presentations on Saturday, we all walked up the hill behind Prague Castle to the Strahov Monastery brewery, for dinner, beers, and a demo competition. The view of Prague from the monastery was spectacular: 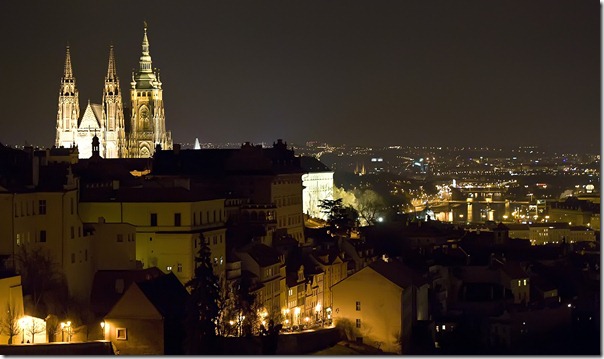 Sunday’s agenda was kicked off by Michael Kay’s “XML in the browser” presentation, which covered the history of XSLT and proposed how XSLT's declarative event-driven approach could be used to deliver the sorts of interactive functionality that has traditionally been the domain of JavaScript. Saxon CE, which allows you to run XSLT 2.0 in any web browser released in the last year, is now available in alpha release on the Saxonica web site.

There were many other great sessions, and you can see the videos when they’re posted on the web site, and/or download the conference proceedings to get all of the details. WG4 convenor Murata Makoto, wearing his EPUB hat (he is co-convenor of the SC34 ad-hoc group looking into EPUB standardization), provided an overview of EPUB and covered the current status of EPUB3.

Michael Sperberg-McQueen’s closing keynote was a masterly speech. He started with a story of Vaclav Havel characterizing the core of a crisis as being caused by cold impersonal machinery that was set against the aspirations of free-willed individuals. He then used this story as an allegorical backdrop for an exposition of the tension between the cold impersonal interests of the browser vendors and the original aspirations of many in the XML community, building up to an exhortation to put XML in the browser “whether they want it there or not.” I can’t describe it in a way that does it justice, but the video should be on the XML Prague web site soon, and it’s worth checking out.

Overall, XML Prague was a great learning experience for me, a 2-day crash course in the state of XML technologies and various creative ideas about how those technologies will evolve going forward. Thanks to Mohamed and Jirka for suggesting we attend!