Last month, we modified the F12 tools navigation interface from a vertical layout to a text-based horizontal layout, removing the icons and replacing them with the tool’s names. This change is now part of the F12 developer tools for Windows 10 Technical Preview.

We have also added the capability to change the zoom level on the UI. Using the Ctrl + + and Ctrl + - keyboard shortcuts, you can now increase or decrease the zoom.

In response to your feedback, we added the ability to add XHR breakpoints. When enabled, the debugger will break whenever all the response data is available (readyState property equals 4). You can enable XHR breakpoints directly on the Breakpoints pane.

We have added CSS source maps support to the tools so that when using LESS or SASS to build our Web site or app, you can now view and navigate to the LESS or SASS source file directly, rather than the generated CSS file.

The tools will now display links to the original LESS or SASS files directly in the DOM Explorer tool. 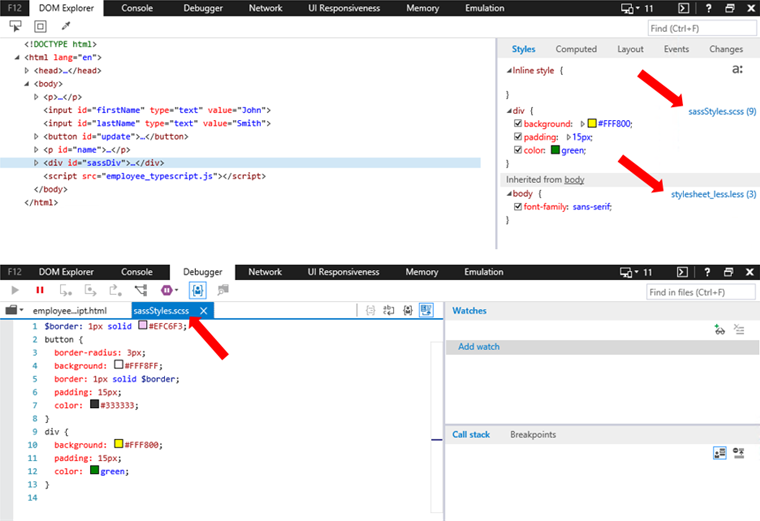 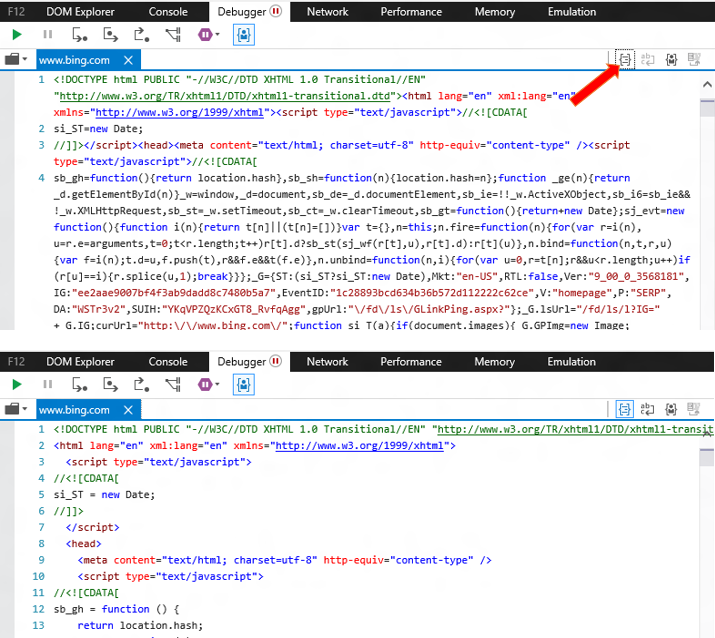 We have added a “View in DOM Explorer” feature to allow you to quickly move from a selected DOM element in the Console tool, to the actual node in the DOM Explorer. This is especially useful where the Console and DOM Explorer tools are used together as shown below.

We see the UI Responsiveness tool as the one stop for all your performance related needs. We’ll be covering the tool more deeply in the future but all the same great information that you have come to expect out of the previous UI Responsiveness tool can be found inside the Timeline tab and the “JavaScript call stacks” tab (image below) provides functionality similar to the old JavaScript profiler. 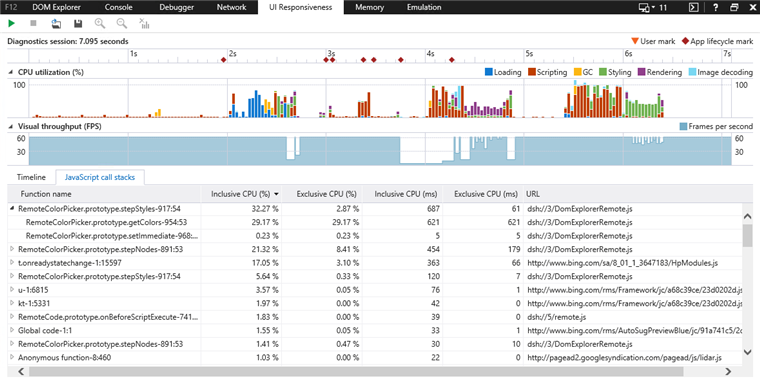 Just as we did in the console, the UI Responsiveness and Memory tools also take advantage of the DOM Explorer integration. When you select an event that is logically associated with a DOM element (e.g. a DOM event handler, layout or style calculation), the associated element will be highlighted on the page, which makes it much easier to identify what occurred (e.g. which div element triggered a mouseover event).

If you want to view more details about the associated element such as the applied CSS rules, you can right-click it and select “Show in DOM Explorer” in order to navigate to the element in the DOM Explorer tool.

Additionally, CSS source maps are also supported in the UI Responsiveness and Memory tools too, so that you can link to and view the file in the debugger, as shown here. 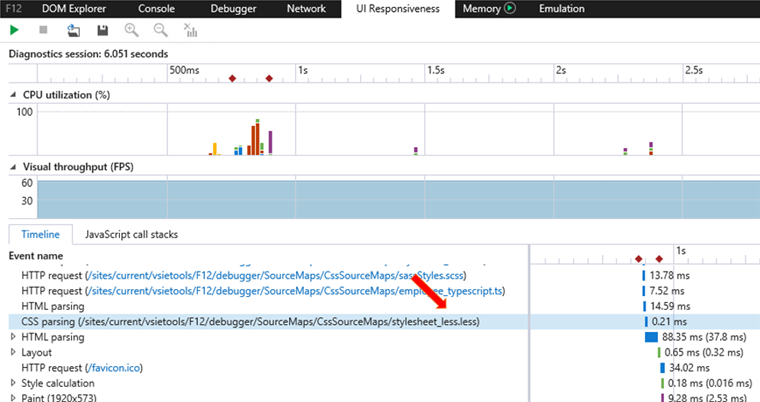 The preview comes with an entirely refreshed and updated Network tool. This tool not only has all the previous features in a cleaner, more easily understood way, but we’ve included many requests from developers, such as auto-start capturing and content type filtering.

Given its preview state, there is still more to come from the tool. Some examples are HAR export, timing information, Response payload “Pretty Printing” as well as reliability and overall refinements. We plan to talk more about the network tool soon, but in the meantime, we encourage you to take this preview build for a spin and provide as much feedback as you can!

Remember we value your feedback and we want to encourage you to continue providing suggestions, bugs, or requesting experiences you believe can make your daily development activities easier and more impactful. Let us know your thoughts about all the features announce today by leaving a comment below, reaching out on Twitter, or visiting our User Voice site to voice your opinion on what we should work on next!