As I mentioned in my previous blog post, one of the policies that is determined based on the audio categories is related to power savings. In order to lower power consumption for audio, we need to wake up the CPU less frequently and put less load on the CPU (by offloading more functionality to H/W that is dedicated to audio, such as the audio codec or the audio DSP). This feature is called Hardware-Offloaded Audio Processing (HAP) or simply audio offload.

In order to explain this functionality better, it makes sense to start by explaining the first step while streaming audio: the application writes the audio data in a buffer, so that it can be processed by the audio stack. There are 2 available buffer sizes:

There is a trade-off between using each of the two buffer sizes.

The 10ms buffer leads to:

In general, we want to use this buffer for anything that requires low latency, such as VOIP calls, alerts, sound effects, etc.

The 1 second buffer leads to:

In general, we want to use the 1 second buffer, when we play audio files or movies. In that case, we want the battery to last as long as possible and waiting for a few seconds until the beginning of an mp3 file or a movie is not important.

Hopefully, with the above use cases, it now makes sense why we’ve tied the 1-second buffers with the usage of the following 2 categories:

More specifically, one of the requirements in order to use the 1-second buffers is to use the two categories above. However, things become a little more complicated, when we take into consideration that not all H/W and drivers support this feature, and when we include both “screen-on” and “screen-off” scenarios.

So, here are the requirements, in order for an application to use the 1-second buffer, when the screen is ON:

In addition to the all the above requirements, in order for an application to use the 1-second buffer, when the screen is off (also known as Low Power Audio or LPA), the following requirements need to be met:

Intel has a whitepaper for LPA at https://software.intel.com/en-us/articles/low-power-audio-playback-windows-store-whitepaper

Apart from waking up the CPU less often (which is achieved by using a larger buffer), in order to achieve lower power consumption, we also need to ask the CPU to do less work. In the diagram that I included in my previous post, I showed that the audio data is passed from the application to the Audio Device Graph (audiodg). AudioDG loads the Audio Engine (AudioEng), which allows 3rd party dlls called APOs (Audio Processing Objects) to process the audio stream. Actually, this is the correct path when we use 10ms buffers. However, for 1-second buffers, Windows expects that all the processing will be done in H/W. As a result, for Windows 8.1, we do not load APOs, when we use the offload pin (1-second buffers). Here is a diagram that shows this: 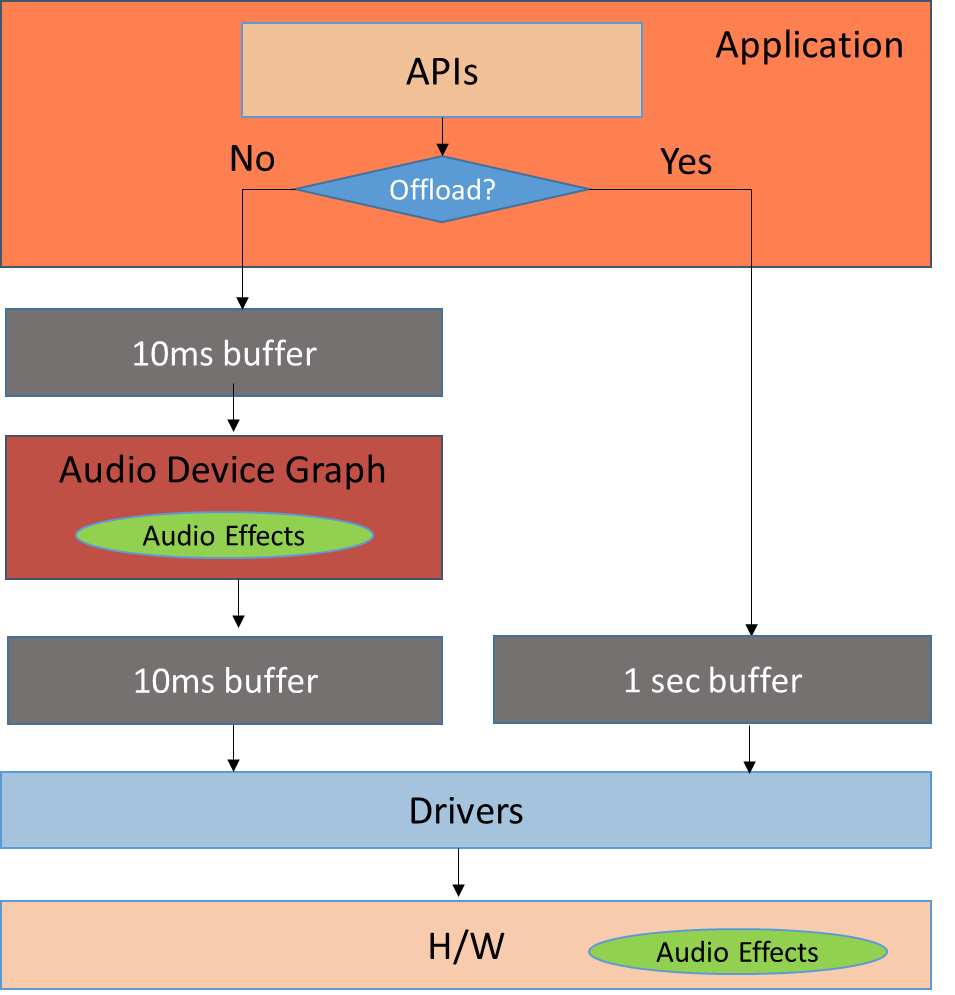 Here I wanted to clarify that audio effects can be implemented:

FAQ: Why is offload not supported for Win32 apps?

One more point that I’d like to make here is that Windows only requires drivers to support 2 offload pins. It’s up to H/W developers to determine, if they want/can support more. Each offload pin corresponds to one stream that can be offloaded. So, if the H/W has 2 offload pins, this means that 2 streams can be offloaded (i.e. use the 1-second buffer) at any point in time. The 3rd stream (and all streams after that) that tries to use the offload pin will actually be switched to the non-offloaded path (10ms buffers). Implementing an offload pin takes a lot of H/W resources, that’s why most H/W cannot simultaneously support many (i.e. 3+) offloaded streams.

So, this makes it easier to understand why we offer support for offload only to Store apps and not to Win32 apps. Most Store apps are not background-capable, so we can suspend their audio streams when they go into the background (or are minimized, etc). This means that the offload pin that they occupied is now available for other apps to use. However, Win32 apps do not get suspended when they go into the background. So, if a Win32 application, such as Windows Media Player is sitting in the background with a paused stream, we cannot take its offload pin and make it available to other apps. Since most Win32 apps have a long process lifetime (i.e. users let them run in the background), if we allowed them to offload audio streams, then they would easily grab the two offload pins and keep them unused for long periods of time.

FAQ: Can a system have only S/W audio effects and support audio offload?

The last topic that is often asked from H/W manufacturers is whether the following combination is possible: