In TFS 2010, we’ve added a new organizational concept called Team Project Collections.  This abstraction helps with flexibility in administration scenarios.  One TFS 2010 server can host multiple collections of Team Projects.  When you’re connecting to a TFS 2010 server, think of a collection as a logical server.  That is, with TFS 2010 you’ll connect to a collection of projects, whereas with previous releases you connected to the actual server name.

In Team Explorer 2008 The “Add Team Foundation Server” dialog box looks like this: 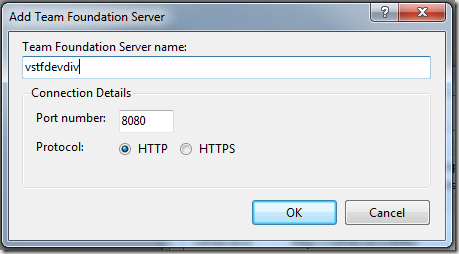 Here, the text “vstfdevdiv” is the name of the TFS 2008 server.  When you click OK, you’re presented with list of available Team Projects to choose from.

Note the differences.  Here, the URL refers to the server name, the server’s port number, the web application’s path (“tfs”), and the name of the Team Project Collection you’re connecting to (“VSTFDF”).  Once you click OK, you’ll see the familiar list of available Team Projects to connect to.  Also, note you'll need to install VS 2008 SP1 on top of Team Explorer 2008 in order to be able to enter the full URL.  Otherwise, the dialog will complain that you've entered invalid characters for the server name.

Important: As you'll see in the comments below, you must be careful not to leave a trailing backslash '/' in the URL.  If you do, Team Explorer will fail to connect and you'll get an error message stating "Team Explorer is Busy...".  This was unfortunately introduced in the Team Explorer Forward Compatibility Update.

If you’re connecting to a TFS 2010 server from a Team Explorer 2010 client, you only need to enter the server name since 2010 clients know about the new abstraction layer in 2010 servers.