Windows Server 2012 and Windows 8 include a new set of performance counters that can greatly help understand the performance of the SMB file protocol. These include new counters on both the server side and the client side.

In this post, I wanted to call your attention to the new client-side counters that show the traffic going to a specific file share. In the example below, we see the performance counters on a computer called FST2-HV1, which is accessing some files on the VMS1 share on a file server cluster called FST2-FS. This is actually a Hyper-V over SMB scenario, where a VM is storing its VHDX file on a remote file share. I started a light copy inside the VM to generate some activity. 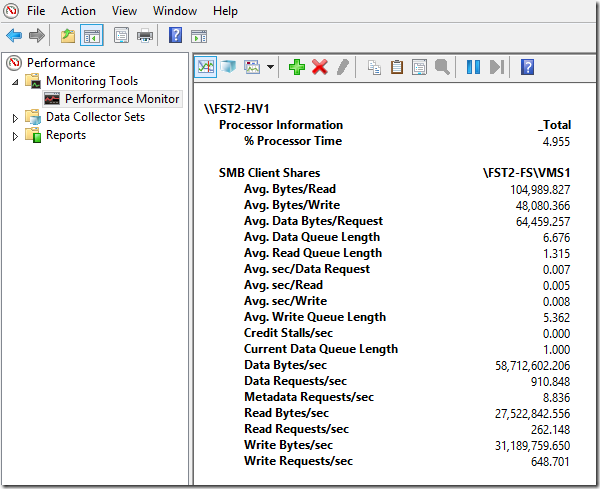 This simple set of counters offers a lot of information. If you know how to interpret it, you can get information on IOPS (data requests per second), throughput (data bytes per second), latency (average seconds per request), IO size (average bytes per request) and outstanding IOs (data queue length) . You can also get all this information for read and write operations.  There’s a lot you can tell from these data points. You can see we’re doing about 910 IOPS and we’re doing more writes than reads (648 write IOPS vs. 262 read IOPS). However, we’re doing larger reads than writes (in average, 104KB reads vs. 64KB writes). Reads are faster than writes (5 milliseconds vs. 8 milliseconds). In case you’re wondering, the workload running here was a simple copy of lots of fairly large files from one folder to another inside the VM.

If you’re familiar with the regular disk counters in Windows, you might notice a certain resemblance. That’s not by accident. The SMB client shares performance counters were designed to exactly match the disk counters. This way you can easily reuse any guidance on application disk performance tuning you currently have . Here’s a little table comparing the two sets: