This post is authored by Joseph Sirosh, Corporate Vice President of the Data Group at Microsoft.

A few months ago, I was trying to find a clever way to illustrate the power of machine learning to software developers at Microsoft’s //BUILD conference. So, using the face analysis API we had recently published on the Cortana Analytics Gallery, we built the web site How-Old.net that detects faces in photos and guesses age and gender. When we showed it off at //BUILD, the application went viral, and over 85 million users submitted over 500 million images to test it, and to mock and try to fool the application. It became a social media sensation.

Then, Coca-Cola came calling with an off the wall campaign idea. With the 100-year anniversary of their class Coca-Cola contour bottle coming up, Coca-Cola in partnership with their media agency, Universal McCann, wanted to mark this milestone in a fun and memorable way with their consumers. Their question was whether we could detect the glass Coca-Cola contour bottle in pictures using our machine learning technologies.  Coke wanted to invite fans to upload a selfie with the bottle to How-Old.net. The site would detect the bottle and the face, and present an age for both the bottle (100!), and the person in the photo.

Now, it isn’t easy to detect and recognize Coca-Cola bottles in images. My Data Science team set out to see what we could do to tackle this challenge with machine learning. The first detection model we created was useful, but could be improved: it detected Coca-Cola bottles only if they were occupying a very large part of the image. If the picture was of a person holding a bottle, the model sometimes missed it. We then worked to refine and improve the model by splitting the problem into two distinct machine learning challenges. First, we employed an “interest-point matching algorithm” to locate the Coca-Cola logo wherever it is in the image. Then, we used a Deep Neural Network to detect whether a bottle is present in the area surrounding the logo.

As part of this process, we wanted to create a constant feedback loop with the Coca-Cola and Universal McCann teams, to evaluate how well the model was performing as we developed it. So we created a testing application with a very simple interface to gather feedback from users about the accuracy of the model. Users testing the site could then tell us if the recognition was successful, and if not, send feedback to identify the bottle in the picture to teach and improve the machine learning system. 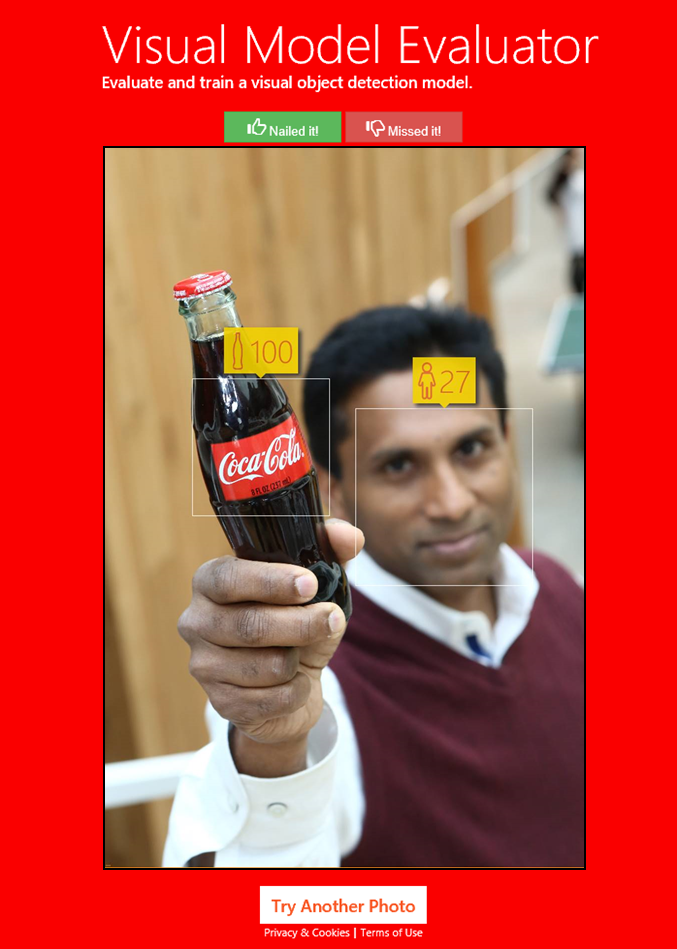 After a few iterations of development and testing with users to improve the accuracy of bottle recognition, the model was integrated into the How-old.net website. The integration was simple – it was just a single API call to a REST API operationalized on Azure.

Want to see how it works? If you go to how-old.net, you can play to unlock the special Coca-Cola experience by uploading your image of a Coca-Cola bottle with a visible logo and see what happens. To get the best results of this original experiment for the #CokeBottleBirthday, you’ll want to upload a high quality image with a clearly visible Coca-Cola logo.

For Coca-Cola this is a fun way to have customers show their love of Coke products. For Microsoft, we’re delighted to bring more of what we’re doing in advanced analytics to people’s everyday experiences. To learn more visit the Cortana Analytics Gallery.