You’ve been reading about our goal to make great looking documents easier in Office 2008, and this includes the document graphics you use to express ideas and emotions. The Art of Office is a reminder that picture formatting and drawing tools are well-established in the Office suite, but Office 2008 takes this to a new level. First, let’s take a look back.

A long, long time ago (before Office 97-98), Word, Excel, and PowerPoint each had their own individual drawing engines for creating graphics. Actually, if you go too far back you end up with just PowerPoint’s drawing engine, which was richer in many ways than what Word and Excel first derived, and ultimately became the model for the shared drawing engine in Office 97-98, code-named “Escher”.

Escher brought a detailed array of shapes, lines, WordArt, and formatting choices to the Office suite. It was powerful if you could master it, but it was also relentlessly easy to create boring presentations and diagrams. Default objects tended to be bland, and it could take several minutes of formatting objects to awaken the inner beauty of Escher. For Mac Office, our recent releases have made strides toward better document graphics with soft shadows and improved transparency, but the opportunity still remained for dramatic improvement: smarter defaults, richer formatting options, and a more powerful rendering engine.

Microsoft Office 2008 for the Mac, like its sibling Microsoft Office 2007 on Windows, introduces the new OfficeArt engine, called “Escher 2.0” internally. OfficeArt is a complete refresh of the Office drawing engine with the goal of making it easier and quicker to create modern, vibrant document graphics across Word, Excel, and PowerPoint. It was important to use the same underlying engine as Office 2007 to provide compatibility for document objects and formatting options, though under the hood we employ Quartz and other Mac OS X technologies for rendering and some enhanced features.

The “Quick Styles and Effects” panel in the Formatting Palette provides a hub of one-click formatting presets to style the OfficeArt graphics in your documents, spreadsheets, and presentations. Here you'll find one-stop shopping for soft shadows, glows, reflections, 3-D effects, and text transformations. Choose a Quick Style that applies a designer set of formatting choices together. Above, in a single click on a picture Quick Style, I have applied a white border, shadow, and 3-D rotation to a photo of my son for a nifty layout on a cover page. 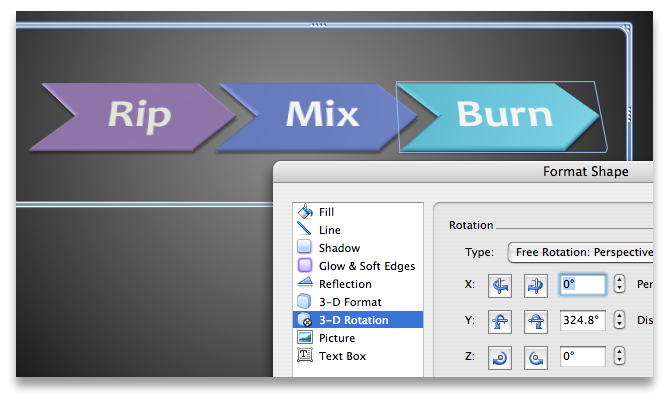 You can tweak additional detail in the Format dialog, with your changes updating graphics in the document as you make them, without leaving the dialog. 3-D rotation and formatting has been updated to provide true 3-D renderings, with optional bevels and contours. Text on OfficeArt objects has its own Format dialog with the same kind of power - add a gradient fill, reflection, or shadow to the text directly.

The OfficeArt formatting that you can put on shapes is also available for pictures, charts, and SmartArt. Your graphics can also adopt the document theme you’re working with, including fonts and color scheme, providing a unified look and feel. You’ll learn more about SmartArt and themes in Office 2008 in this blog as we continue the Sneak Peek.

With a few clicks, you'll add polished graphics to your document, or explore a little more and unleash your inner artist. OfficeArt is an amazing toolbox for communicating your ideas, and it’s a pretty good sandbox for playing with your ideas, too.