How To: Publish Files Which are not in the Project

This wouldn't be an issue if the ClickOnce project were able to deal with Project Output Groups like a setup project can. Hopefully I will get to that in a later post, but for now let's keep it a little more simple: is there some way to include all of the files in a given directory in the ClickOnce publish? This is, after all, how mage operates. The answer is "yes", if you are willing to make some by-hand modifications to a project file. I won't be dealing with assemblies in this post; the need to do so isn't as pressing: I think it's more rare for an application to require a lot of assemblies as references that aren't adequately addressed with the current system for dealing with references. Indeed, you can think of project-to-project references as similar to project output groups, and other references match the "link" analogy, as references are not copied locally and then dealt with statically by the project system. Instead, I want to focus on how those assemblies which may require their own content files can make sure those are deployed with the ClickOnce application. 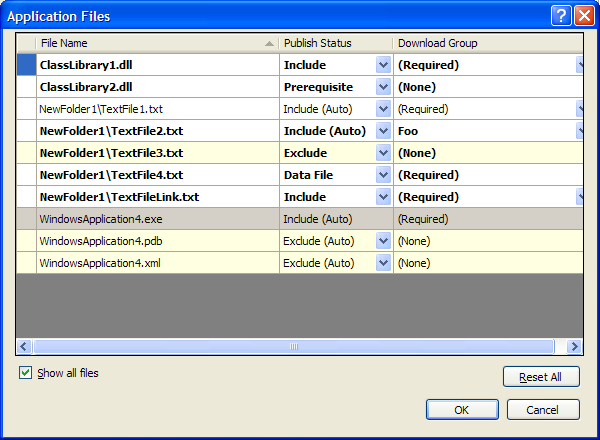 Viewing the contents of the project file, we see this:

All sorts of observations can be made:

Now that we have some idea of how files are included in output, let's see how they are applied by MSBuild. To do that, we start by opening Microsoft.Common.targets. Performing a search for @(PublishFile), we see the following entry:

This ResolveManifestFiles task takes all sorts of information (including PublishFile items). It returns the OutputAssemblies and OutputFiles as _DeploymentManifestDependencies and _DeploymentManifestFiles items, respectively. These items are then used by the GenerateApplicationManifest and a pair of Copy tasks within the _CopyFilesToPublishFolder target. Before we latch onto these values to publish files not in the project, let's see what sort of metadata the items carry along.

You could write your own task to figure this out, or you could take my word for it: here is the relevant metadata names for _DeploymentManifestFiles:

It's a similar group to what was written for PublishFile items. It appears that (for files) PublishState was used mapped to IsDataFile by the ResolveManifestFiles task. The FileType metadata was used used to break all PublishFile items into the assemblies and files group.

Let's check out the metadata values from these names. Let's modify the winform project file to display all of this metadata. Unload the project within Visual Studio and edit it with the following info:

After publishing, the output window shows (amongst other things):

So to add additional files to our output, we need only figure out how to generate new _DeploymentManifestFiles items. It turns out this is easy enough. Consider the following piece of information written into the project file:

These statements take all of the jpg files in my My Pictures directory, stores each item in a AdditionalPublishFile. Then as part of BeforePublish target, the PublishDirectoryFile are used (via the CreateItem task) to pre-populate the _DeploymentManifestFiles items. The CreateItem task sets the necessary metadata for _DeploymentManifestFiles: TargetPath, Group, and IsDataFile. The Touch task is used to make sure that GenerateApplicationManifest task is re-run as part of the publish process. Touch modifies the write time of the primary executable. This file is an input to the GenerateApplicationManifest task, and with a write time later than the write time of the application manifest (the task output), MSBuild will not skip the task. Publishing the project shows that these files are indeed written into the application manifest. Furthermore, the publishing service makes sure these files are published to the remote server. You can use your own MSBuild magic to include which ever files you want to include.

One thing to note: I have only tested this on VS 2008, and I don't know how well things will work on Visual Studio 2005. My expectation is that the manifest generation should be basically the same; however, its possible the files will not be automatically published with the application.

One final note: strictly speaking, MSBuild guidelines indicate that things which begin with "_" are supposed to indicate that the things are not for public consumption. So, we could take the approach of re-defining the Publish tasks to enable this scenario (and we could get that to work), but that would involve re-defining targets which are also considered "private" because they start with "_" as well. So either way, we're doing something we shouldn't; taking this approach will definitely be the easiest route.