What are digital signatures?

In Word, Excel and PowerPoint 2010, a digital signature can be added by going to the Office Backstage View: 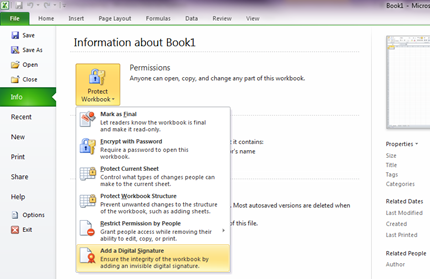 A signature line or signature stamp can be added in Word, Excel, and InfoPath by going to the Insert Tab:

A signature stamp (more commonly used in Eastern Asia) looks like this:

How do signatures work in Office?

Office 2007, and later versions, use an open signing standard called XML-DSig that replaces the less advanced binary signatures from Office 2003 and earlier versions. XML-DSig represents a signature in a mostly human-readable XML format. For more information on XML-DSig, see https://www.w3.org/Signature.

Office 2010 digital signatures are able to use advanced algorithms (like the elliptic curve public key algorithm) supported by Windows Vista and later. All supported operating systems also allow the use of more robust hashing algorithms, like SHA-512.

The most immediate problem with digital signatures is that the certificate you use will expire – usually in as little as one year. After the certificate has expired, no one should trust the signature. If you want to be able to trust a signature over a longer period, then you must keep copies of the information needed to validate the certificate. You might also need to worry about the cryptography becoming obsolete.

Fortunately, a solution to these problems is available in an extension to the XML-DSig standard called XAdES.

XAdES (XML Advanced Electronic Signatures) is a set of tiered extensions to XML-DSig, the levels of which build upon the previous to provide more and more reliable digital signatures.

By implementing XAdES, Office complies with the European Union Advanced Electronic Signature Criteria in Directive 1999/93/EC as well as a new Brazilian government directive which defines XAdES as the accepted standard for digital signing in Brazil.

Office 2010 can create different levels of XAdES signatures on top of XML-DSig signatures: 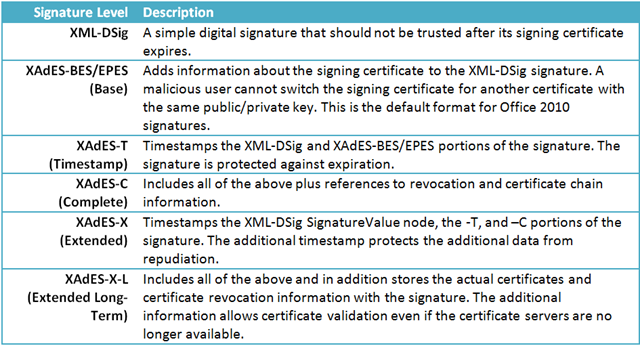 The Office 2010 Beta only creates up to and including XAdES-T signatures, but Office 2010 RTM will be able to create all the signatures in the above table.

Time stamping digital signatures (XAdES-T signatures) is an important scenario we focused on in Office 2010. In order to create a time stamped signature, you’ll need to:

The MinXAdESLevel setting allows you to ensure that created signatures meet your required XAdES level. A XAdES-T or higher signature will fail if the timestamp server isn’t available, and a XAdES-C or higher signature will fail if revocation information isn’t available. Having a minimum setting allows scenarios where you could attempt a XAdES-X-L signature, but fall back to XAdES-EPES if the timestamp server is down.

To create XAdES-T signatures and above you will need to provide Office with a time stamp server to query for time stamps:

If you want to create XAdES signatures, we recommend using one of three levels:

Sam wants to create XAdES-X-L signatures. If this is not possible, he is willing to accept any signature that is at least a XAdES-T signature. He sets:

As mentioned previously, Office 2010 Beta is only able to create up to XAdES-T signatures because we added the rest of the XAdES work in after the Beta. The XAdESLevel registry setting we explained above still applies, but the maximum level is 2 (XAdES-T). TheMinXAdESLevel setting isn’t present, but you can only create two types of XAdES signatures – with and without a timestamp, which is controlled by the TimestampRequired setting (which isn’t present in the RTM version).

To create a XAdES-T signature, you will additionally need to set TimestampRequired (below) and TSALocation (see explanation above):

The XAdES feature is one of many security enhancements we have made to Office 2010. Thanks for reading, and we look forward to hearing your feedback!