Software updates in Configuration Manager provides a set of tools and resources that can help manage the complex task of tracking and applying software updates to computers in the enterprise. An effective software update management process is necessary to maintain operational efficiency, overcome security issues, and maintain the stability of the network infrastructure. Effective Software Update Management requires constant attention.

Automated deployment rules can be configured to:

If configured to run on a schedule, the recurrence options are:

“Patch Tuesday” is a well-known term in the industry that refers to the second Tuesday of every month (USA time) when Microsoft releases patches. Patches are usually released at 10am Los Angeles time. (PDT).

Given the release time, time zones with a time zone offset of +7 will find it impossible to use the recurrence pattern to schedule based on patch Tuesday and other time zones will struggle to find the most appropriate time in the day to schedule the update.

Based on daylight savings times in 2016, Table 1 demonstrates the variation in time across the year between time in Los Angeles, USA and Brisbane or Sydney in Australia.

The potential solutions for this are:

I've written a sample script that provides this functionality. The script is designed to run daily and checks the local time on the server against PDT and if the day is Patch Tuesday PDT time it will execute the following steps:

An example of the generated email message is displayed in Figure 2. The schedule section links to the “Software Updates Deployment – Deployment States” report for the collection listed and the relevant software update deployment. 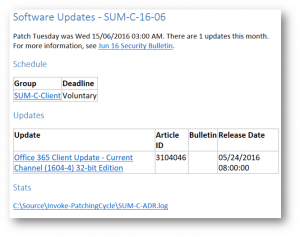 For more information about the script and how to set it up, head over to TechNet Gallery.