In large Operations Manager environments, I/O peaks when writing in disks can affect the management servers (including the RMS, if it's SCOM 2007) and/or the agents that are managing many workflows.

The reasons behind high I/O peaks include:

• Agent or MS acting as proxy for a considerable number of devices,

• ESE store version, depending on the Windows Version,

The case solved in which we based this post, was in a SCOM 2007 environment, but this can also be applied for 2012 versions.

In order to get a solution for this, here are the changes on the registry that should be made:

1 - We recommend changing the following registry keys values so that agents\ Management Server can better manage the load:

The default size of the version store depends on the Operations Manager role and is defined as the number of 16-kilobyte pages to allocate in memory. The default values are as follows:

2 -  All management servers, that host a large amount of agentless objects may result in the MS running a large number of workflows: (network/URL/Linux/3rd party/VEEAM). This is an ESE DB setting which controls how often ESE writes to disk.  A larger value will decrease disk IO caused by the SCOM healthservice but increase ESE recovery time in the case of a healthservice crash: 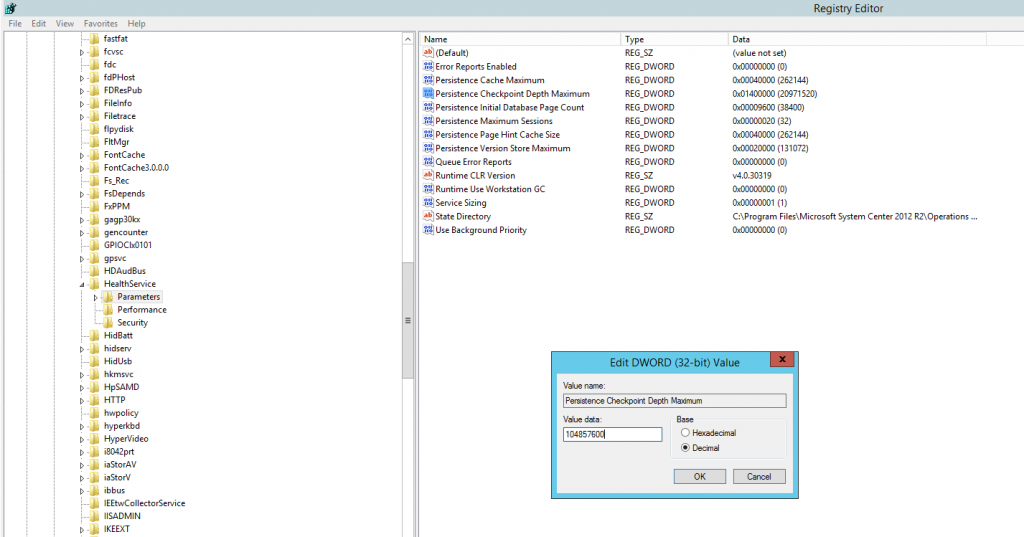 3 – All management servers in a large management group:  This sets the maximum size of healthservice internal state queue.  It should be equal or larger than the number of monitor based workflows running in a healthservice.  Too small of a value, or too many workflows will cause state change loss. The following key should be created:

For further information regarding improving the performance of SCOM 2007 and 2012, please check the following blog post from our colleague Matt Goedtel: https://blogs.technet.microsoft.com/mgoedtel/2010/08/24/performance-optimizations-for-operations-manager-2007-r2-and-2012/

Hope this is helpful!