Extending Your Brand to the Desktop with Windows 7

What is Windows 7 doing at a web conference like MIX09? Last week I went along to the above titled session, in which Yochay Kiriaty, an irrepressible evangelist on my team, presented the case for a desktop application in an increasingly web-orientated world.

He talked about how local desktop applications remain just as relevant as ever in the world of the web. For example, even though Twitter is often portrayed as the doyen of the Web 2.0 world, there are over 560 applications that use the Twitter API, spreading across client and mobile devices. Similarly, many other web properties such as Netflix, New York Times, eBay and Windows Live, have great desktop experiences that add value to the core experience. With a market of one billion addressable devices, it would be foolish to ignore the role Windows-based applications can play.

Yochay demonstrated a number of potential entry points in Windows 7 for a website that might want to supplement their browser-based offering with a “sticky” branded desktop experience: 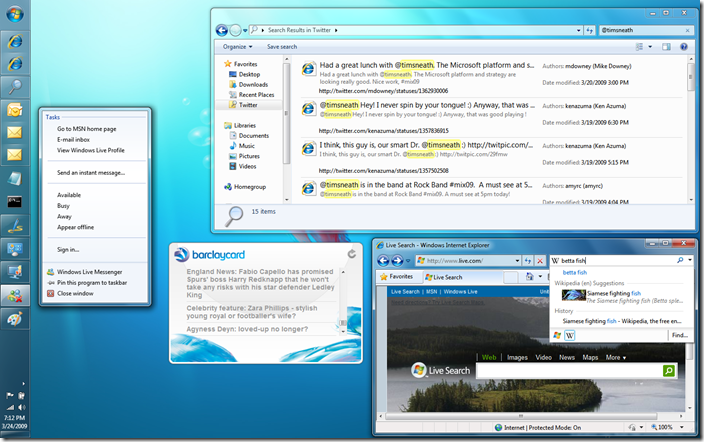 It’s clear that there’s increasing convergence between the web and the desktop. Beyond the search features above, the inclusion of multi-touch and gesture support in Silverlight 3 demonstrates how the lines are blurring. It’s going to get easier and easier to build applications that run great on the web but do even more when they take advantage of the full power of Windows. It’s an exciting time to be a Windows developer!

(Note: I originally posted this session’s notes at https://visitmix.com/Opinions; I’ve edited them a little and reposted them here for consistency with the other posts below.)