What the heck is going on with this swine flu thing? I was in the elevator at The Roosevelt last night and these guys are saying, “Don’t eat the carnitas (pork) no matter what.” Um, I don’t think you can get this new swine flu from eating pig, but apparently you get from any other normal means of transmitting any other flu strain – hand shaking, kissing, swapping spoons, etc. I’m buying stock in Purell. Well, while there’s quite a bit of information available about this swine flu some Microsoft Virtual Earth fans decided to map the outbreak, so here are a couple applications using Virtual Earth to visualize the outbreak.

Live Search Maps has a collection highlighting reported cases (both confirmed and unconfirmed) and the routes they traveled between home and vacation / business where they apparently contracted the strain. The collection also has information about each point on the map. The official description is, “2009 Swine Flu H1N1 Outbreak and Migration Map - Map of 2009 Swine Flu H1N1 outbreaks and migration paths reported from news and government agencies. The map lists reported dates and paths of infected persons traveling.”

UMapper built out a version of the swine flu data which overlays raster tiles on Virtual Earth and renders it through a Flash interface. The heat map (which gets updated a few times through the day) shows the impact of the outbreak around the world where the hot areas are white at the center cooling off to orange and purple. You can how the flu has really taken off in North America as would be expected since the claim is that it originated in Mexico. Using the heat map, one could argue that it may have started in the US given the intensity in the respective areas. Perhaps the pigs were eating peanuts out of Georgia? Hmm. The UMapper map is embeddable so you can actually embed the application right in your own web page. I’ve embedded the mashup below, so be patient as it loads….

Bo Zhao, a University of Florida student, build out a sweet UMapper Swine Flu mashup on Geoinformatics.cn in Flash that includes the heat map mentioned previously, but also includes pins indicating flu outbreaks and sweet animations if there are multiple pins in a single location. You can switch map styles and toggle the pins on the map. 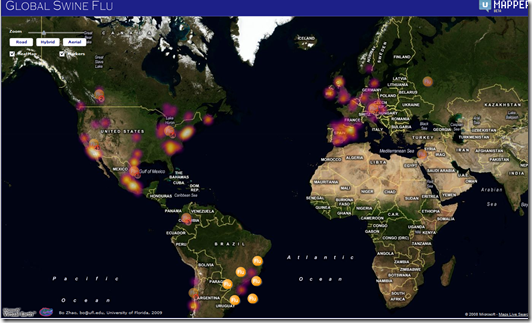 So, pretty much the same rules apply to any other flu…wash your hands, use Purell and don’t let anyone sneeze, breathe or spit on you…if you can help it. So, in the famous words of Jules Winnfield, “I just don’t dig on swine.”