What Have We Been Up to?

Our team has been busy working on several things in parallel. I wanted to blog a little bit about the stuff we have been working on so our VSX developer community is in the know :)

1) VS 2008 SP1. You all have see the beta go out, and hopefully have already downloaded and tried it. As we have announced earlier, we have made some pretty significant changes in the VS Shell redistributable packages, reducing the size of the overall redistributable package. Since the Beta has been out for a while, you can expect the RTM version of SP1 to be released soon (soon is subject to interpretation).

2) VS 2008 SDK 1.1. We have gotten in the good habit of releasing a matching SDK for each public release of Visual Studio. Earlier on when SP1 Beta was released, we released the matching VS 2008 SDK 1.1 Beta. Well, obviously, we are going to have a RTM release of VS 2008 SDK 1.1 to match SP1 RTM! The 1.1 release is mostly bug fixes, but we have also added a few enhancements.

4) Future VS version. Yes, we are working on more than just the SDK. Our team is also working on some features in the next version of Visual Studio. Unfortunately, it's too early to disclose this to the community right now, but we will let you know once we are ready to share them more broadly.

5) VSX Developer Conference. Our team has also been busy organizing the upcoming developer conference. We are very excited about this upcoming conference as this is the first of its kind. I have also posted about the session details last week. We have a very exciting agenda lined up and we would love to see you all there. If you haven't registered yet, there is still space so you should register right away!

6) TechEd SEA. Good o' Gareth is in Kuala Lumpur this week, giving 3 sessions about VSX at TechEd SEA 2008. If you are there, make sure you say hi to him!

7) VSX Survey . Some of you have *very kindly* took part in the VSX survey that we posted from May to July. We have also been looking at the results, and we have gained some great insights. When we are ready, we will share those results with you.

If you have any thoughts on the things that we are working on, feel free to leave comments below.

Just for fun, here is a picture we took this morning. Mariano (a developer on our team) made some AWESOME Pavé (pronounced Pa-vey) and brought it at our scrum meeting this morning. It's a Brazilian dessert, and it's *very* good. Mariano is the one cutting it. You can see Aaron, Don and Carl in the background. 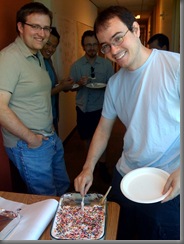