What’s up with us playing Kanban games in the garage?

A couple of months ago a colleague, Ewald Hofman, delivered a phenomenal Kanban training at Microsoft Vancouver, using the getKanban. game. It triggered numerous discussions during and long after the event, and influenced posts such as planning … it’s all about people and the secret sauce to managing our backlog and TODO lists‎. The game offered an opportunity for teams to experiment with the concepts of Kanban and engage in a fun way.

Derek and I were hooked! We organised copies of the game for our Garage (a place for engineers to come together and experiment), started working through the game, and preparing to host games for our teams and the community.

Our first game after Ewald’s event

We agreed to these rules:

Here’s a snapshot at the start of our game day 10: 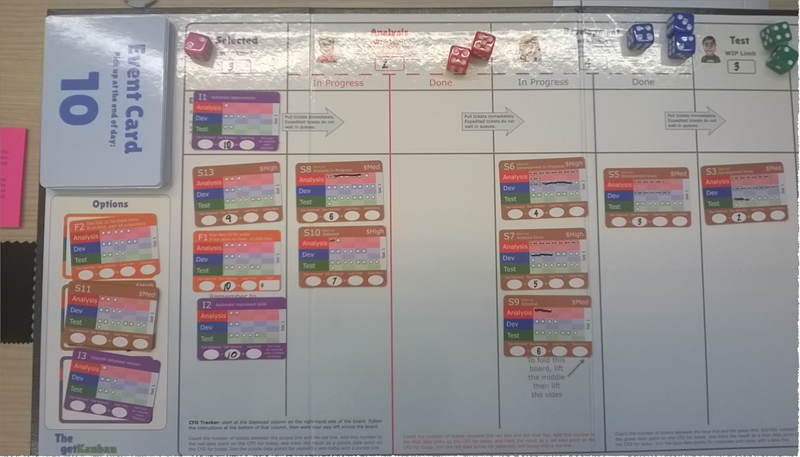 We encountered a few interesting events, which we’ll discuss later, and quickly realised that our first rule had a negative, and the second a positive side-effect. The third rule simplified the game by promoting consistency. It’s up to you to organise the board before, during, or after each day, just keep it consistent.

Our cumulative flow diagram shows the flow of work over time. It highlights that we started (1) with far more work in progress (WIP), than we ended (2) with, one of the side-effects of not adjusting the work in progress limit.

And we achieved the following financial summary, which landed us in 29th position on Edwards list of game results: 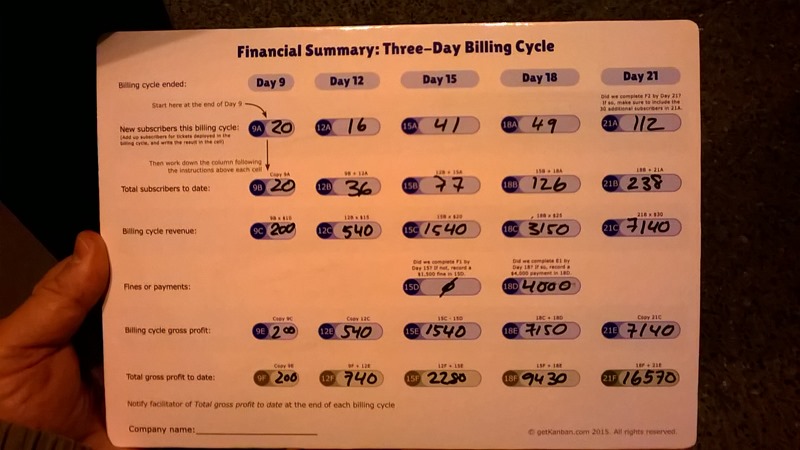 Here’s a few topics we discussed during the game. What are your thoughts?

Is it important to observe and adjust the work in progress (WIP) limits?

During the game we observed bottlenecks and resource wastage in our Analysis column, which resulted in the development and test resources sitting idle. We were unable to sustain the flow of work, as we intentionally did not adjust any of the WIP limits. It became painfully obvious to us during the game that we should be adjusting our WIP limits to sustain the overall flow of work. So, YES, it’s important to observe and adjust the WIP limits.

Should we care about blocked items? 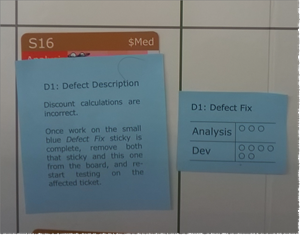 During the game one of the work items was blocked and we had a vibrant discussion whether to unblock or simply ignore the blocked item. s the blockage occurred late in the game, affecting a medium value and ageing item, we agreed that to focus on the other work items and ignore the blockage. Had we not agreed not to adjust WIP limits, we would have increased the associated WIP limit to maintain the overall flow. Again this speaks in favour of monitoring and adjusting your WIP limits. In our case, we were unable to adjust the WIP limit, creating another bottleneck in the Test column.

So, YES, we should care about locked items. How we deal with the item depends on it’s value, our ability to resolve the blocker, and whether there are dependencies.

Would you take a risk when you assign resources? 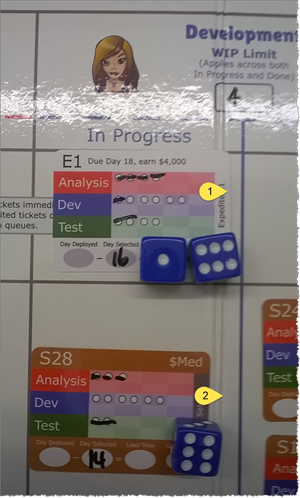 We had the scenario as shown above.

We opted for option (a), prioritising the expedite lane. It also felt like the safest route, allowing overflow to be assigned to S28.

What’s the value of the Lead Time Distribution and the Run charts?

We maintained both charts for only half the game. We felt that effort to maintain the charts was higher than the value we got from the visualizations.

BUT, with more players, or in real-life (not in a game) and with more historical data, there’s a definite value in both charts.

If you’re interested to enjoy a game of Kanban, please contact us and we’ll make a plan!