It’s been a while since I have been able to post about the goings on with Azure Mobile Apps and other related Azure mobile goodies. (I’ve also been working on docs for the new Azure Functions offering, which is now in preview, so there’s that.) Anyway, here’s some of what’s exciting on Azure, at least to mobile developers:

Mobile Services will get migrated to App Service

Although the .NET client has been working for Universal Windows Platform (UWP) app on Windows 10 for a while now, it hasn’t been officially supported and there wasn’t a UWP quickstart project in the portal. This deficiency has been remedied as the Windows (C#) button in the quickstart now downloads a UWP app project, which is responsive for both desktop and phone devices. The Windows getting started tutorial is now updated to use this new UWP quickstart project. I have also added a UWP version to the quickstart completed project for Windows. For those unfamiliar, this repo is essentially the quickstart project that you get after completing the four main Mobile Apps tutorials (create, auth, push, and offline). The cool thing is that this project also includes some real-world extras (token expiration checks, template-based push, and client-added push tags), which you can read about in the project readme or in the Azure Samples Gallery. 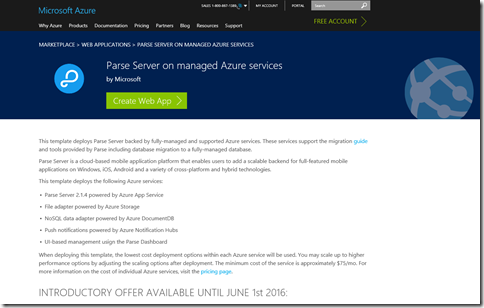 In a new offering that fully supports Parse customer needs when migrating to Azure, there is now a Parse Server implementation that uses only Azure services via a template in the Azure Marketplace. The best parts to me are: 1) you no longer need to provide your own Mongo DB (you instead get to use Azure DocumentDB), 2) integrattion with Azure Notification Hubs for push notifications and with Azure Storage for blobs, and 3) you even get a Parse dashboard in the Azure portal. Bam! For details, see the post Announcing the publication of Parse Server with Azure Managed Services. Don’t miss the free DocumentDB limited introductory offer.

In an homage to Josh Twist’s classic blog series on Mobile Services, Mobile Apps expert Adrian Hall has embarked on a very interesting and informative series on Mobile Apps: 30 Days of Zumo.v2. Rather than rehashing the existing docs, this series swerves off-road and delves into areas currently not too well documented. Very worth a read, and remember to check there for answers to your Mobile Apps questions.

That’s it for this installment, cheers!