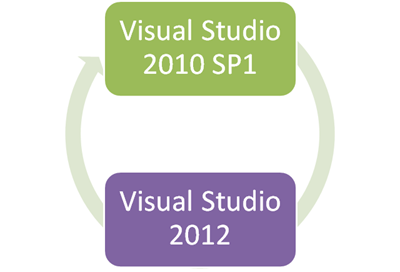 Now that Visual Studio 2012 is pretty well baked I thought it would be good to start revisiting some of my favorite features again and introduce new ones.  Since project round-tripping is one of my most favorite features I thought we would start with it.

In all prior incarnations of Visual Studio if you had an older version, VS2008 for example, and opened up the project in a newer version, VS2010 in this case, you had the option to convert the project.  If you did the conversion it was a one-way trip.  You couldn’t open the project again in VS2008 if you tried to go back.  This has been the source of a lot of pain and suffering for developers who have to work with multiple versions of Visual Studio for a long, long time.  We want the cool features of the latest IDE but still want others on our team to be able to open the solution in the older version of Visual Studio when they get the files from source control.

Putting it to the Test

Here are the steps you can take to test this for yourself:

Here is an edited list of the ones you are most likely to use:

For a more detailed explanation of why this is the case and how the decision making process was done by the VS team make sure to read Richa Prasad’s most excellent blog post here:

Richa does a great job of explaining the overall decisions around this feature as well as showing what happens (and what you can expect to see) in those scenarios where it isn’t as clean.

For example, here is what you would see when trying to import a setup project that is no longer supported: 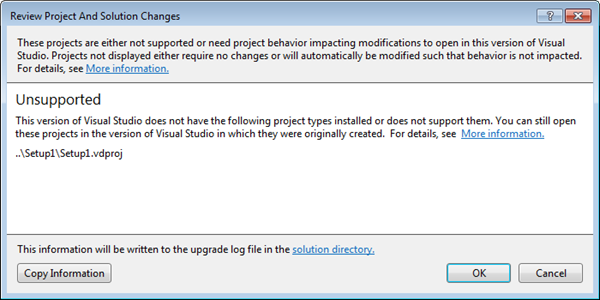 And here is the resulting migration report generated by Visual Studio 2012:

And there you have it!  Give project round-tripping a shot yourself and see if you think it’s great, too!