Build a CI/CD pipeline for chatbots with ARM templates

This article presents a DevOps approach to setting up a continuous integration and continuous deployment (CI/CD) pipeline that deploys a chatbot app and its infrastructure as code.

DevOps is a common development strategy for building custom applications like bots. Azure Pipelines uses modern CI/CD processes to manage software builds, deployments, testing, and monitoring. Azure Pipelines can help you accelerate your software delivery and focus on your code, rather than the supporting infrastructure and operations.

Infrastructure as code uses Azure Resource Manager templates (ARM templates) or open-source alternatives to define and deploy an app's underlying infrastructure. You can colocate the software and infrastructure code in the same source control repository, and deploy both through your pipelines. 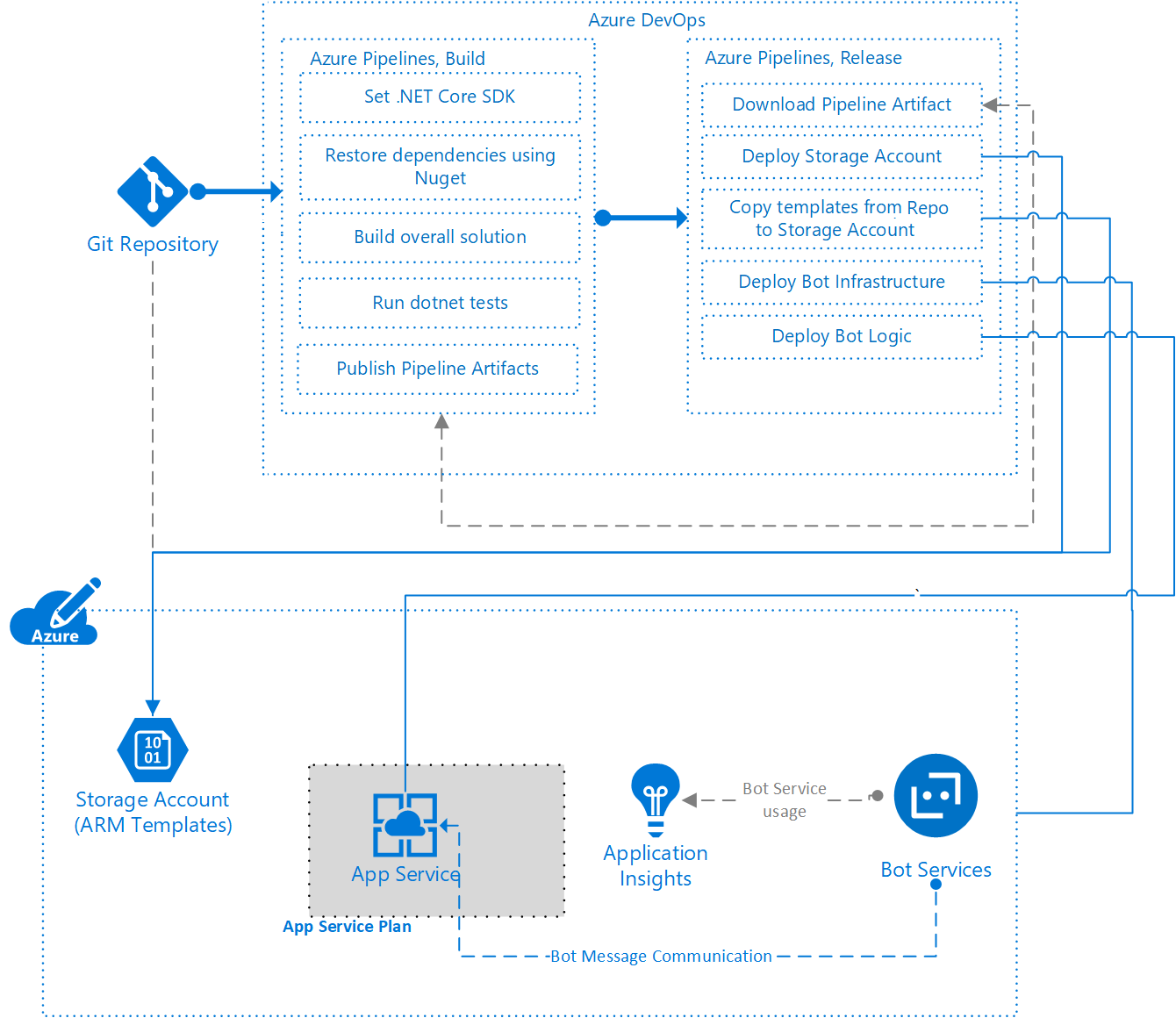 The example scenario in GitHub provides the instructions to create the bot application, infrastructure, and the pipeline code.

In this example, the generated ARM templates deploy the following resources:

If you want your chatbot to use Azure Application Insights or Cognitive Services, such as LUIS and QnA Maker, be sure to add them in the template as well. In such a case, you might want to consider using multiple linked ARM templates to deploy the solution. Typically it will consist of creating Capability templates, similar to units or modules that implement specific pieces of functionality. An end-to-end solution or orchestrator template brings those underlying capabilities together. Some of benefits of following this approach are listed below: 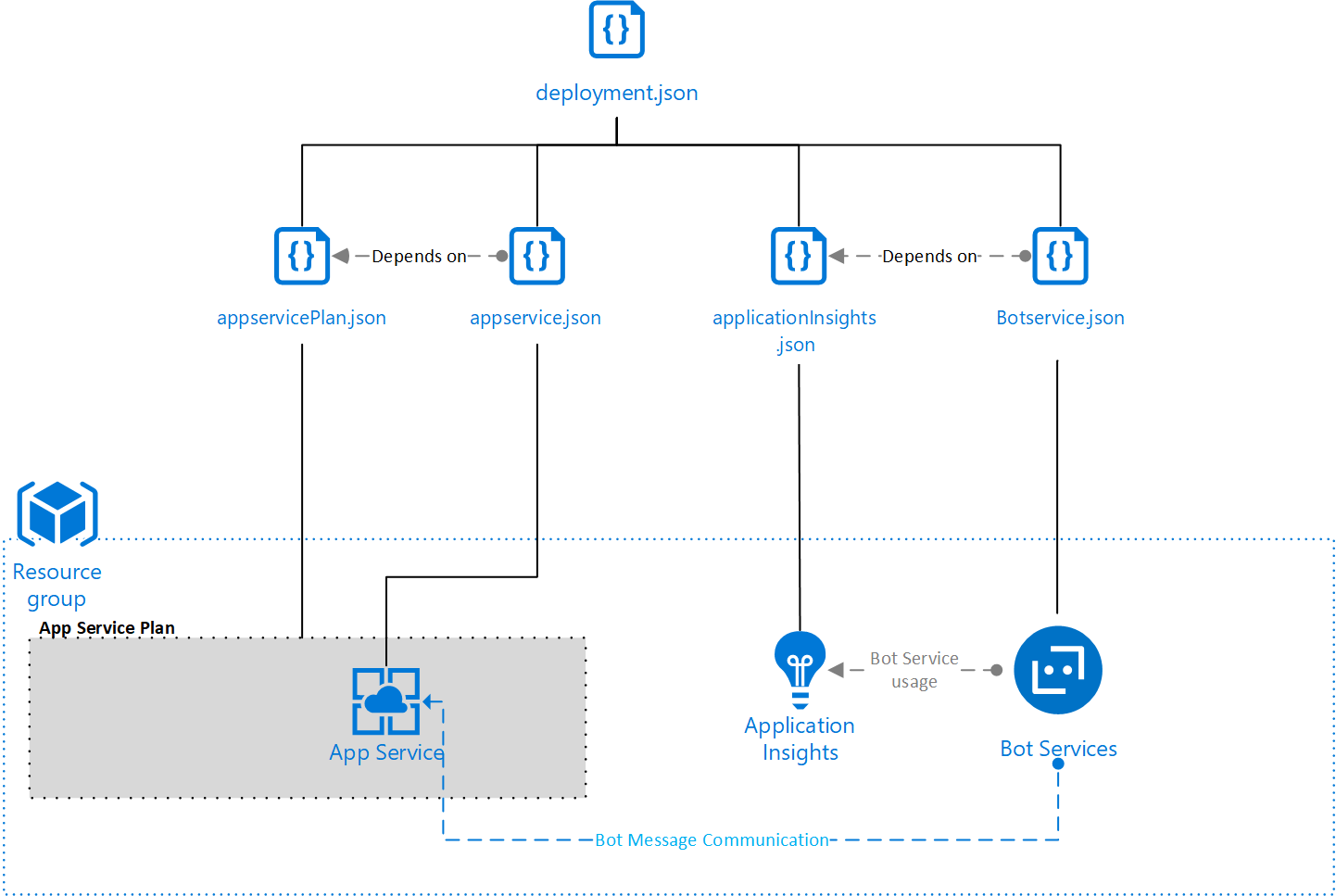 The example goes through the process of installing the Bot Framework samples, specifically the Echo Bot template, to generate a simple C# chatbot that's designed to work in the Microsoft Teams channel.

To develop a new bot, create a C# Bot Framework project in Visual Studio. You can use the Echo Bot template, or start an empty project. For a comprehensive tutorial on creating a Bot Framework project, see Create a bot with the Bot Framework SDK for .NET. For information on configuring a bot to run on multiple channels, see Manage channels in Bot Service. Adding a bot in Microsoft Teams requires a few extra steps and considerations. For details, see Bots in Microsoft Teams.

In general, a chatbot is a Web Api that implements logic in code to receive, process, and respond to specific messages. It could be an ASP.NET Core application like in this example, and as such it is always recommended to plan for unit testing the code against an expected outcome. As mentioned it just like any other Web Api project, so unit testing chatbots use the same principles and approaches as testing other apps. For more information about unit testing, see Unit testing in .NET and Unit testing best practices.

You can add a unit test project to a chatbot solution in Visual Studio, and choose between MSTest or XUnit for the project. For a live view of the unit tests, configure Live Unit Testing.

Azure Pipelines is a DevOps service, where it is possible to implement and execute the desired stages, such as build, deployment, and so on, which constitute the pipeline for your apps.

You define the triggers, stages, and tasks for pipelines in a YAML build definition file. This file can be versioned in source control, typically seated along side or under the specific project folder structure. In some cases, an organization might prefer to store them from a separated repository, or they could also opt for using the Classic visual interface to create a build pipeline. To use this interface, select Use the classic editor on the pipeline creation page.

If you enable continuous integration in the triggers section of your build pipeline, new commits to the repository automatically kick off the build. YAML build pipelines have a CI trigger on all branches by default. This example will be listening to changes in the main branch under a specific folder. Once you check in your code, the build pipeline could run tests to validate the code, and builds the appropriate parts of the software. The number and types of tests and tasks you run depend on your wider build and release strategy.

A multi-stage YAML pipeline executes all the defined stages such as build and deploy. While another option is to use an Azure Pipelines release pipeline to automate your deployment process. In both cases, the result is the same since it enables continuous deployment.

In the deploy stage or release pipeline, you define tasks to deploy your app to the underlying infrastructure. You can define many variables for the overall pipeline, so you don't have to input them for every task.

The deployment depends on the build execution to get the output artifact that contains a drop. In this example, it is a zip file with the chatbot compressed into it.

Organizations embracing GitOps could automate the deployment of the underlying infrastructure as well. Typically, a different pipeline is created for that purpose, and it is initially executed on day-zero or as part of future revisions, while modifying the infrastructure, in case it needs to be patched or evolve. There are no impediments for these ARM templates to reside in a completely separated repository, which offers a better separation of concerns for configuration management assets. However, organizations seeking to reduce the number of repositories, or to give more ownership over infrastructure to the dev team, could opt to store them under the same Git repo. Note that during the deployment of linked ARM templates, they need to be accessible from a public endpoint, such as a Git repo or an Azure Blob Storage account.

An Azure App Service Plan is the underlying server farm used to deploy an Azure App Service instance. In this example, the ARM templates are being generated using the EchoBot templates. Later you could adapt them to your specific case scenario by modifying the tier, compute, platform, or scale, or break them down into several linked ARM templates, as presented above.

The Azure Bot Service provides an endpoint for the bot to communicate through the chosen channels. The Bot Service also provides a mechanism to associate the bot to a pricing tier, based upon the expected requests and throughput.

To deploy to Azure, the bot needs an Application ID and password, and the ability to register channels to run in. All the instructions are provided as part of this example. For more information, see App registration.

You can build and deploy the example scenario from GitHub.

Here are some ways to further enhance the scenario: