This scenario is commonly deployed in industries such as banking and insurance, where customers are conscious of platform-level security in addition to application level security. To demonstrate these concepts, we'll use an application that allows users to submit expense reports.

Consider this scenario for the following use cases: 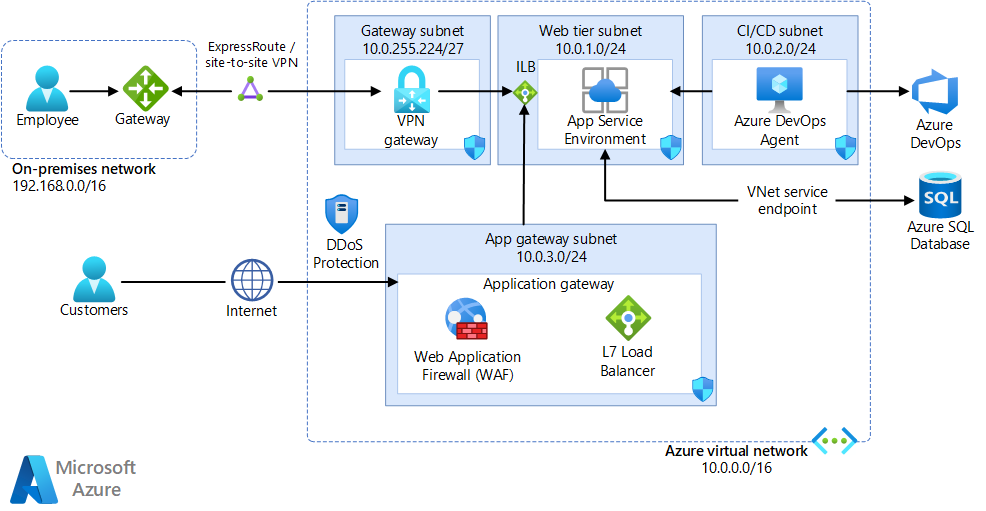 Other options for the data tier include:

There are certain considerations when dealing with certificates on ILB App Service Environment. You need to generate a certificate that is chained up to a trusted root without requiring a Certificate Signing Request generated by the server where the cert will eventually be stored. With Internet Information Services (IIS), for example, the first step is to generate a CSR from your IIS server and then send it to the SSL certificate-issuing authority.

You can't issue a CSR from the Internal Load Balancer (ILB) of an App Service Environment. The way to handle this limitation is to use the wildcard procedure.

The wildcard procedure allows you to use proof of DNS name ownership instead of a CSR. If you own a DNS namespace, you can put in special DNS TXT record, the wildcard procedure checks that the record is there, and if found, knows that you own the DNS server because you have the right record. Based on that information, it issues a certificate that is signed up to a trusted root, which you can then upload to your ILB. You don't need to do anything with the individual certificate stores on the Web Apps because you have a trusted root SSL certificate at the ILB.

While provisioning the App Service Environment, consider the following limitations when choosing a domain name for the environment. Domain names can't be:

Another point to consider is DNS. In order to allow applications within the App Service Environment to communicate with each other, for instance a web application to talk to an API, you'll need to have DNS configured for your virtual network holding the environment. You can either bring your own DNS or you can use Azure DNS private zones.

To deploy this scenario, follow this step-by-step tutorial demonstrating how to manually deploy each component. Select App Service Environment v3 instead of v2, when following the tutorial. This tutorial also provides a .NET sample application that runs a simple Contoso expense reporting application.

Explore the cost of running this scenario. All of the services are pre-configured in the cost calculator. To see how pricing would change for your particular use case, change the appropriate variables to match your expected traffic.

We've provided three sample cost profiles based on amount of traffic you expect to get: