This article summarizes the process and components the Microsoft Commercial Software Engineering (CSE) team used to build a solution for a banking customer. For the sake of anonymity, the article refers to the customer as Contoso Bank. It's a major international financial services industry (FSI) organization that wanted to modernize one of its financial transaction systems. 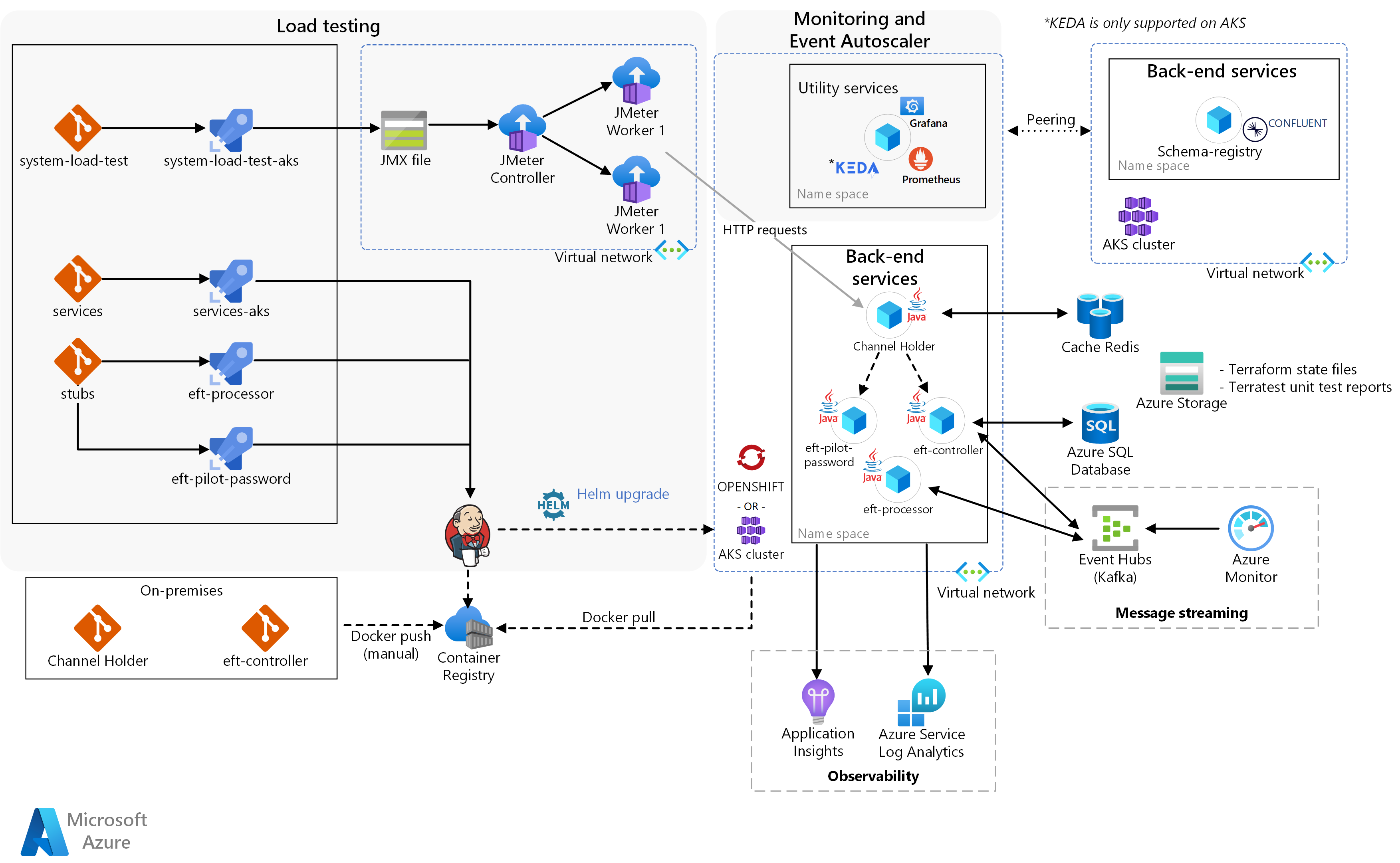 The actual Contoso microservices containers were manually pushed through Docker to the Kubernetes cluster. This cluster was:

The CSE team created the other microservices as stubs to specifically isolate the actual Contoso microservices from other external mainframe services that the solution pushed through Azure Pipelines.

At the core, the backend services provide the necessary logic for an EFT to happen:

In this solution, the team used a Kubernetes/OpenShift HPA mechanism. HPA automatically scales the number of pods based on a selected metric. Doing so provides an efficient scale in and out mechanism for containers. Given the CPU-bound nature of the Channel Holder REST API, the team opted for using HPA with CPU so that the service replicas can grow as new EFTs occur.

This component runs a service called Channel Holder on Azure Red Hat OpenShift. It carries out pod autoscaling tests on this service. The component had to achieve the following capabilities:

First HPA scales the replicas up to a point where it saturates the cluster infrastructure. Then a scale in and out mechanism for the nodes keeps the applications receiving and processing new requests. For that mechanism, the team used Kubernetes node autoscaling, which allowed the cluster to grow even when all nodes were close to their full capacity.

This component focuses on running the Channel Holder service on AKS to allow node autoscaling tests. It had to achieve the following capabilities:

Using the load testing framework, the CSE team generated enough load to trigger both HPA and node autoscaling mechanisms. When the solution triggered the components, it generated infrastructure and application metrics for the team to validate Channel Holder scaling response times and the application behavior under high load.

This component focuses on running Channel Holder, EFT Controller, and EFT Processor services on ARO and AKS. Also, it carries out pod and node autoscaling and performance tests on all services. It had to achieve the following capabilities:

The list below summarizes the technologies that the CSE team used to create this solution:

Contoso Bank is a major international financial services industry (FSI) organization that wanted to modernize one of its financial transaction systems.

Contoso Bank wanted to use simulated and actual applications and existing workloads to monitor the reaction of the solution infrastructure for scalability and performance. The solution had to be compatible with the requirements of the existing payment system.

Contoso Bank wanted to use a set of simulations to:

The proposed solution would use a virtual application to simulate functional scenarios. Its purpose would be to monitor the performance and scalability of the infrastructure. The aim was to determine the impact of failures in the mainframe Electronic Funds Transfer (EFT) system workloads through this set of simulations.

The Contoso team and CSE team defined the following success criteria for this engagement:

Contoso Bank considered the following general points as successful criteria on all components:

The solution provided by the team included cross-cutting concerns and specific implementations to achieve the target deliverables. It also had to adhere to some design constraints based on Contoso Bank's policies.

It's worth noting that because of a feature constraint on Azure Red Hat OpenShift 3.11, Contoso requested the use of Azure Kubernetes Service for testing node autoscaling scenarios.

There were a number of design constraints that the CSE team had to consider:

Cross-cutting concerns of the solution

The CSE team decided to use Apache Kafka as the distributed message streaming platform for microservices. For better scalability, the team thought about using one consumer group per microservice. In that configuration, each microservice instance is a scale unit to split and parallelize events processing.

They used a formula to calculate the estimated ideal number of partitions per topic to support the estimated throughput. For more information about the formula, see How to choose the number of topics or partitions in a Kafka cluster.

To deliver an improved DevOps experience for Contoso, the CSE team used Azure Pipelines on Azure DevOps to manage the application lifecycle. The CI pipeline runs on every pull request, while the CD pipeline runs on every successful merge to the main branch. Each member of the development team was responsible for managing the repositories and pipelines for each service. They also had to enforce code reviews, unit tests and linting (static source code analysis).

The CSE team deployed services concurrently with no interdependency and used Jenkins agents as requested by Contoso Bank.

They incorporated Prometheus as part of the solution to monitor the services and the cluster. Besides generating meaningful data for the solution, Contoso Bank can use Prometheus in the future to enhance the products based on daily usage. A Grafana dashboard displays these metrics.

The CSE team created release branches that generated stable versions for deployment. Merging branches into the main branch only occurs when the team is sure that they're ready to deploy the solution. A rollback strategy, beyond deploying the previous stable version, was out of scope for this engagement. Approval gates exist for each stage. Each gate requests deployment approval.

The solution uses Terraform scripts and Azure Pipelines for all the services. If a disaster occurs, Contoso Bank can re-create the entire environment by using Terraform scripts or by running the release pipeline again. Terraform understands that the environment has changed and recreates it. The solution dynamically provisions and destroys the infrastructure on Azure as needed. Storage accounts are zone-redundant storage (ZRS). A backup strategy was out of scope for this engagement.

At the end of the project, the CSE team shared the following insights:

For more detail about the processes and technologies used to create this solution, see the following articles: