The cloud is changing the way infrastructure is designed, including the design of firewalls, because the network isn't physical or in virtual LANs anymore. Not all features of a physical network are available in a virtual network (VNet). This includes the use of floating IP addresses or broadcast traffic and that influences the implementation of HA architectures. Load balancers for Network Virtual Appliances (NVAs) can/must be implemented in a certain way to achieve a highly available (HA) architecture within a virtual network. This guide presents a structured approach for designing HA firewalls (FWs) in Azure using third-party virtual appliances.

When deploying HA architectures, there are a few options to provide failover:

The problem with the first two options is that failover itself is slow. The FW must instruct the failover, which is essentially a "reconfiguration" of Azure services through a new deployment. Depending on how fast that deployment is completed, the traffic flows will be down for several minutes. Furthermore, it doesn't allow for an active-active configuration where both firewalls are operating at the same time.

The following picture starts with two FWs (FW-1 & FW-2), with an external load balancer and a backend server S1. 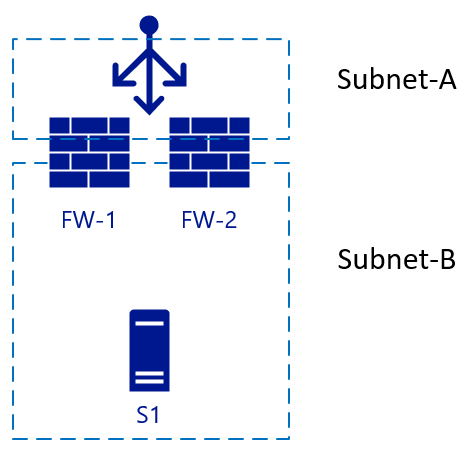 This architecture is a simple setup, used for inbound traffic. A packet hits the load balancer, which chooses the destination FW from its configuration. The chosen firewall then sends the traffic to the backend (web) server. If FW-1 has SNAT enabled, server S1 will see the traffic that comes from the internal IP of FW-1, so it also will send the reply to the packet to FW-1. Failover can happen quickly to FW-2 in this scenario. For outbound traffic, we could add another load balancer on the internal side. When server S1 starts traffic, the same principle will apply. Traffic hits the internal LB (iLB), which chooses a firewall that then translates NAT for external resolution: 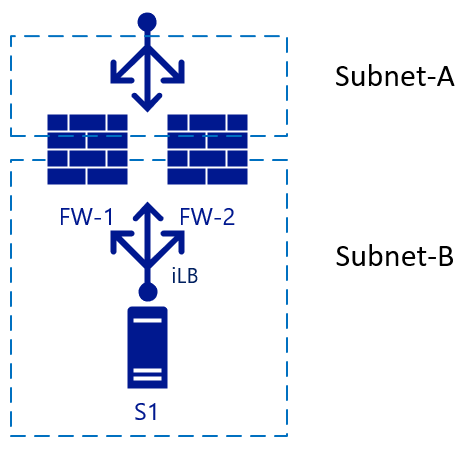 Problems arise when we add another interface to the firewall, and you need to disable NAT translation between internal zones. In this case, see Subnet-B and Subnet-C: 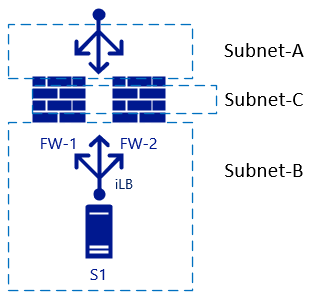 The L3 routing between the internal zones (Subnet-B and Subnet-C) will both be load balanced without NAT. This setup becomes clearer looking at the traffic flows including the load-balancers in a different view. The diagram below shows the view where the internal Load Balancers [iLB] are linked to a specific NIC on the FWs: 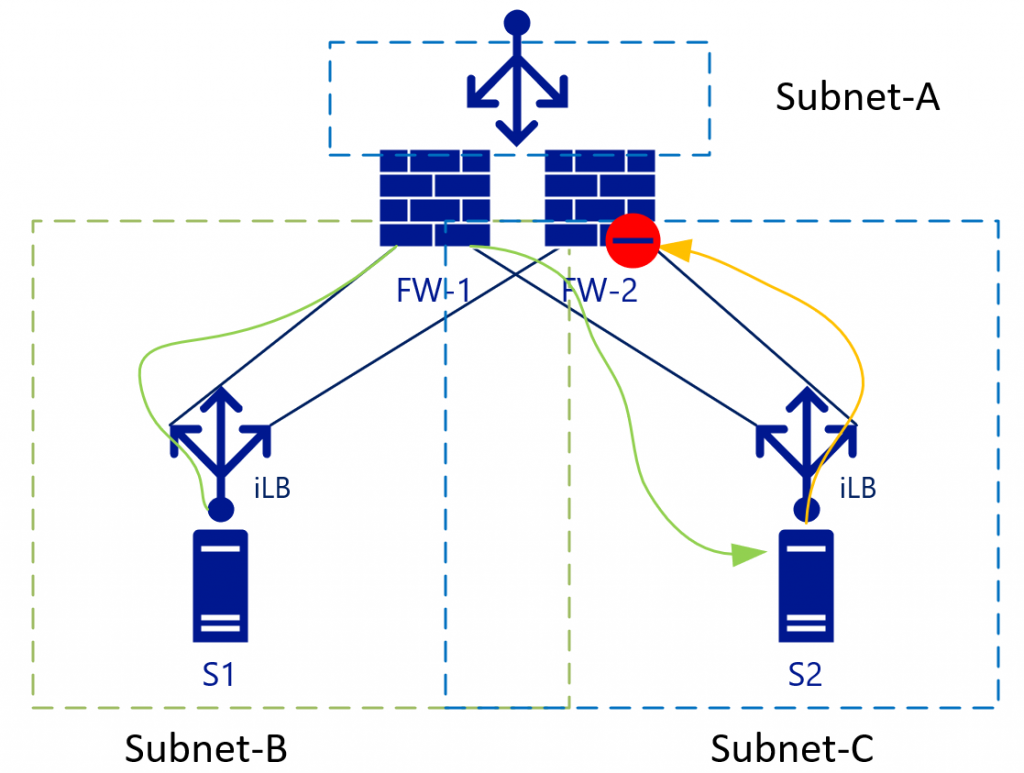 With L3 traffic (without NAT), S2 will see the S1 IP address as the source address. S2 will then send the return traffic for subnet B (to which S1-IP belongs) to the iLB in Subnet-C. As iLB in Subnet-B and iLB in Subnet-C don't synchronize their session states, depending on the load-balancing algorithm traffic could end-up on FW-2. FW-2 by default doesn't know anything about the initial (green) packet, so it will drop the connection.

The best way to deal with this problem is to eliminate it. In the example above, this solution means eliminating Subnet-C, which bring us to the advantages of Virtualized VNets.

Isolate hosts in a subnet with Network Security Groups

When there are two VMs in a single subnet, you can apply an NSG that isolates traffic between the two. By default, traffic inside a VNet is entirely allowed. Adding a Deny all rule on the NSG, isolates all VMs from each other. 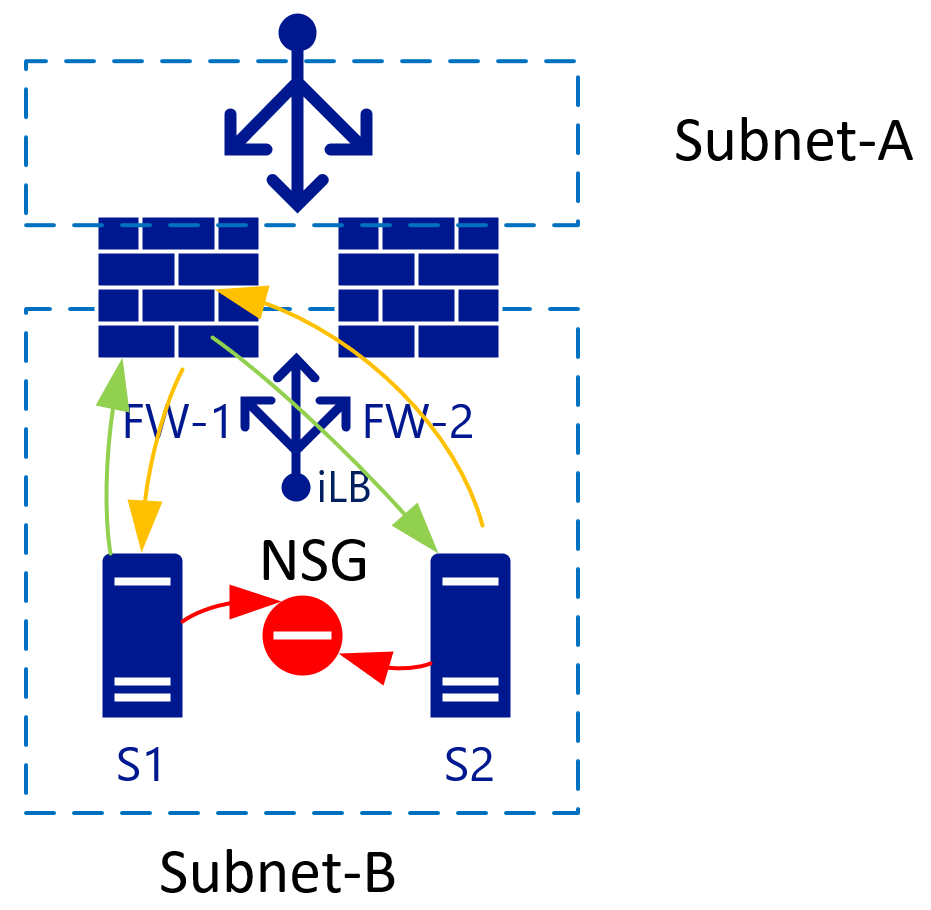 VNet/subnets use a single backend router system from Azure and as such, there's no need to specify a router IP for each subnet. The route destination can be anywhere in the same VNET or even outside. 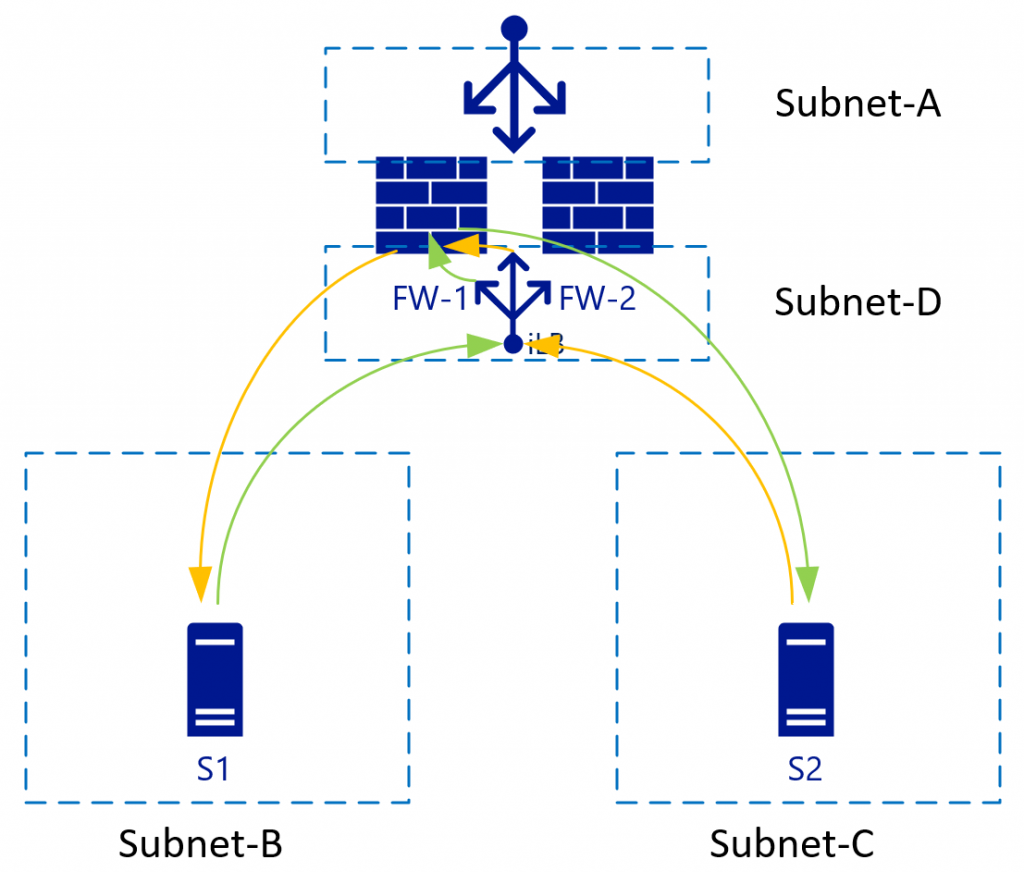 With the virtualized networks, you can control the routes in every subnet. These routes can also point to a single IP in another subnet. In the picture above, that would be the iLB in Subnet-D, which load-balances the two firewalls. As S1 starts traffic (green), it will be load balanced to, for example, FW-1. FW-1 will then connect to S2 (still green). S2 will send the response traffic to the IP of S1 (as NAT is disabled). Because of the route tables, S2 uses the same iLB IP as its gateway. The iLB may match the traffic to the initial session, so it will always point this traffic back to FW-1. FW-1 then sends it to S1, establishing a synchronous traffic flow.

For this setup to work, the FW needs to have a route table (internally) pointing Subnet-B and Subnet-C to its default subnet GW. That subnet GW is the first logically available IP in the subnet range in that VNET.

When you deploy a reverse proxy service, normally it would be behind the FW. You may instead put it in-line with the FW and actually route the traffic through the FW. The advantage of this setup is that the reverse proxy service would see the original IP of the connecting client: 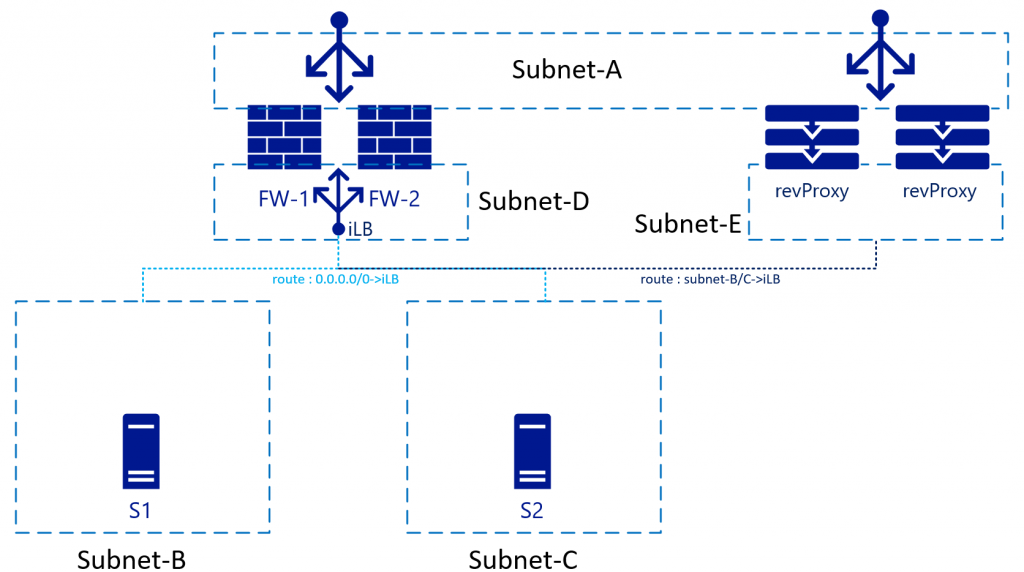 In this scenario, SNAT will be required on the reverse proxy's as well to avoid return traffic to flow through and denied by the FWs to Subnet-A.

Azure provides BGP-enabled/highly-available VPN/ER services through the Azure Virtual Network Gateways. Most architects keep these for backend or non-internet facing connections. This setup means the routing table needs to accommodate the subnets behind these connections, too. While there isn't a large difference to subnet-B/C connectivity, there is in the design of the return traffic, completing the picture:

In this architecture, traffic hitting the FW from, for example Subnet-B to Subnet-X would be sent to the iLB, which in turn sends it to either firewall. The internal route inside the FW will send the traffic back to the Subnet-GW (first available IP in Subnet-D). You don't have to send the traffic straight to the Gateway appliance itself, as another route on Subnet-D will have a route for Subnet-X pointing it to the Virtual Network Gateway. Azure Networking will take care of the actual routing.

Return traffic coming from Subnet-X will be forwarded to the iLB in Subnet-D. The GatewaySubnet will also have a custom route that points Subnet-B-C to the iLB. Subnet-D isn't via the iLB. This will be treated as regular inter-VNET routing.

While not in the drawing, it would make sense for Subnet-B/C/D/Gateway to also include a route for Subnet-A pointing it to the iLB. This arrangement avoids the "regular" VNET routing to bypass the FWs. This as Subnet-A is just another subnet in the VNET according to the Azure networking stack. It won't treat Subnet-A different, although you treat it as DMZ/Internet/etc.

In short, the way you treat firewalls in your on-premises (physical/VLAN-based) networks, with as many interfaces (virtual or physical) is not the same as you would in Azure. If necessary you still can (to some degree), but there are better ways to ensure you can minimize fail-over downtime; have active-active implementations and clean routing tables.

More information on using load balancers as gateways for all traffic can be found on High availability ports overview.