This article discusses a deployment stamping strategy to support scaling up the numbers of connected devices in an internet of things (IoT) solution. The article also describes in detail how to deploy IoT devices and applications between deployment stamps.

The preceding diagram illustrates a deployment stamping strategy for Azure IoT. This solution builds atomic stamps that each consist of:

Stamps should always be designed to support explicit capacities. To determine the correct number of devices to support, consider how much communication traffic to expect from the devices. In this solution, each stamp optimally supports a defined device population from 1,000 to 1,000,000 devices. As the device population grows, added stamp instances accommodate the growth.

Move devices and applications between stamps

Deployment stamps are intended for atomic deployment, but sometimes you need to move device populations between stamps. For example, you might need to:

If the stamp components encompass only device-to-cloud behavior, moving devices between hubs is enough to migrate the devices from one stamp to another. Azure IoT Device Provisioning Service (DPS) provides a way to move devices between IoT Hub instances. To use DPS in stamping strategy, be sure to understand IoT Hub Device Provisioning Service (DPS) terminology and concepts.

DPS uses registration IDs, while IoT Hub uses device IDs. These IDs are often the same value, but can be different. When you query or manage devices with the DPS APIs, be sure to use the registration IDs.

If deployment stamps include web front ends or API applications that communicate through IoT Hub, those components also need to migrate to new hubs to continue communicating with the devices that moved. You can move entire applications and devices between stamps.

This fully self-contained strategy is: 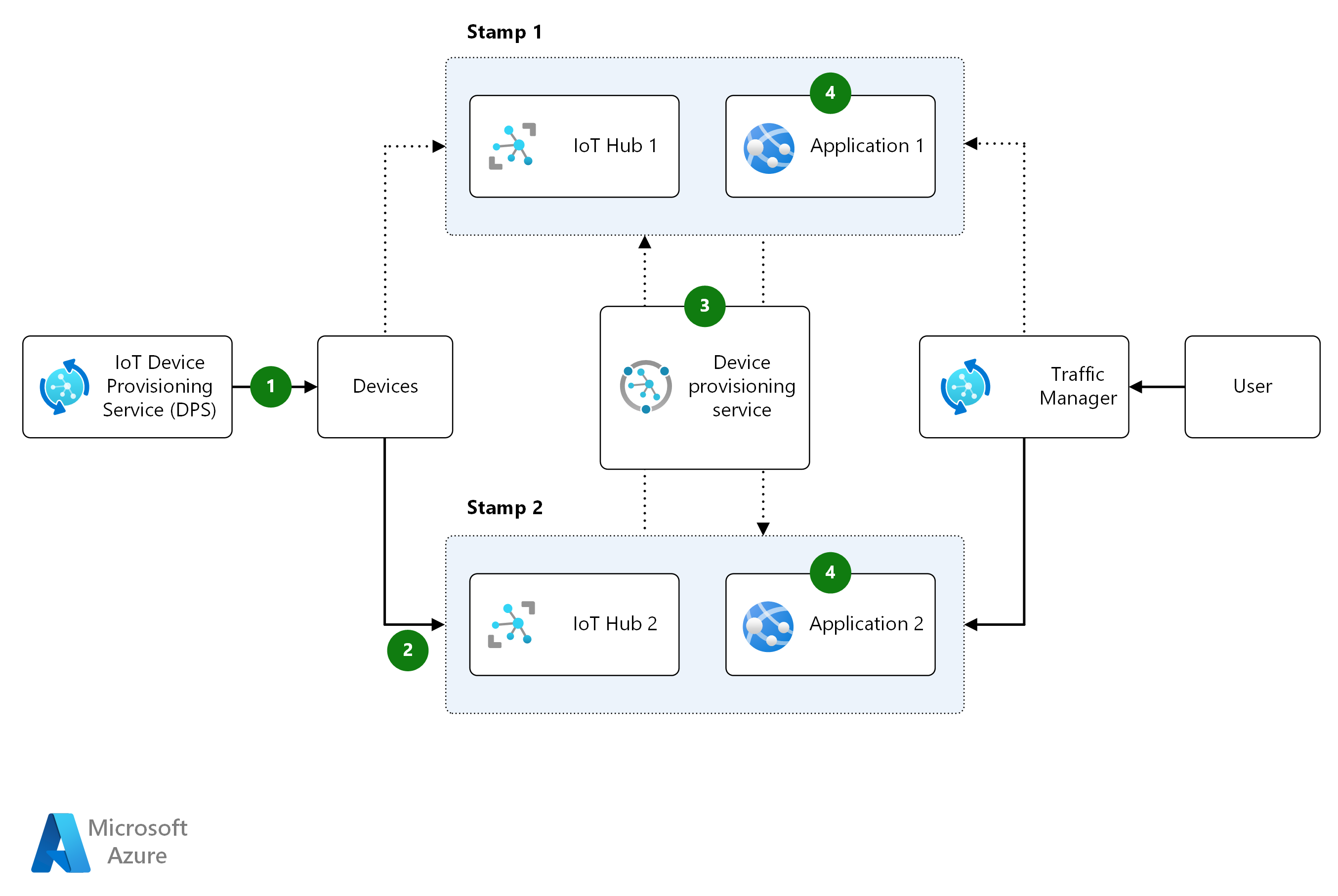 The preceding diagram above shows the process of moving a set of devices from Stamp 1 to Stamp 2:

Move devices between stamps behind a single app gateway

When a single application front-end supports multiple device stamps, the application front-end must dynamically update its device-to-hub mapping to maintain cloud-to-device communication. To support devices moving to different stamps and IoT Hubs, gateways can use a caching mechanism for device-to-hub mapping. Service clients can use a shared lookup routine to dynamically detect and migrate device calls to new IoT Hubs.

In this model, the gateway uses a cache to map devices to IoT Hubs, and defaults to the cached endpoint. If the gateway receives a device not found error, it uses the DPS Service SDK to query individual device enrollment and determine which IoT Hub the device now uses. The gateway then updates the cache with the new mapping.

Here are some considerations for this strategy: