Migrate IBM i series to Azure with Skytap

This example architecture shows how to use the native IBM i backup and recovery services with Microsoft Azure components to quickly migrate IBM i workloads to Skytap on Azure. This native IBM Power9 infrastructure is hosted in an Azure datacenter, minimizing the latency between traditional workloads and those running natively on Azure. You get the reliability and reach of Azure, the flexibility to deploy and scale IBM i logical partitions (LPARs) on demand, plus full backup and recovery services through Azure Storage. 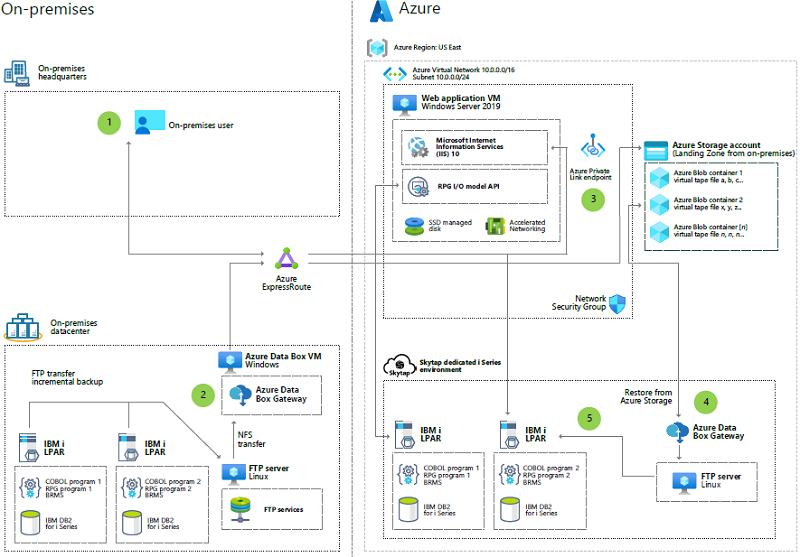 View a larger version of the image

The numbers in the diagram correspond to the following data flow.

The architecture uses these components:

The IBM System i family of midrange computers was first introduced in 1988 as the AS/400. Until now, your choice was to rearchitect iSeries applications before moving them to the cloud or maintain them on-premises or in a co-located facility—both expensive options.

In this example, a web app on Azure gives users a modern interface for the resources running in Skytap on Azure. You can continue to run critical components or systems of record (SOR) on IBM i on-premises. You can also migrate complete IBM i workloads and modernize them using native Azure services, such as advanced analytics and machine learning. In this type of all-cloud scenario, Skytap on Azure helps you optimize costs.

Skytap on Azure provides high performance and efficiency that support demanding workloads up to 44,000 CPWs and 512 GB of RAM, while providing the benefits of cloud scale. With capacity on demand and pay-as-you-go pricing, you save the expense of adding hardware on premises to meet changing demands. You can use smaller LPARs instead of a few large ones and configure resources as needed.

One of the advantages of an Azure–based solution is the ability to scale out. Scaling makes nearly limitless compute capacity available to an application. Azure supports multiple methods to scale out compute power, such as virtual machine scale sets and load balancing across a cluster. Other services scale compute resources dynamically. In addition, applications on Azure can also use Kubernetes clusters as compute services for specified resources.

Azure compute scale-up can be as simple as choosing the right virtual machine for your workload.

Skytap on Azure meets industry cloud security requirements, including System and Organization Controls for Service Organizations 2 (SOC 2) and SOC 3 attestations and compliance with ISO 27001 and PCI DSS 3.2. To learn more about how Skytap secures your workloads, you can get more information in the Skytap Well-Architected Framework Security Pillar.

Running IBM i series workloads in Skytap on Azure helps optimize costs compared to on-premises deployments. The consumption-based usage plans let you deploy LPARs only as needed and scale them on demand to meet the needs of your workloads.

See more pricing information on the Plans + Pricing tab of Skytap on Azure in Azure Marketplace.

To get started running iSeries applications on Azure, check out the Skytap on Azure template in Azure Marketplace. Learn more about the different Migration and Deployment options with the Skytap Well-Architected Framework.

To learn more about Skytap on Azure, contact legacy2azure@microsoft.com or check out the following resources: