Multi-region web app with private connectivity to a database

See Web app private connectivity to Azure SQL Database for information on the base architecture. 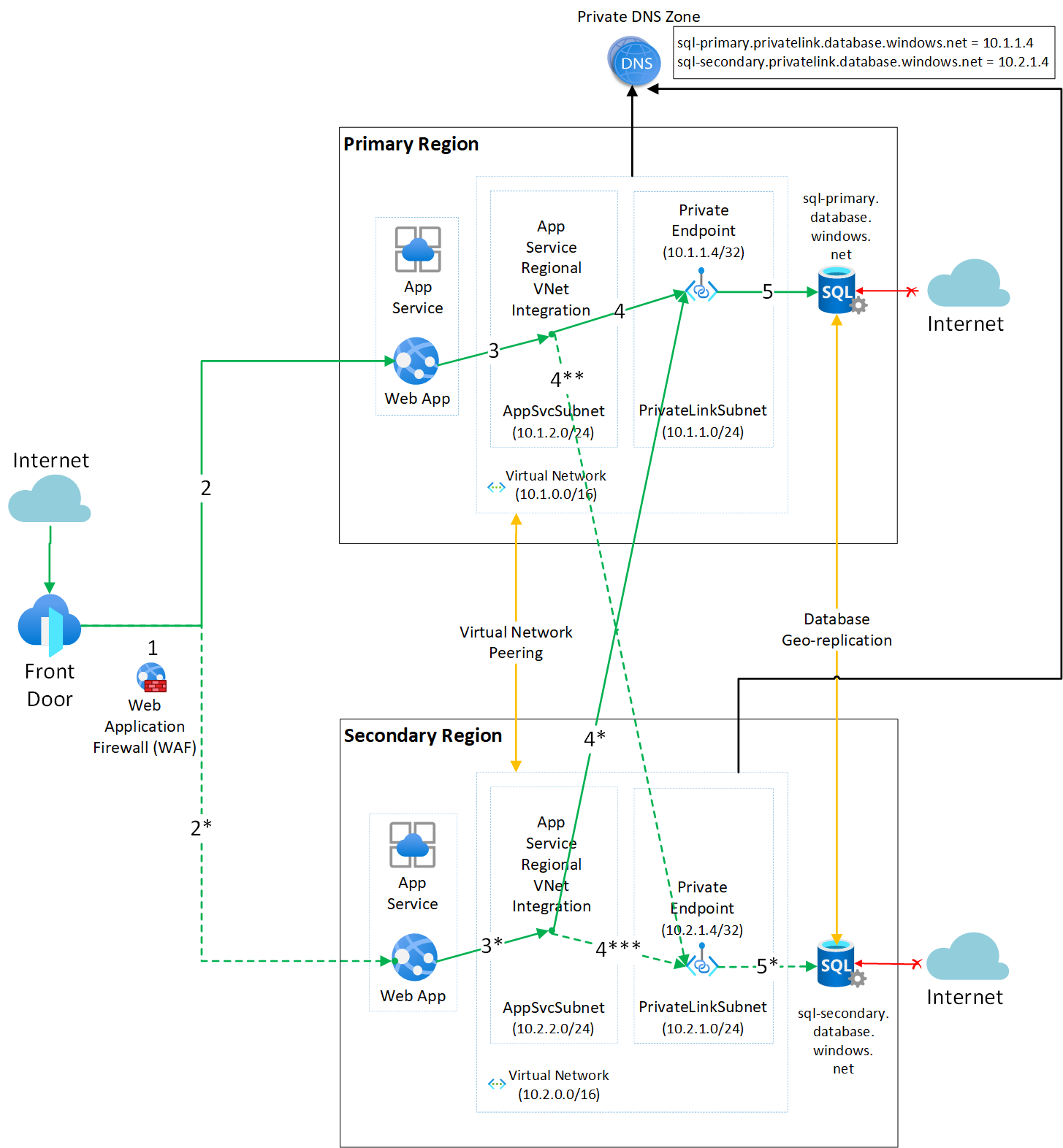 The diagram contains two vertically aligned boxes, one for a primary region and one for a secondary region. Each box contains a web app icon, a box for a virtual network, and a database icon. Outside the boxes on the left, a cloud represents the internet. Arrows point from that cloud through a Front Door and then into the web app in each box. The arrow leading into the secondary region box is dashed. Inside each box, arrows connect the web app, the virtual network, and the database. More arrows cross from the virtual network in each region into the database in the other region. All arrows that end in the secondary database are dashed. Outside each box on the right, a cloud represents the internet. A red arrow that is marked with a letter x points from each cloud to the database in its region. An arrow with points on both ends that is labeled Database Geo-replication connects the two databases. An arrow with points on both ends that is labeled Virtual Network Peering connects the two networks. An icon for a private DNS zone is located at the top of the diagram.

In the general case, the traffic flow and basic configuration look like the single-region version.

For the web app to work with Azure DNS private zones, this architecture uses App Service VNet Integration. When the web app and database run in the same region, the configuration is straightforward. For cross-region private connectivity, the web app can reach the database in the other region by setting up global peering between the virtual networks. When the primary database fails over to the secondary region, the web app in the primary region can still reach the private endpoint of the secondary database in the peered network.

The following cases result when specific databases and web apps are active.

In all scenarios, the web app connects to the currently active database over a fully private connection without requiring a configuration change. In both regions, the web app uses a connection string that includes a Server host name. That host name refers to the DNS name of the SQL failover group. An example is:

Since both regions use the same connection string, you don't need to change that string when a database fails over.

Since this architecture uses a SQL failover group, when the primary database is active:

The secondary web app is active in either of these cases:

When the secondary web app is active:

When the primary database fails over:

To offer high availability, this solution:

With private connectivity to an SQL database and high availability, this solution has applications in many areas. Examples include the financial, healthcare, and defense industries.

In general, the considerations that apply to the single-region version also apply to this solution. Keep the following points in mind, too.

This approach achieves a higher availability than a single-region deployment does.

A partial region failover involves cross-region connectivity, which increases latency. Instead of staying within a single region, app requests to the database cross the Azure network backbone into a remote Azure region.

Some implementations can temporarily tolerate this behavior. After the failed app or database is restored, connectivity returns to normal inside a single region. However, in environments with strict latency requirements, even short-lived cross-region connectivity may pose a problem.

As with the single-region scenario, the web apps in this solution use fully private connections to securely connect to both backend databases. The public internet can't access either of the database servers. This type of setup eliminates a common attack vector. Secure connections, combined with WAF integration ensures all requests are inspected for common exploits at the edge.