Most design guides focus on application traffic to those virtual networks from users either in internal, on-premises networks or from the internet (what the industry typically designates north-south traffic, because it's often represented by vertical lines in network diagrams). This article focuses on various patterns that are available for east-west traffic. That is, communication flows among workloads deployed in Azure virtual networks, either within one region or in different regions.

Making sure that your network design satisfies requirements for east-west traffic is critical to providing performance, scalability, and resiliency to your applications that run in Azure.

Spoke-to-spoke traffic can be important in several scenarios:

Patterns and topologies for inter-spoke communication

There are two main patterns for connecting spoke virtual networks to each other:

Pattern 1: Spokes directly connected to each other

Direct connections between spokes typically offer better throughput, latency, and scalability than connections that go through a network virtual appliance (NVA) across a hub. Sending traffic through NVAs can add latency to the traffic if the NVAs are in a different availability zone and at least two virtual network peerings need to be crossed when traffic is sent over the hub. There are several options for connecting two spoke virtual networks to each other directly: virtual network peering, Azure Virtual Network Manager, and VPN tunnels.

Regardless of the technology that you use to connect spoke virtual networks to each other, the network topologies would look like this for a single region: 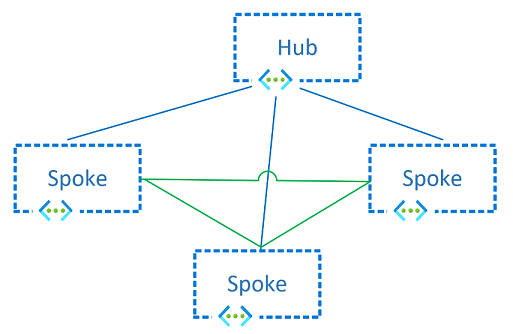 Designs that connect all spoke virtual networks to each other can also be extended to multiple regions. In this topology, Azure Virtual Network Manager is even more critical, to reduce the administrative overhead of maintaining the required large number of connections.

When you directly connect spoke virtual networks to each other in a fully meshed topology, you need to consider the potentially high number of virtual network peerings required. The following diagram illustrates this problem. In this scenario, Azure Virtual Network Manager is strongly recommended so that you can automatically create virtual network connections. 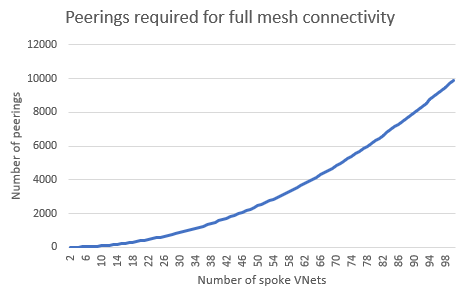 In hub-and-spoke network designs that have centralized NVAs, the appliance is typically placed in the hub. Virtual network peerings between hub-and-spoke virtual networks need to be created manually or automatically with Azure Virtual Network Manager:

The following diagram shows a single-region hub-and-spoke topology that sends traffic between spokes through an Azure firewall that's deployed in the hub virtual network. Traffic is forwarded to the centralized appliance in the hub via user-defined routes that are applied to the spoke subnets. 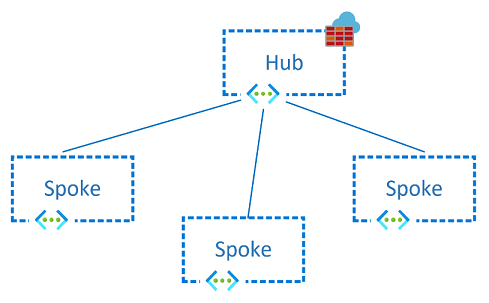 In certain circumstances, it might be beneficial to separate the network virtual appliances that handle spoke-to-spoke and internet traffic for scalability. You can accomplish this separation by:

The following diagram shows this configuration: 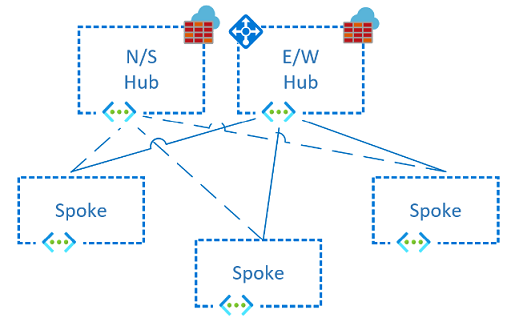 You can extend the same configuration to multiple regions. For example, in a hub-and-spoke design that uses Azure Firewall, you should apply additional route tables to the Azure Firewall subnets in each hub for the spokes in the remote region. This configuration ensures that inter-region traffic can be forwarded between the Azure firewalls in each hub virtual network. Inter-regional traffic between spoke virtual networks then traverses both Azure firewalls:

The design variation with separate Azure firewalls or network virtual appliances for north-south and east-west traffic is also possible in a multi-region hub-and-spoke topology:

Virtual WAN creates a similar topology and takes over the routing complexity. It does so both in the hubs (which Microsoft manages) and in the spokes (where routes can be injected and don't need to be manually defined in route tables). So the network administrator only needs to connect the spoke virtual networks to a Virtual WAN hub and doesn't need to worry about forwarding traffic between regions.

Many situations require a hybrid approach that combines the two patterns described previously. In this approach, traffic between certain spokes needs to go over direct connections, but the rest of the spokes communicate through a central network appliance. For example, in a Virtual WAN environment, you can directly connect two specific spokes that have high bandwidth and low latency requirements. Another scenario involves spoke virtual networks that are part of a single environment. For example, you might allow a spoke Development virtual network to connect directly to another spoke Development virtual network, but force Development and Production workloads to communicate through the central appliance.