An application may initially be targeted at a desktop web UI. Typically, a backend service is developed in parallel that provides the features needed for that UI. As the application's user base grows, a mobile application is developed that must interact with the same backend. The backend service becomes a general-purpose backend, serving the requirements of both the desktop and mobile interfaces.

But the capabilities of a mobile device differ significantly from a desktop browser, in terms of screen size, performance, and display limitations. As a result, the requirements for a mobile application backend differ from the desktop web UI.

These differences result in competing requirements for the backend. The backend requires regular and significant changes to serve both the desktop web UI and the mobile application. Often, separate interface teams work on each frontend, causing the backend to become a bottleneck in the development process. Conflicting update requirements, and the need to keep the service working for both frontends, can result in spending a lot of effort on a single deployable resource. 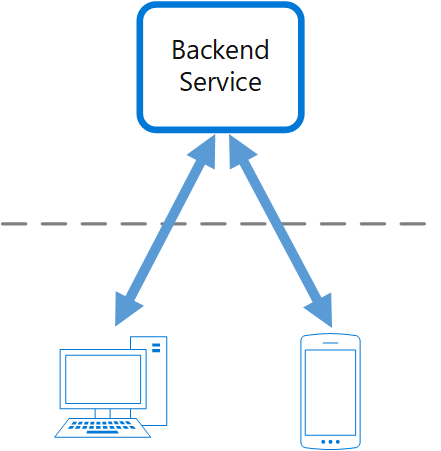 Create one backend per user interface. Fine-tune the behavior and performance of each backend to best match the needs of the frontend environment, without worrying about affecting other frontend experiences. 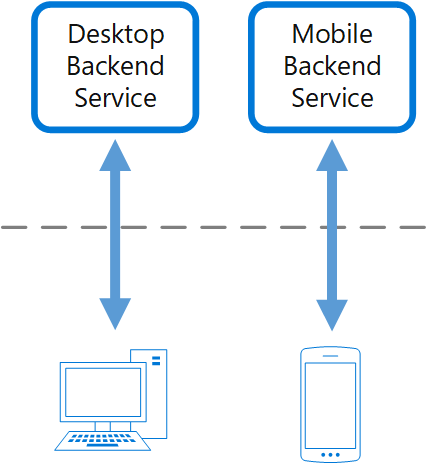 Because each backend is specific to one interface, it can be optimized for that interface. As a result, it will be smaller, less complex, and likely faster than a generic backend that tries to satisfy the requirements for all interfaces. Each interface team has autonomy to control their own backend and doesn't rely on a centralized backend development team. This gives the interface team flexibility in language selection, release cadence, prioritization of workload, and feature integration in their backend.

This pattern may not be suitable: