I have installed Anaconda and pandas are installed in a particular directory location. However when I run my Python script in Visual Studio Code the &#34;import pandas as pd&#34; returns the error above. Do I have to install pandas in another location next to Python.exe? If so how? I have tried installing pandas again in Anaconda and it returns with message that requirement already satisfied. I cannot run &#34;pip install pandas&#34; from CMD. It does not recognise pip as an internal or external command.
I will be grateful if you can help.

In most cases this error in Python generally raised:

You can run the following command in your Linux/MacOS/Windows terminal.


To be sure you are not having multiple Python versions that are confusing, you should run following commands:

Hello, if you still haven't solved it, I would ask you to check the version of your python, using the command "python -version" in your cmd, and then install the plugin using the same cmd as well, do this through anaconda prompt, make it be installed in an instance to use only anaconda if I'm not mistaken. After checking your python version, open your script using visual studio and if you are developing on a notebook, change the python version in the upper right corner, to a version greater than or equal to the one installed

To get pip to work on your cmd, try reinstalling your python by checking "add python version to PATH". 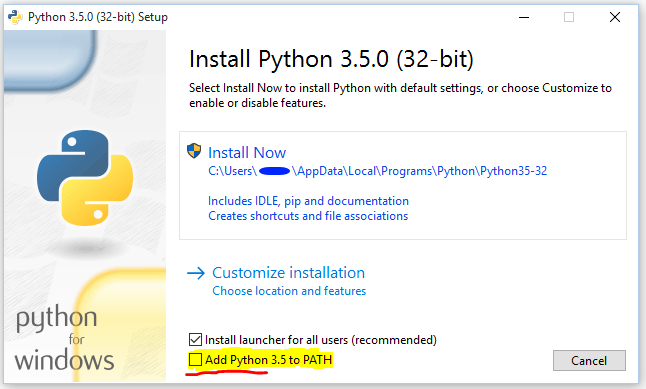 What also helped me was to use wheel to distribute it:


I was trying to import this lib as well to use some functions like nunique Pandas dataframe and run into the similar error:

3 people are following this question.

How can I gethistory of items with process IDs