We are really excited to announce the SQL Server 2016 Analysis Services CTP 3 update can be downloaded within the next few days here. This month’s update includes some great improvements and features that we think you will be very excited about.

If this is your first look at Analysis Services in SQL Server 2016 Preview, here is a small recap of the features we’ve already shipped:

With CTP3 available for download in the next few days, we are releasing many new features for Analysis Services.

The tabular model offers new features that can only be used with a SQL Server 2016 tabular server. To leverage these new features, you will need to create a new model that is set to the new 1200 compatibility level. These models cannot be deployed to a SQL Server 2014 or earlier.

The biggest change with this compatibility level is that we have moved away from using XMLA and its inherited multidimensional taxonomy as the primary representation of a tabular model. A new tabular model definition and tabular object model will be available in an upcoming CTP of SQL Server 2016 that allows for simplified scripting and development for tabular models. The biggest benefits of this new scripting language and object are:

Both the scripting language and object model are native to tabular, meaning that objects are now based on a model, table, and relationship nomenclature. In the past you had to map your tabular objects to equivalent multidimensional object names (i.e., using cube metadata when referring to a model).

Not everything described above is available in CTP3. In this CTP, scripting is not yet available in either SSMS or the XMLA client or using AMO directly. This will come in subsequent releases so stay tuned.

Upgrading models to the new 1200 compatibility level is also not available in the current CTP but will be available in a subsequent CTP. There are also some features that are sure to ship, but not yet supported publicly. For more information about capabilities we expect to deliver for 1200 models, see the release notes  Both XMLA and AMO will continue to functional with full parity on SQL Server 2016 with tabular models set to compatibility level 1103 and below.

Bi-directional cross filtering is a new feature for SQL Server 2016 that allows modelers to determine how they want filters to flow. In SQL Server 2014, filter context of a table is based on the values in a related table. With Bi-directional cross-filtering the filter context is propagated to second related table on the other side of a table relationship. This will allow you to solve the “many-to-many” problem without writing complicated DAX formula’s. For more information on Bi Directional cross filtering see this help topic.

An improved diagram view layout helps you navigate complex models with ease. The design has been optimized to understand complex relationships in your model. You will now be able to see immediately the filter direction of the relationship and the cardinality of the data. 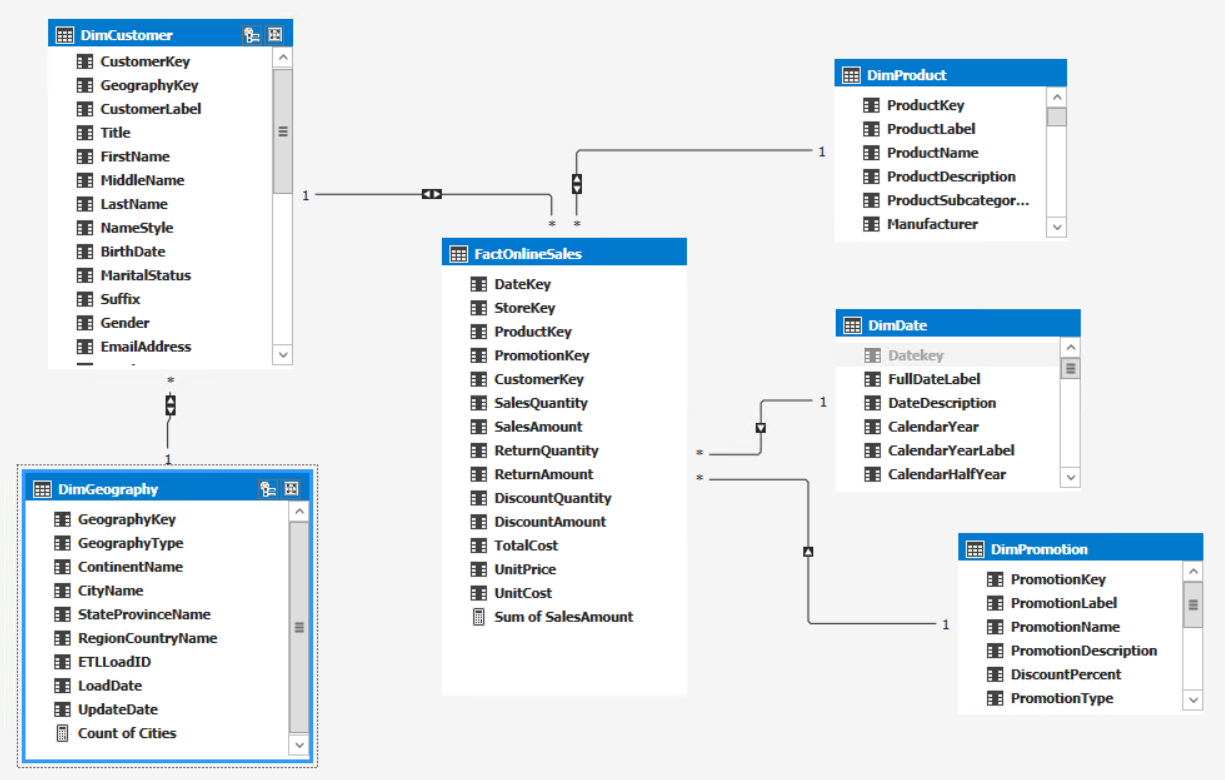 Below is a screenshot of an Excel PivotTable connected to a Tabular model in DirectQuery mode: 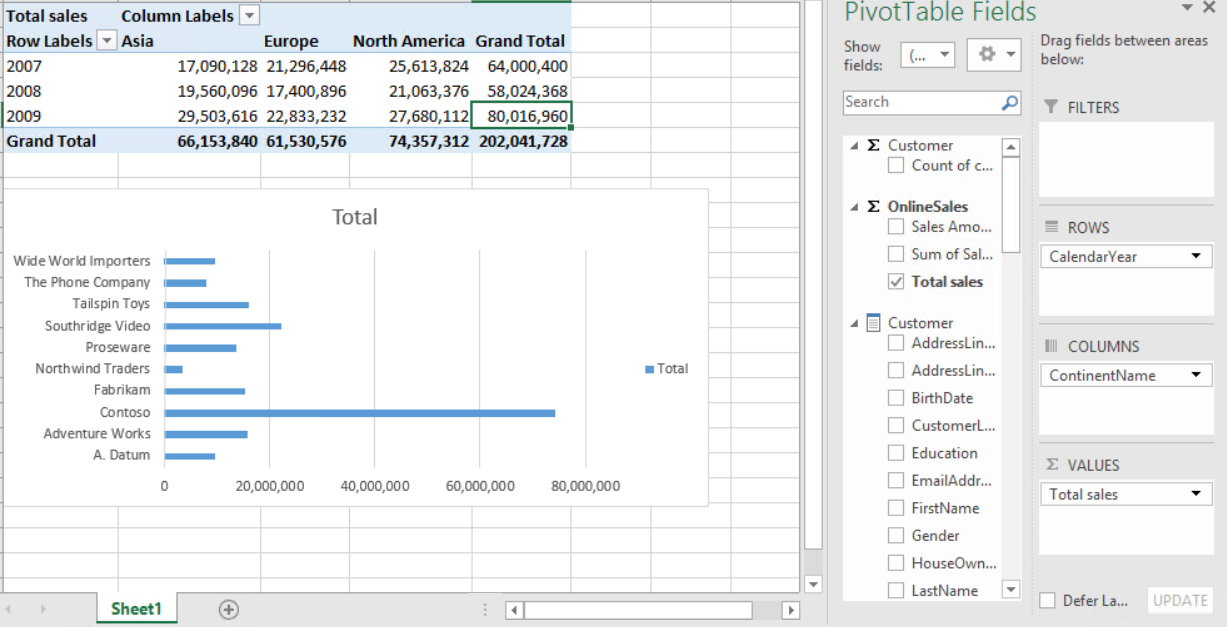 Support for Oracle, Teradata and APS for DirectQuery

DirectQuery in SQL Server 2016 can now be used to connect directly to SQL Server, SQL Server Parallel Data Warehouse (Microsoft Analytics Platform System), Oracle and Teradata. This will allow you to expose more data sources directly to your business users through the semantic layer of an Analysis Services data model without caching the data in Analysis Services. DirectQuery is not yet enabled for compatibility level 1200 models but works for all other compatibility levels. 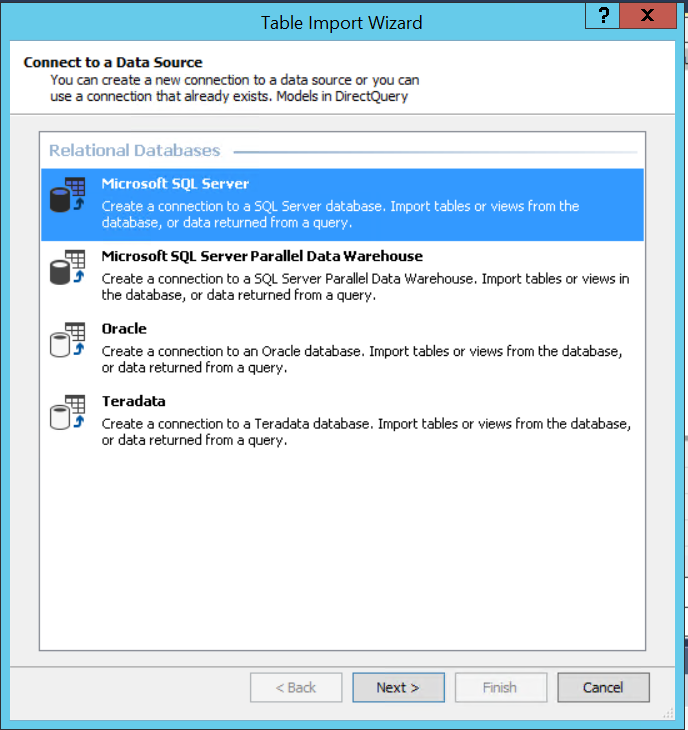 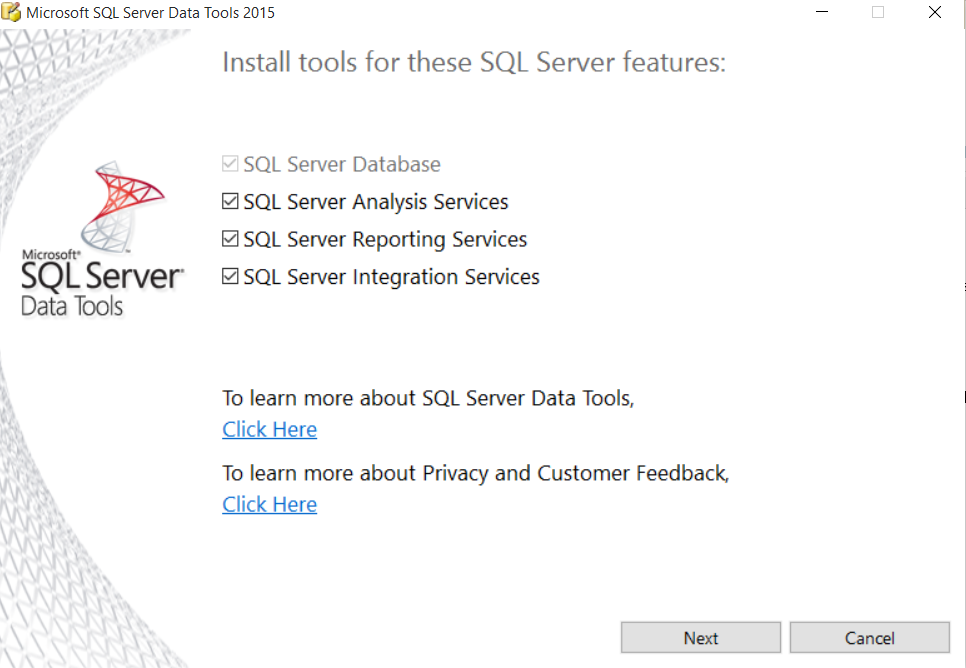 Where the previous SSDT – BI installation was about 1 GB in size, this setup is very small and will only download what you need. For example, if you already have Visual Studio installed it will not download it again. This will make incremental updates much easier and faster to consume.

This version of SSDT allows you develop Multidimensional and Tabular models for all supported versions of SQL Server Analysis Services.

Updates to the formula bar help you write formulas with more ease by differentiating functions, fields and measures using syntax coloring, it provides intelligent function and field suggestions and tells you if parts of your DAX expression are wrong using error 'squiggles'. It also allows you to use multiple lines (Alt + Enter) and indentation (Tab). The formula bar now also allows you to write comments as part of your measures, just type “//” and everything after these characters on the same line will be considered a comment.

Below you see an example of a measures that uses variables and comments and shows all items differentiated by syntax highlighting:

A new tabular script in SSDT

As mentioned before, tabular models set to the SQL Server 2016 compatibility level (1200) no longer use XMLA to describe the model. The bim file in SSDT now shows the schema using JSON:

We are planning more improvements in this area to allow for better code merges in a later release. More on this in a later blog post.

With formula fixup on a SQL Server 2016 compatibility level (1200) tabular model in SSDT will automatically update any measures that is referencing a column or table that was renamed. No need to do it yourself anymore!

Don’t you hate it when you are working on a complicated DAX formula but it is time to go pick up your kids or go to that meeting and there is no way to save your formula because it contains errors? So you either e-mail it to yourself or put it into a new text file. Well no more. You can now save incomplete measures directly in your SSDT on a SQL Server 2016 compatibility level (1200) tabular model solution and pick it up again tomorrow.

Database Consistency Checker (DBCC) runs internally to detect potential data corruption issues on database load, but can also be run on demand if you suspect problems in your data or model. DBCC runs different checks depending on whether the model is tabular or multidimensional. See DBCC for Analysis Services for details.

In my next blog post, I’ll walk you through what Bi-directional filtering is and how it solves the many-to-many dilemma. Stay tuned!