Up until now in my Lab Ops series I have been using bits of PowerShell to create VM’s in a known state, however this requires a certain amount of editing and I would have to write a lot more code to automate it and properly log what is going on. Plus I would probably want a database to store variables in and track those logs and some sort of reporting to see what I have done.  That’s pretty much how Virtual Machine Manager (VMM) works anyway so rather than recreate it in PowerShell I’ll just use the tool instead.  VMM not only manages VMs it also manages the network and storage used by those VMs. However before we get to that we need to create some VM’s to play with and before we can do that we need to understand how templates are used.  It’s actually similar to what I have been doing already – using a sysprepped copy of the OS and then configuring that for a particular function (file server, web server etc.) and building a VM around it.  It’s possible just to use the Windows Server 212R2 evaluation iso and get straight on and build a template and from there a VM.  However VMM also has the concept of profiles which are sort of templates used to build the templates themselves. There are profiles for the Application , the Capability (which Hypervisor to use) the Guest OS and the Hardware. Only the hardware profile will look familiar if you have been using Hyper-V Manager as this has all the VM setting in.  The idea behind profiles is that when you create a VM template you can simply select a profile rather than filling in all the settings on a given VM template tab and in so doing you are setting up an inheritance to that profile. However the setting in Application and Guest OS profiles are only relevant when creating a Service Template. So what are those and why all this complexity when I can create a VM in a few minutes and a bit of PowerShell?

For me Service Templates are the key what VMM is all about. If you are VMware expert they are  a more sophisticated version of Resource Groups and before you comment below please bear me out.  A service template completely describes a service and each of its tiers as one entity.. 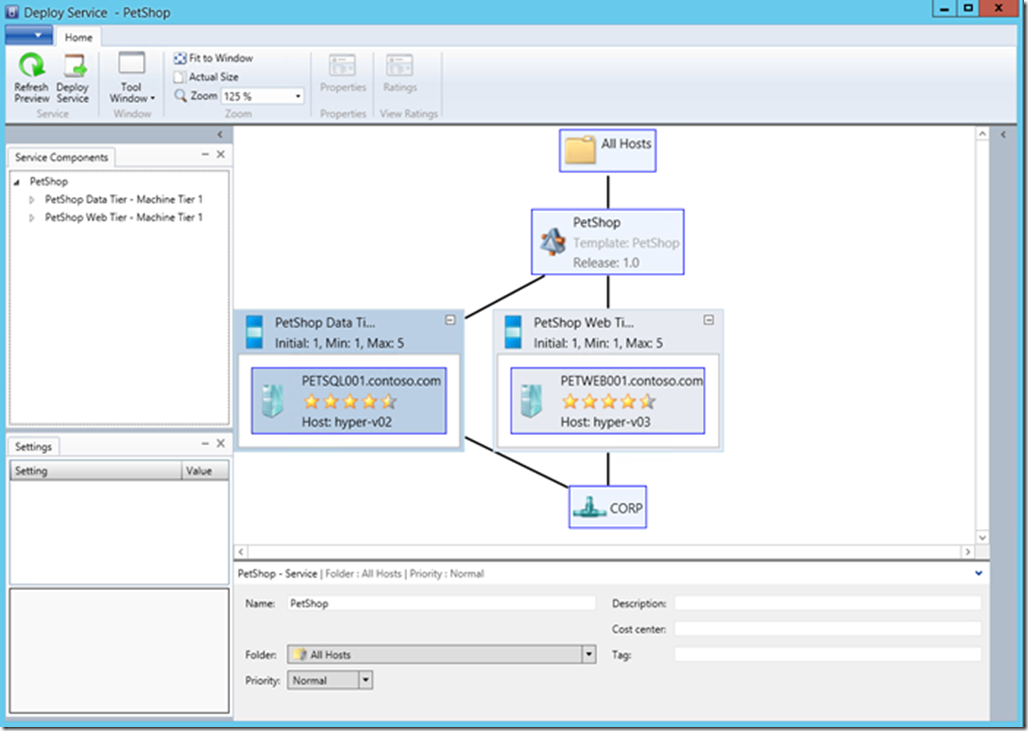 If I take something like SharePoint,  there are the Web Front Ends (WFE) the Service itself (the middle tier) and back end databases which should be on some sort of SQL Server cluster.  The Service Template allows us to define maximum and minimum limits for each tier in this service and to declare upgrade domains which will enable you to update the service while it is running by only taking parts of it off line at a time.  The upper and lower VM limits on each tier enable you to scale up and down the service based on demand or a service request, by using other parts of System Center.    There might well be away to do this sort of thing with Resource Groups and PowerCLI in VCenter, but then there are those application and hardware profiles I mentioned earlier.  They mean that I can actually deploy the fully working SharePoint environment  from a template including having a working SQL Server guest cluster where the shared storage for that cluster is on a shared VHDX file.

Services created by these templates can then be assigned to clouds, which are nothing more than logical groupings of compute, networking and storage splashed across a given set of hosts, switches and storage providers and assigned to a given group of users who have delegated control of that resource within set limits.

So templates might seem to be piled on top of one another here, but you don’t have to use all of this capability if you don’t want to. However if you do have a datacentre (the internal Microsoft definition of a datacentre has more than 60,000 physical servers) then this power is there if you need it.

If you haven’t a spare server and a VMM lab setup then you can just jump into the relevant TechNet Lab and see how this works.