Extern aliases is a feature that was introduced in VS 2005 that I don’t believe is being used very often. There are two reasons for this. First, the feature is somewhat undiscoverable, particularly if you don’t happen to be looking for it. Second, the feature itself is useful in the somewhat narrow scenario of needing to explicitly differentiate between two type names that are identical except for the assembly strong name (name, version, public key, etc.) in which they are defined.

Of course, if you happen to be in that situation this feature can prove invaluable.  I wrote the walkthrough below while we were developing the feature; it should provide a reasonable starting point for how extern aliases can be used in Visual C#. 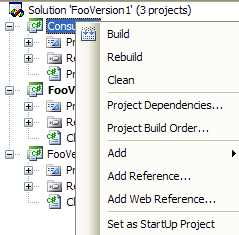 This shows a usage pattern which we expect to be relatively common when these ambiguities exist. The assembly which will be used less often will be aliased while the other will continue to exist in the global namespace (such that it doesn’t require qualification through an extern alias).