🔙 Back to the future now ⏩: Execute your Azure ☁ trained Machine Learning 🧪 models on HoloLens!

Artificial Intelligence is everywhere and powered by the Cloud. We can now go even further and bring AI to HoloLens gracefully thanks to Windows Machine Learning and Windows 10!

Let's go and make it real with a full working and reusable sample. Yes! Reusable because, you can train your own Custom Vision model and run it using this sample ♻ without any code modification.

Note: My colleagues Etienne Margraff and Matteo Pagani already gave lot of details and useful explanations about Windows ML. Feel free to refer to their good blog posts in the References section at the end of this article.

The idea is the following:

⏩✔ The app uses the model locally for evaluation and predicts what is in front of the user wearing the HoloLens!

Connect to https://www.customvision.ai/ and click on the NEW PROJECT button to create a new Custom Vision project. 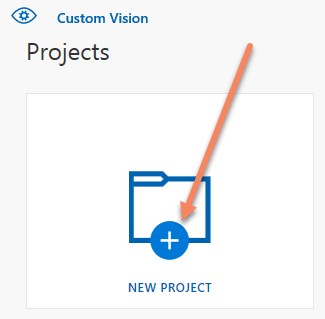 Fill in the details:

Note: Choosing the resource group option makes sense if you want to use your Custom Vision model everywhere. I mean: it uses Azure to provide a REST endpoint API that can be used in mobile apps or on computers running Windows, MacOS, Linux or even in Web sites. And all this, without to worry about the technology used.

For evaluating the model locally on the HoloLens, you can go for the Limited Trial as we will not use the Azure Custom Vision endpoint. Please note that, later, if you want to instantiate an Azure resource for this Custom Vision model's evaluation on other platforms, you can do it by clicking on the gear on the top right of the page:

Then, at the bottom of the details' page for your model, you create the Azure resource by clicking on the Move To Azure button: 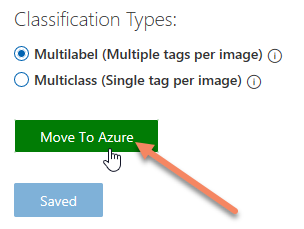 So, let's go back to our model creation:

Note: For your information, Object Detection finds also the location of the object within an image. 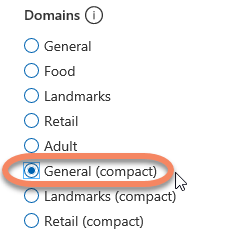 🆗 We are all set for the creation!

To do so, the steps are straight forward: 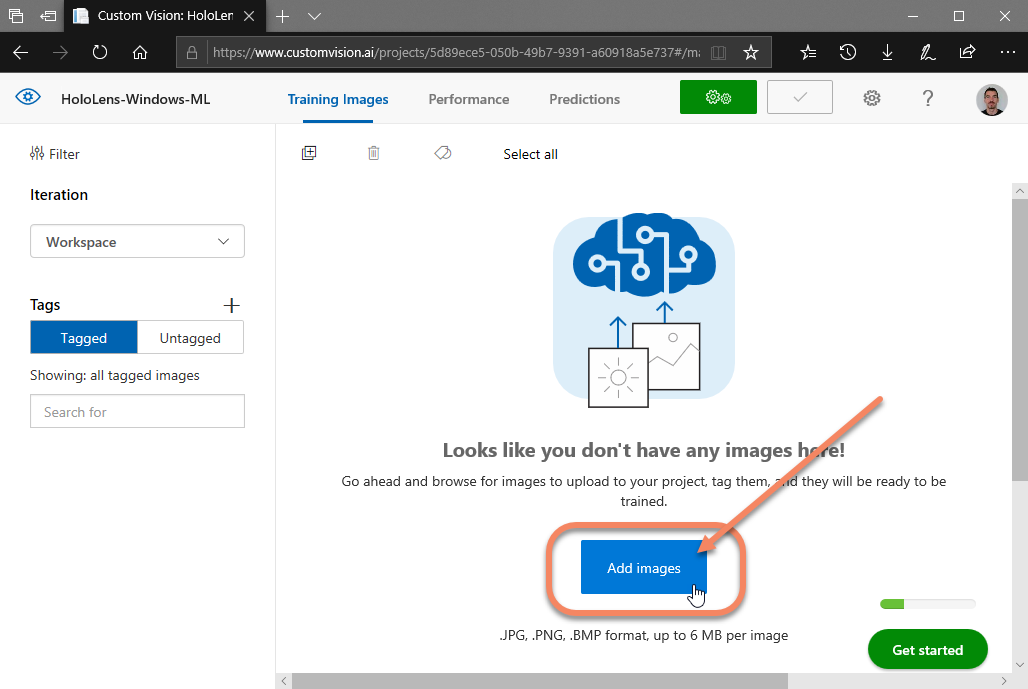 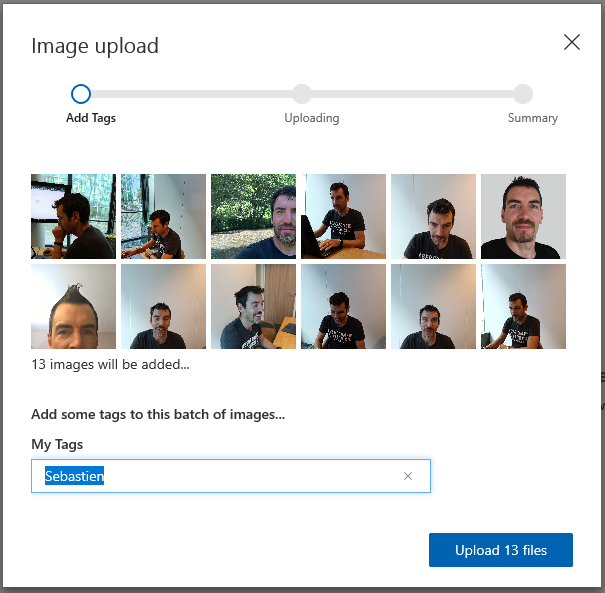 At any time, you can review, add or change the tags to the images. 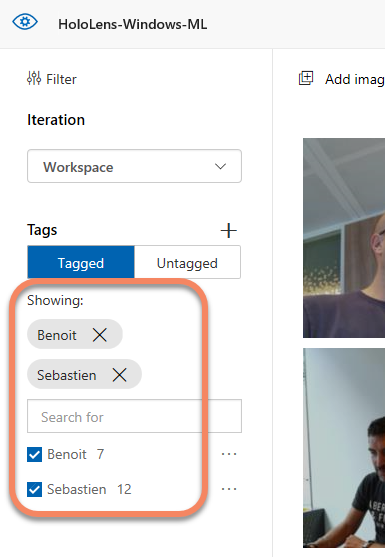 When you are done, click on the Train button.

For more details, feel free to read Test and retrain a model with Custom Vision Service.

Here are some explanations about the results we get:

Again, this steps is easy and well documented by the article written by Matteo: Just click on the Export button.

You see there that your app will run on Windows starting at the Build 17738 which means Windows version 1809 or above.

Note: As I write this article, the Windows version 1809 can be installed on HoloLens by participating to the Windows Insider Preview Slow ring.

Step 3. Create a Unity App 🕹 for HoloLens that captures the camera 🎥 frames

I worked with the following versions:

Note: You can skip this part if you are familiar with Unity and Mixed Reality.

If not, please refer to Create a Windows Mixed Reality App from 0 – The Unity project.

The Unity project has to be configured for Windows Mixed Reality:

Technical piping 🔩 for being able to give update to the user

The purpose is to be able to display a text message in front of the user from any code within the app. We first add a startup script to the scene:

From the GameObject menu Create an empty object and name it "ScriptManager".

Select the ScriptManager object in the Hierarchy and click on Add Componennt / new script and name it "UnityScanScene". 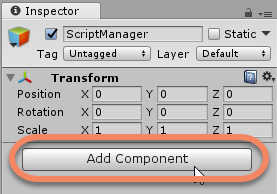 Double click on the UnityScanScene script to modify it in Visual Studio; Replace the existing code by the one below. Let me give you some details:

All this "piping" is really useful for giving feedback to the user (text or other) from any code from any class within the project. You will see it in action later in this article.

Display 📺 some text in the field of view

Add a 3D Text object as a child of the camera; Name it "OutputText"; Change its properties as shown below. The purpose is to see some text at a nice distance and in the center of the field of view. 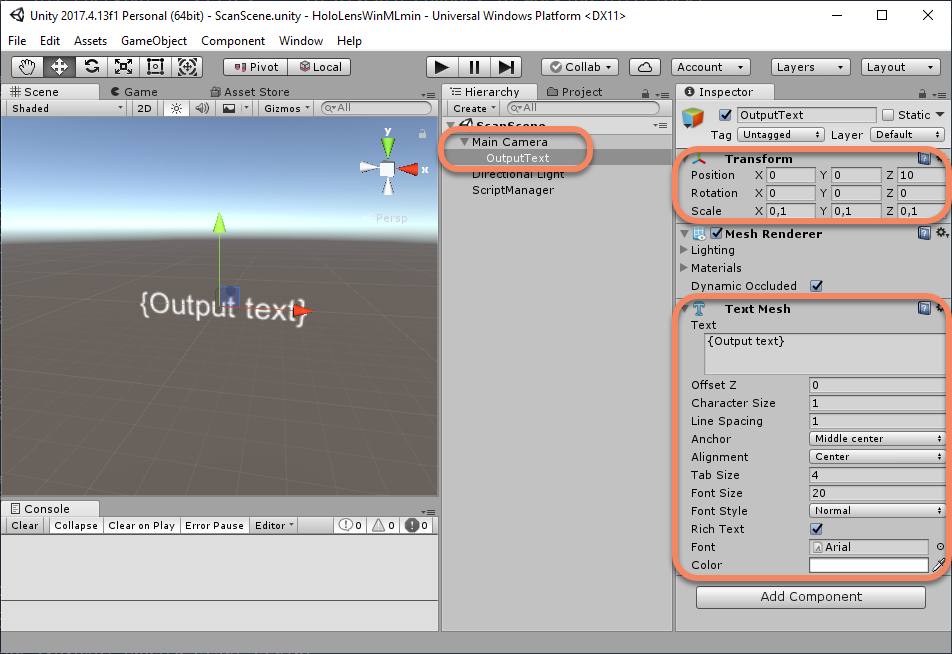 To be able to update this 3D Text object, drag & drop the OutputText object from the hierarchy to the Output text property of the ScriptManager object. This action gives to the UnityScanScene class the reference to the 3D Text to modify.

To do a small verification, you can press the Unity PLAY button.

Ok, it is now time to take care of the camera:

Add a new folder in the Assets named "UWP" in order to place within it only C# code that runs on Windows.

Replace the content of the ScanEngine.cs file with the code below.

The UnityScanScene.cs script will use this class this way:

❗ It is now time to modify the UnityScanScene.cs accordingly in order to have the code above for the Start method.

I have to give you some explanations 😅.

Also, it really initializes the HoloLens camera for being able to capture the video frames. Under the hood, we use the MediaCapture class.

For this camera helper code, I thank Etienne Margraff with his article (Preview API - Experimenting with Windows Machine Learning and Mixed Reality - Feel free to read it for further details about this code).

Step 4. Integrate ⤵ the model in the app

Adding the file in the package 📥

Just name the model "ONNXModel.onnx" and drag & drop it to a new folder named StreamingAssets in the Assets folder. 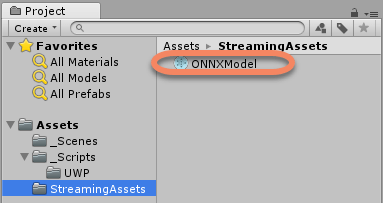 This StreamingAssets folder is special for Unity: it will be copied to the Data folder inside the UWP application that will be deployed on the HoloLens. This way, we will be able to load the file by code from the package installation folder.

Note: It is also possible to add the ONNX file directly to the resulting C# UWP application. The Unity way of adding it is not mandatory.

Add a wrapper class 🔧 for the model

This was the tricky part of the job and the one that changed from the Preview APIs and the ones released. The long story is well detailed by Matteo Pagani in the two referenced articles (Preview API - Add a bit of machine learning to your Windows application thanks to WinML and Upgrade your WinML application to the latest bits).

For today, long story short: we do not use the generated class by Visual Studio for our model wrapper but the following one below. This class is 'generic' and works for your own custom vision trained model.

Here are the steps:

In Unity, add a new script named 'ONNXModel' in the Assets/UWP folder. This is our 'generic' model wrapper class. 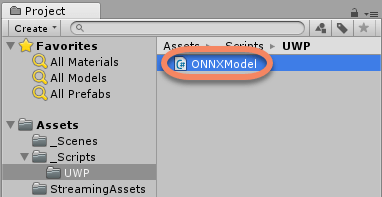 Note: All code dedicated to UWP is surrounded by #if UNITY_WSA && !UNITY_EDITOR. It allows us to be sure to run this code only on Windows.

The CreateOnnxModel() static method is in charge of loading the file. The EvaluateAsync() performs the model' evaluation.

Again, this code will not change if you create your own custom vision model (Classification / Multilabel / General Compact).

Let's add now a 'high level' model helper in order to put the glue between the captured frame and the model evaluation.

Load 📤 and evaluate ⚙ the model for each frame

In Unity, add a new script named 'ONNXModelHelper' in the Assets/UWP folder. 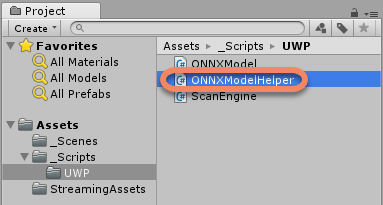 So, there is an action for you 😅: Please replace // HERE, We will evaluate the model by

We should have all set 🤯😪🥳! You just have to build the Unity app; It generates the C# UWP Solution that you can compile in MASTER x86 and deploy to you HoloLens.

Here is what you can get 😂 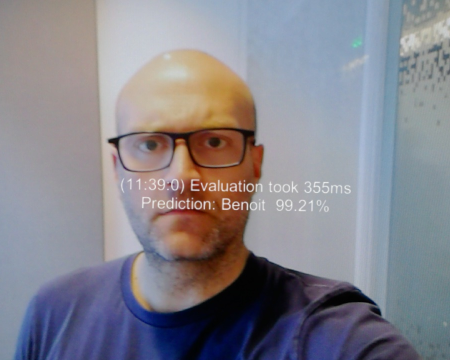 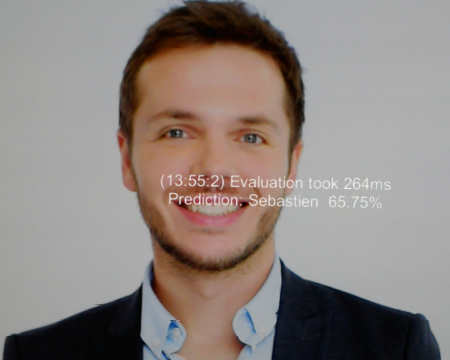 Disclaimer ⚖: Again, this model was only trained with less than 20 pictures which is a way too low to pretend having a correct model for prediction. But you have the idea!

All updated and optimized source code is on GitHub - https://github.com/Microsoft/Windows-AppConsult-Samples-MixedReality/tree/master/HoloLensWinML.

Talking about performance: The app deployed on HoloLens loads the ~3Mb ONNX model in about 300ms. The model's evaluation is done in average in 250 to 400ms. So right now, we have a minimum of 2 frames analyzed by second; Based on the fact that only the HoloLens processor does the job, it is pretty good: We can imagine scenarios in factories for safety or monitoring, in maintenance or diagnostics operations or even in medical assistance.

The future? Who knows? Alex Kipman and his team for sure 😉

What I can say is that work is in progress a new Holographic Processing Unit (HPU) for HoloLens:

...the second version of the HPU, currently under development, will incorporate an AI coprocessor to natively and flexibly implement DNNs.

DNN stands for Deep Neural Networks which is what we are using 🎉. We can expect that this future AI chip would be dedicated for this kind of work and performance would be decoupled 💹!

Last word of this article is from the link above:

Mixed reality and artificial intelligence represent the future of computing, and we’re excited to be advancing this frontier.