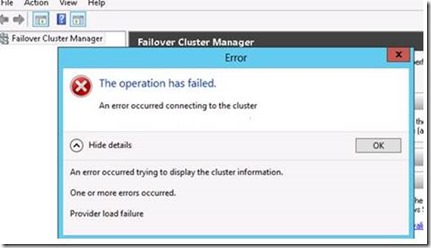 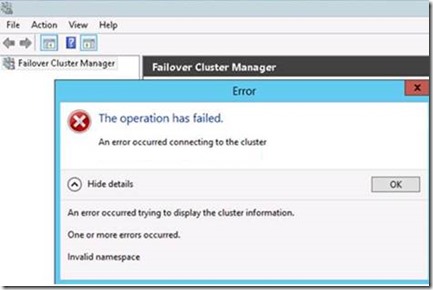 Unfortunately, it does not give any indication of which node is missing the WMI namespace.  One of the ways you can check to see which one has it missing is to run the below command on each node of the Cluster.

It can be a bit tedious and time consuming if you have quite a few nodes, say like 64 of them.  The below script can be run on one of the nodes that will connect to all the other nodes and check to see if the namespace is present.  If it is, it will succeed.  If the namespace does not exist, it will fail.

In the below example, you can see that one of the nodes failed.

To correct the problem, you would need to run the below from an administrative command prompt on the "failed" node(s).

Once the Cluster WMI has been added back, you can successfully open Failover Cluster Management.  There is no restart of the machine or the Cluster Service needed.

Now, the next question you may have is, "well how did I get this way in the first place".  The answer is actually a command from the old days to "fix" the WMI repository.  In earlier days, if there was a problem with WMI, they would change to the above directory and run mofcomp.exe *.mof.  This will take all the .MOF (Managed Object File) files in the directory and recompile them.  The problem with this command is is does "all" of them.

When you install Roles and Features that utilize WMI, there is a .MOF file to add itself to the repository.  There is also an uninstall .MOF file to remove itself if the role/feature is removed.  When you run with the *.mof switch, it could run the install first and the uninstall second.  So you are basically removing the namespaces to fix a problem.  Cluster is one of the ones that has an uninstall file.  To correct it, you have to run the above.  Since there are multiple uninstall files for other roles/features, you may need to run with those install files as well.

The proper ways of recompiling the WMI Repository is with the use of WINMGMT.EXE.