Servicing Stack improvements in KB2821895 for Windows 8, and How its assists the upgrade to 8.1?

My name is Aditya and I am a Sr. Support Escalation Engineer for Microsoft on the Windows Core Team. This blog is a continuation of the previous Servicing Part 1. So to understand this blog better, it is recommended that one reads the previous blog post.  As mentioned in the previous, this is a 4 part Blog series on Windows Servicing.

This feature will back port Windows 8.1 features that reduce the disk footprint of the component store. Any freed space will be reserved for system use in upgrading to Windows 8.1.

As from the last blog, we discussed about the hard work put in by our Core Deployment Platform (CDP) team in terms of reducing the amount of free disk space required for small footprint devices. Even with these reductions, an upgrade requires at least 5 GB of free space.

To further reduce the perceived amount of space required, a Servicing Stack Update (SSU) for Windows 8 has been created that back ports Windows 8.1 Component Store Footprint Reduction features. It also introduces the maintenance task for controlling the footprint reductions and a set of Deep Clean operations. Any space freed by the maintenance task will be reserved for use by the Windows 8.1 upgrade process.

The below features were targeted for the down-level port:

1. Delta compression of the Component Store

The features are used by the maintenance task to scavenge disk space. In addition to back porting these features, the servicing stack update must reserve free space for upgrade to Windows 8.1 Client. As we do not encourage upgrades of Windows Server 2012, this feature cannot reserve space on server SKUs, it is only for the Client SKU’s.

When we install Windows 8 (32bit), on a machine, and the check the size of the WINSXS, folder, we should see something like as shown in figure 1: 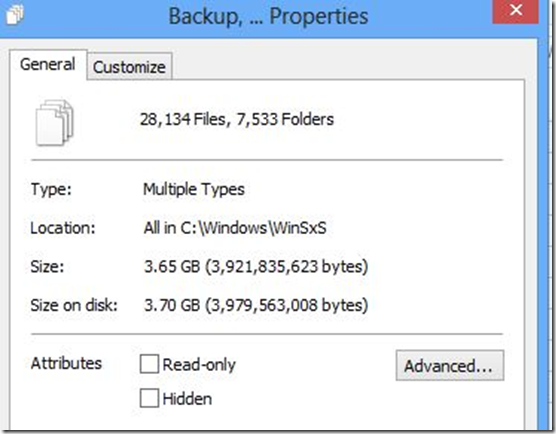 When we perform Windows Update for the first time, on the machine via the Control Panel Applet, we should have about 84 updates, which come up to about 515mb, as shown in figure 2:

After the reboot of the machine the WINSXS, folder sees a little growth in size, which is about 2gb, as shown in Figure 3: 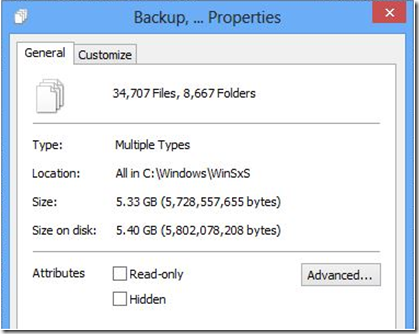 Looking at the amount of space that has been taken up, after applying Windows Update, we should download and apply the update KB2821895. 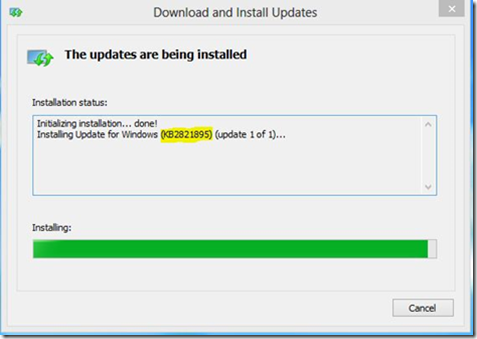 After the update is installed, a maintenance task will run weekly and continue to reclaim disk space up to the time the machine is upgraded to Windows 8.1 . It creates a temporary file equal to size of space saved by delta compression during the reduction of the footprint. This file is hidden and marked as OS file so, that it is not easily visible.

Location of reserve file is:
%windir%\winsxs\reserve.tmp

The size of this file is saved to registry key: HKEY_LOCAL_MACHINE\SOFTWARE\Microsoft\Windows\CurrentVersion\SideBySide\Configuration\[reserve]”. This value is used to determine if the reserve file was created on machine and then deleted.

Note: Only Windows 8 SKUs that are capable of being upgraded through the Microsoft Store will have space reserved in the temp file.

During the Windows 8.1 store upgrade process, this file is deleted and the reclaimed disk space becomes free space which should ensure a successful upgrade to Windows 8.1.

Currently, when multiple updates are being applied to a system and one or more of the updates requires a reboot, all updates after the “first update that requires reboot” are installed during the reboot process.

In the current servicing stack design, Windows Servicing Stack passes a flag to the Servicing Infrastructure to pend the installation of a package if:

The limitations with this design are:

The current design that we have in Windows 8 and Server 2012, looks something like this:

With this new feature, Windows Servicing Stack would not check to see if a reboot is pending and will always try to install the update completely. The operational flow of the new design looks like this: 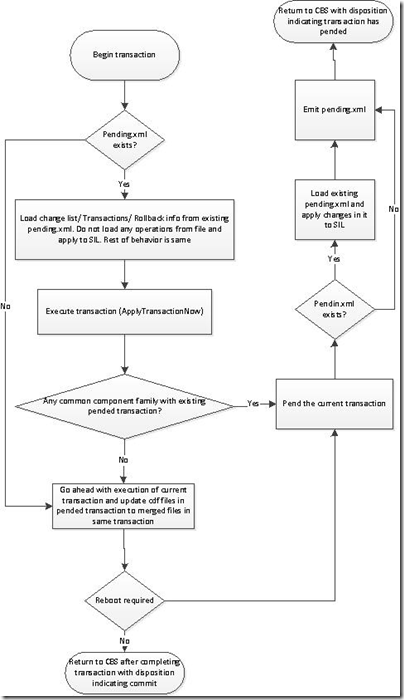 In Windows 8.1 and Server 2012 R2, updates that don’t require a reboot would be completely installed and only those that require a reboot are pended for installation during reboot. Smart pending logic applies to online servicing operations only.

The following types of packages are not going to be smart pended due to performance and reliability reasons:

The below diagram describes the logic: 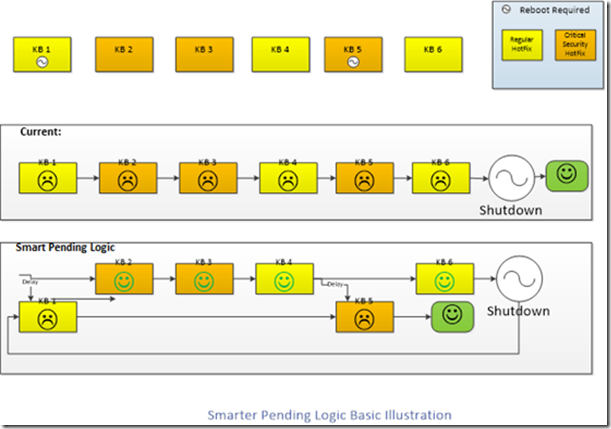 I hope this blog would have helped in understanding the changes made to Windows 8 OS and the new features added to the Windows 8.1 OS, especially with the Smart Logic put in to make sure that we save more drive space.

The next blog in the series we would be discussing about the automated maintenance tasks to check for system file corruption, file system health, cleaning up unused drivers etc.?? Till then happy reading….