Ned here again. Have you ever visited Snopes.com? It’s a terrific urban legend reference where they research folklore. Snopes is the place you go to find out if eating Thanksgiving turkey makes you sleepy (it doesn’t), if Coca Cola can dissolve a tooth overnight (it can’t), or if a man really did live in a Paris airport for 8 years (he did!).

Today I’m going to talk about another urban legend – that removing the Remote Differential Compression feature from Windows Vista will make your file copying faster over the network.

Remote Differential Compression (RDC) is a Microsoft algorithm that was originally created for DFSR five years ago. RDC divides a file’s data into chunks by using signatures. When a file exists on two computers and the file is modified, only the differing chunks need to be sent to the other computer.

An application needs to be specifically written to support RDC. Windows Vista and Windows 7 include MSRDC.DLL to allow apps like Windows Live Messenger to use that functionality. 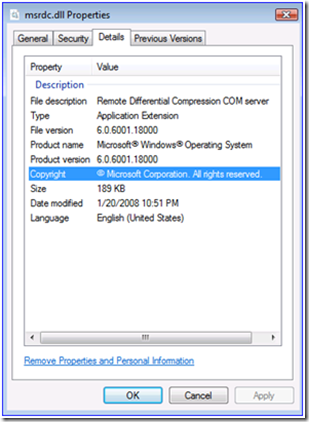 The feature can be turned on and off within the Control Panel “Program and Features” applet.

When turned on, the MSRDC.DLL will exist in the %SYSTEMROOT%\System32 directory. When it’s turned off, this DLL is removed.

Unfortunately, the Internet is full of people telling you that RDC will somehow make your network communication slower. I have no idea how this got started, but this nonsense has been reprinted on thousands of websites by people unfamiliar with the Scientific Method. Folks have actually convinced themselves that turning this feature on or off has some affect on file transfer speeds. While there are a variety of things you can do to speed up Vista file copy performance, this isn’t one of them.

So after hearing this baloney for the umpteenth time, I set out to debunk it once and for all:

Here is what I found after the ten total passes, with and without RDC installed:

Hmmm… What if I sort my data points highest to lowest?

Wait – so removing RDC actually made it slower? Not really – the variance there is well within any respectable margin of error. These results mean that the two sets of copies were 99.87% identical. Removing RDC did nothing at all. There are going to be various performance differences when copying a file, depending on what else happens on the network, what the computers are doing, and I think when people claim RDC removal made things ‘faster’, it’s because they are not testing repeatedly over time to see variance.

First, I listed loaded modules - all libraries and drivers loaded in the kernel memory space:

Note how MSRDC.DLL is not loaded in memory in the Kernel space. It’s still possible that a given process or service might have it loaded though, so then I listed all processes to see which ones would be interesting and likely to be involved in file copies. The TASKLIST output comes in handy here to see which PID is which hexadecimal CID value. In my case though I dumped them all just for exploratory purposes.

I know that the Workstation Service is responsible for SMB file copying, and the robocopy process is definitely doing work, so I examined those.

Note how neither process has MSRDC.DLL loaded either. It’s simply not being used, and a module that is not being used cannot possibly affect anyone. Remember, an application has to be coded to use RDC. Nothing in the Kernel, in Robocopy, or in the Workstation service uses RDC at all in Vista or Win7.

By now you want me to get to the helpful part. Here’s a short list of some things that can improve your file copy network performance on Windows Vista and Windows Server 2008:

It’s amazing that a component that was designed to speed up network file performance can somehow be vilified as a cause of bad performance; especially when it’s not even being used. I welcome people following my steps and telling me what you find out.

Don’t believe everything you read on the Internet. Unless I wrote it. :-)