In part 1, a basic Azure Web App website was built and deployed using VSTS Build.  Part 2 illustrated how additional files could be included when building a web project.   In this post, Gulp will be added to the VSTS Build  pipeline.

Gulp is a task runner for automating routine development tasks.  For example, a common use of Gulp is to minify the javascript and css files and/or perform other optimizations for a non-development environment.  In this example we want to add the ability to alter the assembly version during the build.

The ASP.Net template and Visual Studio added most of the references an setup we need to run Gulp.  In order to add to our project, we need two files: Gulp.js and package.json.  Gulp.js contains the defined tasks while package.json lists any referenced packages required.  The first step is to add a Gulp.js and package.json file to your project (Add New Item -> Gulp Configuration File and Add New Item -> NPM Configuration File).

Depending on what install you have done you might need to perform an npm install gulp to get things to work.  Please see references for how to get setup.

In the packages.json, we will bring in a couple of helpful packages for parsing supplied parameters (Yargs) and for updating the assembly file (DotNet Assembly Info):

Working with Gulp is surprisingly simple. The defined task below will apply the supplied version number against the assembly version and the file version.

Tip: if you receive a Cannot find module error when running the Gulp task locally, verify you have have run npm install locally and the packages were downloaded successfully.  You can review the modules in the node_modules sub-folder: 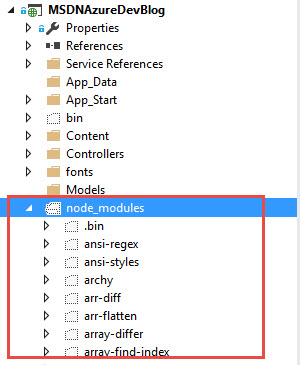 Once the files have been pushed to the server, we need to add two tasks to our Build pipeline.  First npm will be run to install the modules required to run Gulp.  In the sample, project the working directory of the package file was specified:

Next a Gulp task will be added to the build process.  The version argument is specified to include the BuildID 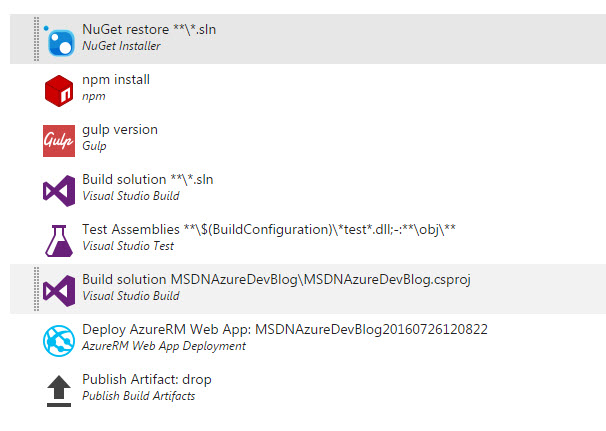 In Part 4, Load Testing will be reviewed and brought into the build pipeline.