An alternative to ConfigureAwait(false) everywhere

One of the general recommendations you may often read is to use ConfigureAwait(false) in library code. This is so that when the library is used, it does not block the synchronization context in use by the application (e.g. the UI thread). If the library doesn’t know anything about the app, it doesn’t depend on the application’s context and doesn’t need to run within it. This makes sense but it ends up truly meaning that you have to put ConfigureAwait(false) on every async call in your entire library. To me, that seems ...excessive.

As I see it, If you are using ConfigureAwait(), you probably really care about it and want it to actually work. Unfortunately, because async methods might actually complete synchronously, the call to ConfigureAwait() might not affect anything. That means you have to put it on the next async call too, and so on, until it is on every single method in your library.

Tagging every single call with a decorator method has always bothered me as inelegant and it clutters my code. It’s also something that can easily be forgotten when updating or adding new code. But there is also another more hidden potential issue – the first async call tree. The first time you attempt to await an async method, it doesn’t get the benefit of ConfigureAwait(false). Look at this code

This behavior can be seen by running this sample WPF application

Using this app, lets look at a couple of scenarios and see how the it behaves...

“Run Case 0” runs a regular set of async/await calls without the use of ConfigureAwait(). This is the basic async/await code as it is usually implemented.

The whole operation takes a few seconds. While this is running, the UI periodically freezes because WorkWithoutCA() calls BlockingWorkAsync() which calls Thread.Sleep(1000). During this sleep time, the timer doesn’t change. The behavior looks like this:

It’s this 2nd step that I’m concerned with in this discussion. Obviously the overall behavior is much better because in this case the UI is unfrozen for a majority of the time. But if we are concerned about this at all, why aren’t we concerned about eliminating it completely? I want to push that behavior across all of my library’s functionality, not just stuff that happens after the first await.

“Run Case 2” solves this in the way that is typically recommended. You push ConfigureAwait() all the way down the call tree.

The behavior is now as we desire it to be – no blocking the UI during any of the calls.

The main problem with this approach is that now we have a maintenance issue. Every new await needs to have ConfigureAwait(false) put on it – just in case. It also tends to clutter the code since this one thing is now everywhere. As a matter of style it makes the code less readable.

So I am proposing an alternative…

What if we did what ConfigureAwait() does for us, but we do it once at the beginning of our callstack and didn’t have to think about it again? Unfortunately, that means not using a fluent API. The fluent API of ConfigureAwait() is the reason for the “first call” problem. The snippet of code below does not use ConfigureAwait(), but uses a helper object to temporarily remove the SynchronizationContext manually (and restores it before returning to the caller). 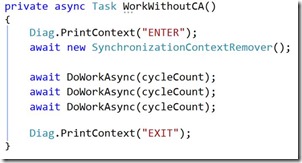 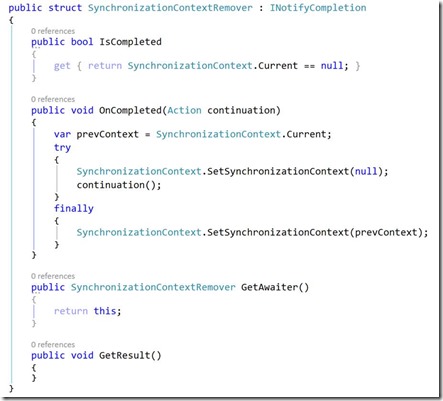 This gives us the same behavior as Case 2 but the code is cleaner. With this technique, I no longer have to remember to put ConfigureAwait(false) all over my code which makes it easier to maintain and to read. The only thing I need to do is insert a single await on the helper object at the beginning of my public APIs and all its children will get called on the default context automatically with no changes to them at all.

If you have anything to add or suggest, please leave a comment below.