Recently I came across an issue over a table that was being inserted into quite intensively, by concurrent operations. The issue, which is not that uncommon, is dealing with PAGELATCH_EX contention, namely when a table has a clustering key that conforms with the concept of a small and monotonically increasing value, such as IDENTITY, and the table itself is somewhat narrow.

First, what is a PAGELATCH? In a nutshell, a PAGELATCH is used to synchronize short term access to database pages that reside in the Buffer cache, as opposed to a PAGEIOLATCH, which is used to synchronize physical access to pages in disk. These are normal in every system, the problem being when there is contention. In this case when there are many concurrent accesses to a single page, causing waits and hindering the ability to perform these inserts efficiently.

So let’s create a table to repro the issue:

As you can see there is only one column that is a usual candidate for the clustering key (ID) and a single column where data is inserted, making this a narrow table. Now what happens when 120 concurrent connections insert 100,000 rows each? For that purpose we will use the code below: 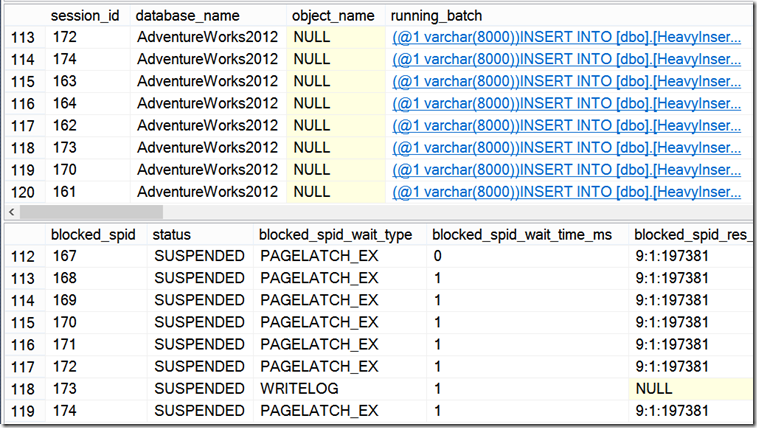 The object id can be matched to an actual object name using the OBJECT_NAME function, which gives us the HeavyInsert table we created:

So how to minimize this kind of bottleneck?

There is a really good whitepaper that about this contention scenario, with several approaches to dealing with this type of contention that work really well. But I also found another solution that works really well, namely one that can be implemented specifically in SQL Server 2012, and does not use an Enterprise-only feature. But more on that ahead…

These are the alternatives the whitepaper provides:

First we create a table with an extra computed column, which is marked as persisted.

As you can see, the hash will be the partitioning key, and that will conceptually allow the inserts to be distributed over several partitions in a pseudo-round robin fashion (not exactly, but close enough for the purpose of this discussion). Let’s determine if that is the behavior using the code below, again with the same 120 concurrent connections:

Checking for contention, we see on the top the same 120 concurrent sessions, and in the bottom we have some 65 blocked spids, but now the prevalent wait is WRITELOG, and much less PAGELATCH_EX contention. For the one seen below, using the same DBCC PAGE we can see it is again a data page, this time in the HeavyInsert_Hash table. 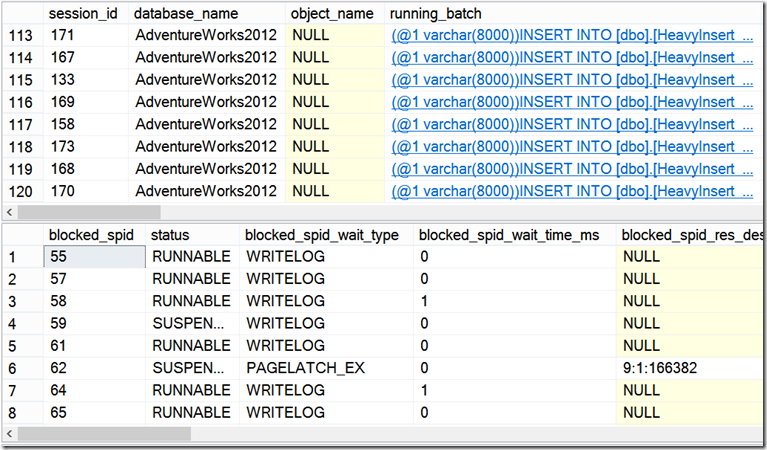 We also see WRITELOG waits are occurring, and when this happens we should check what are the latencies we are getting from the volume that holds the relevant transaction logs.
Remember that while I’m running this test on an SSD, it is a laptop, not an enterprise-class storage. Still, for the elapsed time of this test, the counter Avg. Disk sec/Write for the transaction log drive (yes, it’s on C) averaged to just 2ms, although it spiked at 17ms: 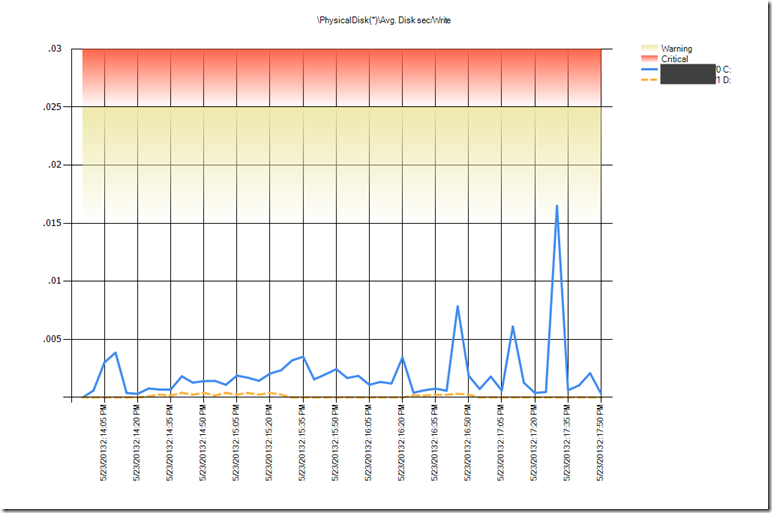 This insert cycle took a little over 2 minutes (02:13.055) and we have effectively minimized the PAGELATCH_EX contention in our table, while being able to insert much faster. With the same 11,999,880 inserted records, we can see how these were spread out by partitioning our table, although still writing to the same file and filegroup: 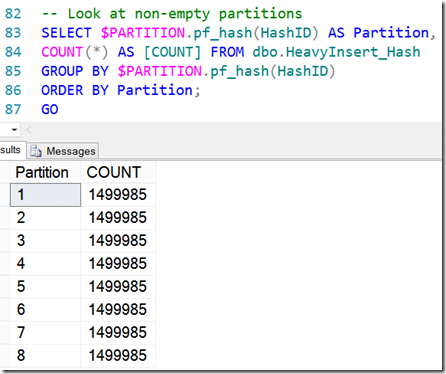 Much better, but I mentioned a different solution that did not require using an Enterprise-only feature, while still taking care of this contention.

The alternative is using bit reversal using the SEQUENCE feature introduced in SQL Server 2012, credits to DangerousDBA (blog) for the original idea.

For this, we will create a sequence to generate the incremental values we need as our clustering key:

And the bit reversal function that will generate an integer value:

And a new table for this test, which is the very same as our initial table:

The integer value generated by the function will be used during the inserts, and conceptually it is random enough to spread out the inserts by different pages. So we have to get the next value for the sequence, and use it in the insert statement:

Once the workload is running on the 120 sessions, while checking for contention we can see that PAGELATCH_EX contention is occurring on resource 9:1:24273:

What we can also determine, for example looking at spid 163, is that the running statement during the latch contention is the NEXT VALUE FOR sequence. Using DBCC PAGE, we can see that the object id is 60, which is the sysobjvalues system table. This table is used to hold metadata while accessing the sequence to get the current value.

So it seems that we are not incurring in PAGELATCH_EX waits in the data insertion itself, but while getting the next value for the sequence. That can be resolved using the sequence cache for a large value, like below:

We have set the value at 10,000 (mileage may vary) and this way we will have less frequent access to the sysobjvalues system table.

Running the same insert workload we have no visible contention as before. For the same 11,999,880 inserted records, the cycle took a little over 4 minutes (04:00.961), so I find this to be an elegant solution for addressing PAGELATCH_EX contention in this scenario.

As a summary, if we analyze the Wait Statistics: Page Latch waits performance counter for the duration of the tests, we find that while the hash partitioning scenario provides better performance, the bit reversal gets the lowest PAGELATCH waits.

Hope you find it useful!

Disclaimer: I hope that the information on these pages is valuable to you. Your use of the information contained in these pages, however, is at your sole risk. All information on these pages is provided "as -is", without any warranty, whether express or implied, of its accuracy, completeness, fitness for a particular purpose, title or non-infringement, and none of the third-party products or information mentioned in the work are authored, recommended, supported or guaranteed by Ezequiel. Further, Ezequiel shall not be liable for any damages you may sustain by using this information, whether direct, indirect, special, incidental or consequential, even if it has been advised of the possibility of such damages.