As pointed out in my previous post, debugging on Linux brings a few new twists to those of us used to the Windows debugging landscape.  One of these twists is the need to produce a core dump. On Linux a common way to capture a dump is to generate a core dump (gcore, etc.)

You may have experienced an application crash and the user mode, dump capture on Windows.  An application crash is commonly associated with the Windows, ”Watson” and Windows Debugger frameworks.  The difference is that a core dump generally contains the entire memory of the process (user mode) where the Windows Debugger captures contain the faulting thread’s memory and a bit more.  Lets look at a few examples (areas in green represent memory pages included in a capture.) 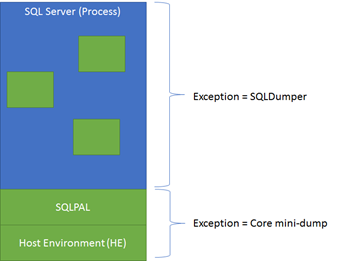 As you can glean from the file sizes, a mini-dump version of the core dump is preferable.   Instead of dumping the entire memory used by the SQL Server process, include the threads, ring buffers and bit of supporting memory.   This usually reduces the size of the core dump to ~3GB, compressing to less than 200MB.

On Windows, SQLDumper is used to capture a mini-dump of the user mode memory.   SQLDumper leverages the APIs exposed by dbghlp.dll, specifically MiniDumpWriteDump and its callback.   In the callback we are able to indicate what threads and memory are to be included or excluded.   When SQLDumper is triggered from SQL Server we also provide a rich, but small, set of additional addresses to include (ring buffers, schedulers, etc.)   The dbghlp API is able to enumerate the threads, include indirect memory based on pointers stored on the stacks and other information.

When designing the core-mini dump capabilities we looked at several solutions before landing on Breakpad.  For example, Linux provides an madvise ABI, with the option to exclude the region from a dump.  Excluding is helpful but you have to mark the memory pages before you know about a problem and the madvise setting can lead to splitting of the virtual address range(s) and address range exhaustion (proc/$pid/maps.)   There are also options that can be established to exclude certain types of memory, such as no mapped memory regions, but that is too broad of a stroke.

Using additional logic to add memory in combination with Breakpad we are able to target those memory regions relevant to an issue.  This technique provides high fidelity for the dump capture and debugging efforts while minimizing the size and time of the capture.  Breakpad’s future replacement is Crashpad but we are unable to leverage, it at this time, due to limited support for Linux systems.

The Breakpad dump understands how to enumerate the ELF based threads (proc/$pid/tasks) and memory regions (proc/$pid/maps.)  However, it does not add indirect memory references and other regions that may be helpful.  Similar to the Windows dbghelp API, Breakpad provides a client library and ABI for writing the core-minidump.   While Breakpad does not provide a callback it does allow you to pass in a list of additional memory ranges to include in the dump.  This allows us to identify a rich, but small, set of additional addresses to include in the core-minidump.

With a bit of filtering logic, along with understanding the interworking's of SQLPAL, HE and SQL Server, we are able to generate the additional memory range list and leverage the Breakpad client.

The first stop in this journey was understanding the Breakpad format and achieving the proper dump capture.  Breakpad writes its own dump format that looks a lot like the Windows mini-dump format or ELF core dump format.   The files have a header, tables describing information and the associated data blocks.   For example there is a thread list in the Breakpad output containing an entry for each thread and the internal pointers (RVA – relative virtual address offsets) to stack memory.  The following diagram could be a high level view of the Windows, ELF or Breakpad file as they are similar in design. 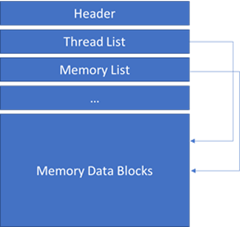 When Breakpad is invoked to generate a core-minidump, the following information is captured and written to the file.

Microsoft Alterations
A few modifications were required for the Breakpad capture, client library to accommodate a service such as SQL Server.

As mentioned, Breakpad is a client library which requires an application.  Codename “paldumper” is the ELF based, client application used to determine the additional memory regions to include in the core-minidump.  When an exception is encountered in SQLPAL or the Host Environment paldumper is invoked to capture the core-minidump.

The heart of paldumper is the understanding of the the SQLPAL and HE address space.  paldumper builds the targeted list of additional memory regions to add to the capture.  For example, Breakpad is not aware of the TEB for the thread.   However, paldumper understands and includes the TEB for the targeted threads.  Other areas such as ring buffers and even indirect memory are added without requiring a full, core dump.

When paldumper is invoked it sends and waits for the SIGSTOP to occur against the target process.   This allows paldumper and Breakpad to act upon the same static state of the process.  Depending on the dump type, outlined below, various additional memory regions are accumulated for the dump request.   Once the regions are identified the Breakpad client library is invoked to generate the dump.

Note: The dump type can be dynamically controlled using the mssql-conf , dump options (coredumptype, captureminiandfull in the coredump section of the /var/opt/mssql/mssql.conf file).

Note: Theoutput location, ulimit and other core dump options are ignored by paldumper.

The Breakpad file is not directly readable from lldb, gdb or WinDbg.  The Crashpad developers are actively working to make the file load directly in lldb without a conversion step.   Microsoft engineers use the minidump-2-core utility to convert the Breakpad captured file into an ELF, core dump format; that is readable by lldb and gdb.

Microsoft Alterations
A few modifications for minidump-2-core were also required. 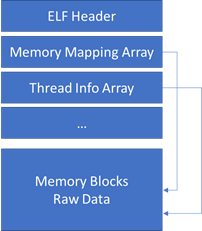 Can I Use PalDumper with any executable?

The answer is maybe.  For example the sqlcmd and bcp utilities have been released as native, ELF based images.   They don’t require SQLPAL or HE so a mini-plus or filtered is not going to be able to add additional memory.   However, a mini or full capture is viable for a Microsoft engineer.

When a program unexpectedly terminated on Linux a core dump may be generated.   Details about core dump behavior are outlined here:  https://man7.org/linux/man-pages/man5/core.5.html.  Also refer to ulimit and /proc/sys/kernel/core_pattern for limitations and storage locations.

As I indicated in my previous lldb post, we are sharing our work.   Our code changes have been discussed and shared with the Breakpad / Crashpad developers for consideration.