The topic is extensively treated. In particular, this blog post does a very good job in explaining why CLR InProc Sxs is useful, and which scenarios it addresses.

So, the first step for me was to create a solution that causes multiple runtimes to be loaded into a process. The following step will then be to do managed debugging in such a process. This is the topic of a post to come, however

. Let’s get started and create the solution then.

Easy approaches (and why they do not work)

Each assembly can reference one CLR, so obviously it’s not possible to load multiple CLRs in one process writing one assembly only,

It is tempting to think, however, that by having different assemblies in one process, each referencing a different version of the CLR, we end up loading multiple CLRs. Let’s try this way then.

Even before you build this solution, you’ll see this icon on the added reference: 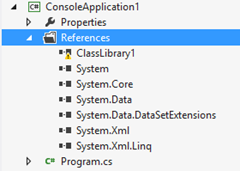 Building gives an error that is pretty self-explanatory:

At startup, CLR2 would be loaded, and the reference to an assembly targeting the CLR4 would force that assembly to be run in a previous version of the CLR. This is not supported.

Follow these steps (you can reuse the previous solution)

These two tests have one thing in common: directly referencing types between different versions of the CLR does not cause multiple CLRs to be loaded. This is logical, because a direct reference between types implies that they live in the same AppDomain. Having different CLRs loaded, however, means that these CLRs live side-by-side in the same process, separate from each other. This means that every CLR has its own Garbage Collector, JIT Compiler, set of AppDomains, and in general all the supporting structures are separate. The obvious consequence is that two .Net objects referencing each other cannot live in different CLRs.

A more serious approach (and why it still does not work)

This excellent post has valuable information on how multiple CLRs can be loaded into a process (see the section “Our Solution Is Not…”):

To take advantage of in-proc SxS, a managed component must be activated by a native host and interact with its environment through a native interop layer such as COM interop and P/Invoke.

The last step fails and displays a message box with this content:

Due to the previous limitation, we have to introduce a native intermediary in the chain of calls.

Follow these steps (you can reuse the previous solution):

Build and run the solution (startup project: ConsoleApplication3). Everything works fine and, if you look at the dlls loaded into the process (again, you can either attach a debugger or use Project Explorer), you’ll see that both mscorwks.dll (CLR2) and clr.dll (CLR4) are loaded into the project.

Note: You would get the same effect (CLR2 and CLR4 loaded) by reversing the CLR versions in the projects. In other words, if ConsoleApplication3 had Target Framework version 4.5, and ClassLibrary3 had Target Framework version 3.5, the end result would still be to have CLR2 and CLR4 loaded in the process, only in the reverse order (CLR4 first, then CLR2).

In the next post, we’ll use this solution to show how managed debugging works with CLR InProc SxS. Stay tuned!