On February 6, 2017, the Microsoft Azure AD team announced the public preview of Azure MFA cloud based protection for on-premises VPNs.

This is facilitated via a downloadable extension that integrates directly with the Windows Server Network Policy Server (NPS) role.

With the NPS Extension for Azure MFA, which is installed as an extension to existing NPS Servers, the authentication flow includes the following components:

How is it set up?

The setup of Windows Server NPS is very simple, install the Windows Server role, configure NPS for VPN access via RADIUS with a shared secret, set up a connection and network policy and you’re set.  More details listed here: https://technet.microsoft.com/en-us/network/bb545879.aspx

Next configure the VPN server to point to your RADIUS server (i.e. NPS), this can be Windows Server RRAS or a 3rd party VPN server. The NPS extension is installed directly on the Windows Server NPS server and registered with an Azure Active Directory tenant where users are enabled for Multi-Factor Authentication.

The following is a diagram of my environment (all hosted on VMs in Azure): 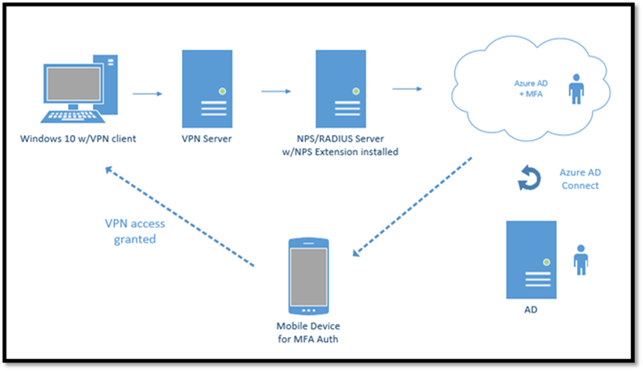 Here is a quick video of it in action: