Results from “The Great Canadian Appathon” 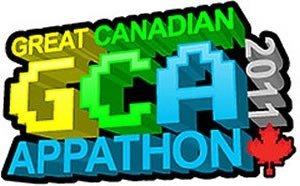 Today, at Yonge Dundas Square in the heart of Toronto, the three finalists for the Great Canadian Appathon, a 48-hour programming marathon to create games for Windows Phone 7, showed their creations to the judges. Their apps were:

The Great Canadian Appathon was a contest open to Canadian post-secondary students where they were challenged to write a great mobile game for Windows Phone 7 (the official mobile platform of the Appathon) in a 48-hour marathon session on the weekend of March 9th. The event was put together by the Toronto-based mobile game development shop XMG Studio with the help of the National Post, KPMG, Telus and Microsoft. As the Windows Phone guy on Microsoft Canada’s Developer and Platform Evangelism team, I was only to happy to catch the final round.

In the end, here’s how it broke down: 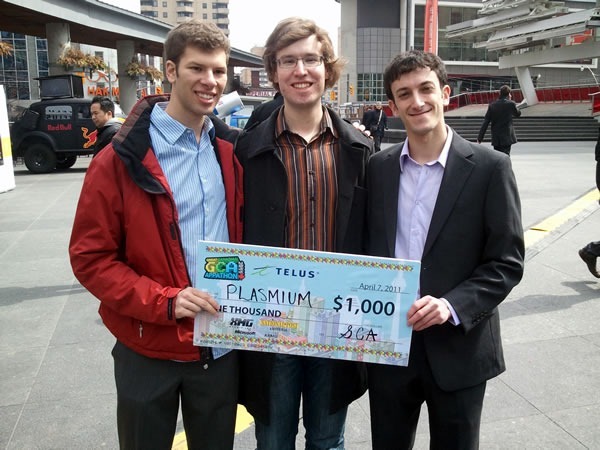 Plasmium takes its inspiration from the visual style of the Xbox 360 game Geometry Wars , sticking to “simple shapes but glowy particle effects and bright colours”. It was part stylistic decision, but also part pragmatic: they didn’t have an artist on the team.

“We’re all programmers of course,” said team member Michael Hoffman, “so we decided right from the beginning to overcome our lack of artistry [by using] procedurally generated graphics. And it looks very nice even though you can make those sort of graphics with just programmers drawing triangles.”

Plasmium’s team is from McGill and consisted of Michael Darwish, Michael Hoffman and Marek Zaluski. 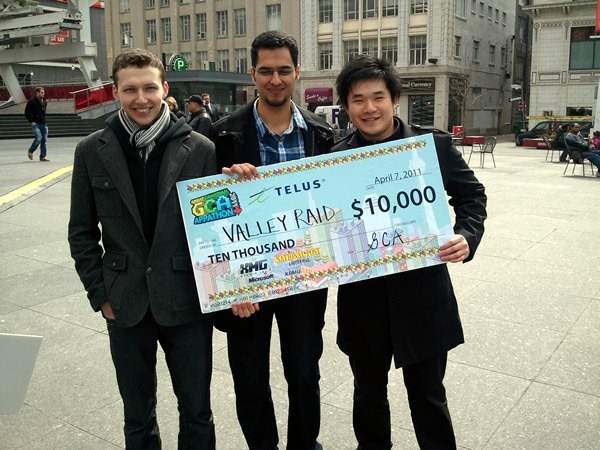 Valley Raid is based on the classic Atari 2600 game River Raid, Activision’s scrolling shooter from 1982. Like River Raid, Valley Raid has the player piloting a fighter plane through a valley, destroying enemies and obstacles and picking up power-ups along the way. Unlike its ‘80s predecessor, Valley Raid is a 3-D game; in fact, it was one of only 3 out of more than 50 submitted to the Appathon that were 3-D.

“Because the game we chose was a 3D game and a 3D game is really tough to do, so the time was so short on us that we just had to code as fast as we could,” said team member Mahdi Tayarani Najaran.

Valley Raid’s team is from UBC and made up of Eason Hu, Mahdi Tayarani Najaran and Ben Sheftel. 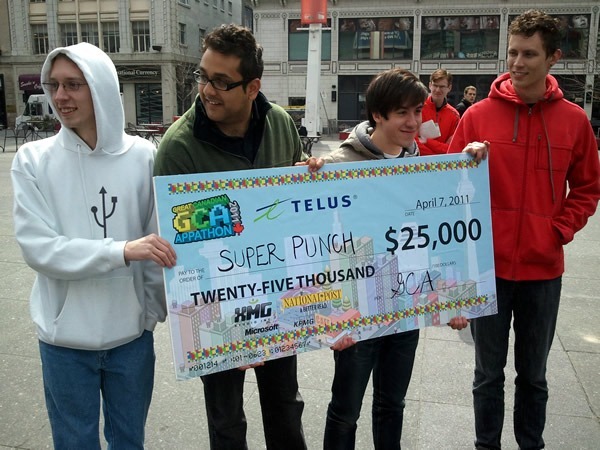 Super Punch is a physics-based game in which you control a superhero who continually punches a supervillain through the air for maximum distance. Success lets you score points which you can use to buy upgrades to eventually be powerful enough to send the supervillain into space.

“We love the condensed time line because we come up with everything off the cuff and its all from scratch, you just have to come up with something really quick,” said team member Pieter Parker. “A lot of ideas died that first day, but one made it out and that was Super Punch.”

Here’s a video of Super Punch in action:

Congratulation to the winners, and thanks to everyone who participated!